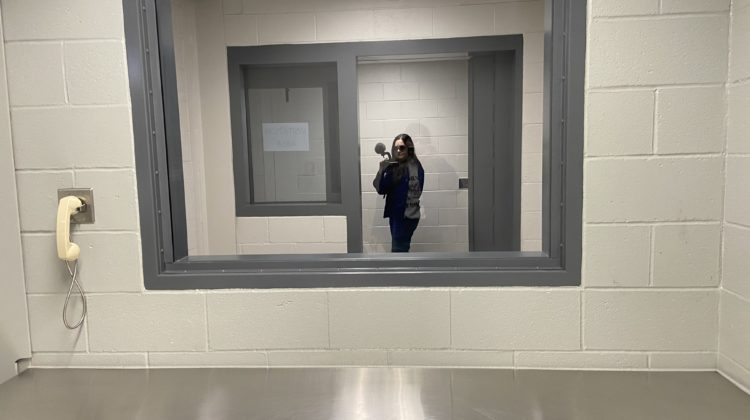 The Los Angeles Police Department hosted a grand re-opening of its Harbor Jail on Feb. 10. Police officers gave tours of the facility to the press and the community. The main purpose of re-opening the Harbor Jail was so that patrol officers who work at the LAPD Harbor Community Police Station do not have to drive to the 77th Street community police station to book detainees after arresting them, Alex Rodriguez, detention officer, said. The 77th Street station is in downtown Los Angeles and driving there reduces the officers’ time in the field.

The Harbor Jail has 65 beds, 45 for men and 20 for women, Rodriguez said. On a typical day, there will be about a third of that number detained there.

Most detainees will stay three days, said Lt. Thomas A. Mason, the officer in charge of the jails in the Harbor Area. They are taken to court from the harbor facility or released on bail. Once they leave the facility, they will not come back unless arrested again.

The LAPD Harbor Community Police Station, which houses the Harbor Jail, opened in October 2009. The jail was operational for nine months, said LAPD Chief Michel Moore, until budget cuts led to its closing.

“It was so disappointing, I remember then the shuttering of this jail because the workforce of the LAPD shrank [by] nearly 1,000 civilian personnel,” Moore said.

The city was dealing with budget deficit and did not have the money to staff the Harbor Jail or other jails in the region.

The LAPD still has about 600 fewer civilian employees than it did at the department’s height in 2007 or 2008, Moore said. However, the past three years the LAPD has been bringing more civilian personnel into the department. This allows more police officers to be in the field and on patrol.

Detention officers are not allowed to carry lethal weapons inside the jail, including handguns and batons, Rodriguez said.

Instead, they carry tasers and pepper spray. The detention officers have special training. The additional funding that the LAPD is receiving from the city pays for more of them. There are some training in their academy, which takes about three months.

Part of their training includes technical training, specifically on how to use their digital video monitoring system, Rodriguez said. There is a camera in every cell, which is one of the renovations prior to the jail being re-opened. From a monitor, the officers can access the view of every cell, as well as other portions of the facility.

In addition, at least one (but usually two) of the officers are behind a large one-way mirror where they have view of the cells for all the people that have already been booked, said Juan Carlos Romero, senior detention officer. These cells include both the male and female cells and there is a wall that can be lowered electronically between the two areas when both men and women are being held at the facility. Otherwise, the area is open and detainees have access to the entire area on the bottom floor outside their cells during the daytime. They can watch television and make phone calls. The cells on the second-floor house detainees who are kept separate.

In addition, there are several cells to hold detainees before they are booked, Romero said. The detainees are separated by sex as well as by severity of the crime they allegedly committed, with a different holding cell for misdemeanors and felonies. There is also a “drunk tank” with no benches, but a soft floor to prevent inebriated detainees from hurting themselves.

Detainees are served three meals a day, Romero said. There is a general diet plan, but also more specialized options available, such as kosher options, or options for lactose intolerant or diabetic detainees.
In addition to the cameras, every cell has a recording device, as well as an intercom, Romero said.