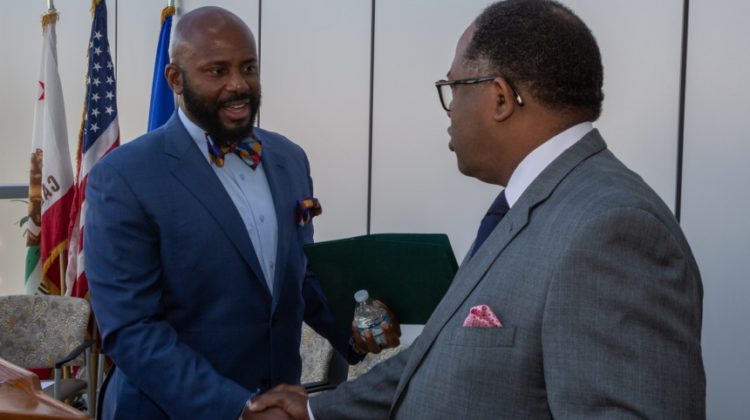 Sixty-fourth District Assemblyman Mike Gipson is running for reelection for the third time. The case he’s making to prove he should get a fourth term isn’t about proving his progressive credentials. He’s trying to prove he has vision enough to solve his district’s most intractable problems, such as the proliferation of untraceable gun sales over the internet, repairing the state’s foster care system and making progress against the homeless crisis.

The daily work of the state’s legislature often gets overlooked until the hundreds of bills passed by the state assembly and senate throughout the year are signed into law by the governor then released to the public by the secretary of state at the beginning of the new year. Gipson visited the offices of Random Lengths this month and recapped his district’s legislative successes.

The Courage Campaign has in the past dinged the assemblyman for his systematic failure to support issues related to the environment, health care expansion and wages.

The Courage Campaign scorecard is based on a 100-point system that measures legislators’ progressive values according their voting record on specific sets of bills identified by groups such as the American Civil Liberties Union, the Coalition for Humane Immigrant Rights Los Angeles, the Sierra Club, the Drug Policy Alliance and the Western Center on Law and Poverty.

Gipson was dinged mostly on votes from which he abstained. Those included bills on improving the environment, protecting due process and increasing pay for workers on holidays. While Gipson received his lowest score (53) in 2015, followed by his highest (90) in 2016, then scored in the 60s and 70s until his 2019 rating of 80.

In our meeting at RLN, Gipson focused our attention on employment, education, homelessness and public safety.
“Today, the unemployment rate is 5.8 percent,” Gipson began. “It was 12 percent in 2014.”

He reminded us what else was going on back then — Compton Community College was hemorrhaging students and had its accreditation taken away, while the Community College District was stripped of control of the school following the indictment of a college district trustee for corruption. After 10 years operating as a satellite campus under El Camino College, Compton College’s accreditation was restored three years ago.

Gipson explained when he took office in 2014, he was being told that the college wasn’t going to be able to get its accreditation until 2027. In 2016, Gipson secured $11.3 million to aid the trusteeship in getting back the school’s accreditation.

Gipson touted the signing into law his legislation, Assembly Bill 79, which banned ghost guns– essentially gun parts and gun making materials sold online separately, allowing the purchaser to build a gun nearly from scratch without a way to track said gun or background check the individuals buying the parts.

Gipson, a reserve police officer, cited the deaths of two police officers killed with ghost guns over the past three years as reason to author the legislation. Though the law was enacted in 2020, it ordinarily would have required time to set up the regulatory means to track the guns in the first place. But with the help of a justice department grant, the law was effectively launched at the start of 2020.

Another piece of legislation Gipson highlighted was AB 1032 in which social workers are made to provide an explanation for moving a child out of his or her home. The idea is to reduce the number of times a child is moved in the system.

“Social workers have to provide an explanation before moving a child out of a home,” Gipson said. The assemblyman noted a companion bill, AB 175 –foster youth bill of rights– had also been signed, explaining that it hadn’t been updated in 30 years.

“Foster care parents are required to provide hygiene products and not required to refer to a child by their preferred pronoun,” Gipson said.

Gipson referenced documented instances in which children whose gender identity is not accepted suffer from abuse, neglect or loneliess and have higher rates of suicide. He was particularly passionate about ending the practice of some foster parents calling the police on their charges for minor infractions such as not eating their vegetables or not taking a bath.

Saying it cannot be allowed to fail, Gipson touted the securing of nearly $42 million to set up a foundation for the Martin Luther King Jr. Community Hospital, which will be used to acquire top-tier doctors with high pay.
He also highlighted the opening of the Jeffrey Smith Sickle Cell Center, at MLK hospital, one of six in the state of California, that are to be set up with the $15 million Gov. Gavin Newsome allocated.

The sickle cell disease (or sickle cell anemia) is a blood disorder caused by inherited abnormal hemoglobin, which then causes red blood cells to distort and become sickle cells.

These sickle cells are fragile and are easy to rupture. Anemia sets in when these cells rupture and the number of red blood cells decrease. In addition to rupturing, sickle cells can block blood vessels, which can cause organ and tissue damage as well as pain.

Jeffrey Smith, son of Gil Smith (second mayor for the city of Carson) suffered sickle cell. Gipson noted that Jeffrey was a patient at MLK hospital where his mother worked as a nurse.

Gipson touted the $3 million from the state for the rehabilitation of Compton Creek, a polluted tributary of the Los Angeles River long desired and planned as green space.Gipson noted that because of the Trump administration’s regressive Environmental Protection Agency policies on water local legislators are hoping to rely on congressional representation for protection against Trump.

Gipson touted Gov. Newsom for pouring $500 million into housing in the state and the passage of AB 1906 to soften California Environmental Quality Act requirements.

The three-term assemblyman noted that on the first Thursday of March of every year he’s been in office, he camps out with his homeless constituents to better understand their needs and to hear from them. He explained that in 2019 he learned just how vulnerable his unhoused constituents are.

He recounted being robbed by gunpoint while with his homeless constituents.

“A lot of times, homeless people have some money and a cell phone,” Gipson explained. “But if you are on crack or crystal meth, that’s enough money to get a fix.”

The reserve police officer recounted a 2017 incident in which two men beat homeless people with baseball bats because they were homeless in downtown Los Angeles’ fashion district\. This led Gipson to author a bill that would have expanded California’s hate crimes law to include listed homelessness. He couldn’t get the bill out of assembly.

The author put out two more bills when SB 50 failed. Gipson pushed back against the notion that Los Angeles electeds favored Nimbyism rather than building more housing to relieve the housing crisis. Gipson argued that the opponents of SB 50 gave the bill’s author, Scott Wiener (D-San Francisco), the ability to resubmit bills with their input so that it could pass.

Gipson argues there wouldn’t be a crisis if Gov. Jerry Brown hadn’t abolished the Community Redevelopment Agencies. Gipson and 53rd District Assemblyman Miguel Santiago authored AB 1906, which will reform CEQA and get people off the street and into homes with wraparound services.

Unlike in past races in which he faced an upstart Republican contender, Gipson is facing a challenge from the left in Fatima Iqbal-Zubair, a public school teacher who once served as Gipson’s education commissioner, a volunteer position intended to keep the assemblyman informed on the designated issue and carry out a variety of delegated functions. Iqbal-Zubair is also affiliated with the 501 political action organization called the Sunrise Movement. The Sunrise Movement is concerned with supporting the Green New Deal and fighting climate change.

But with a $400,000 warchest and name recognition on his side, it’s hard to imagine him not winning his fourth term.