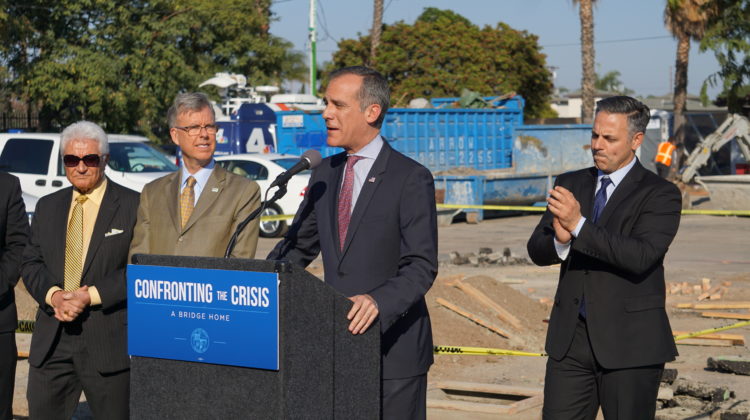 Construction began on the San Pedro site about a week prior to the groundbreaking, Moore said. Construction crews are working on the site 12 hours a day six days a week. It will feature a membrane structure that is 60 feet wide and 160 feet long. It’s an acre wide and will house 64 men and 36 women. In addition, it will have a pet area.

Both sites will feature a hygiene trailer which will have seven toilets and showers as well as four washers and dryers, Moore said.

The bridge shelters should open the middle of June, said Amber Sheikh Ginsberg, the head of the Council District 15 Working Group on Homelessness.

Both sites will have onsite private security and the surrounding communities will receive enhanced clean-ups by Los Angeles Sanitation and Environment five days a week, Buscaino said.

There has been little opposition to these projects, aside from the opposition at the community meetings in Wilmington, said Los Angeles Mayor Eric Garcetti.

“There are always people who fear and I understand that fear,” Garcetti said. “You have to hear people, but my experience so far at every single one of these that opens is that all those fears don’t come true.”

Garcetti was present at the Wilmington groundbreaking. He was absent at the San Pedro groundbreaking because he was in Sacramento earlier in the day with Gov. Gavin Newsom. Newsom is laying out a directive asking for anyone to help with the homeless crisis.

“We will use any piece of property,” Garcetti said. “We inventoried all of our properties about four years ago now. So we know what will work, absolutely. And we know what won’t, sometimes it’s just a little sliver of something you can’t put anybody on.”

Newsom has put together a strike team across different city departments to work together on homeless issues, Garcetti said.

The city previously opened a shelter in Watts and two former homeless people who live at the shelter spoke at both groundbreakings. Kelvin Bryant lived on the streets for seven years and was in shelters before, but did not care for them and expected the same from the bridge home.

“I thought it would be like any other shelter,” Bryant said. “You go in there and you smell the smell and you get up and you get out and people treat you bad. But this one, it’s like they’re almost family there.”

Since coming to the bridge home, Bryant has died on the operating table, but he had a bed to come back to when he was revived.

“I was living off potato chips on the street, that’s how I had my first heart attack, because I could afford nothing else,” Bryant said.

Bryant did not have any teeth when he went into the bridge home, but he now has a full set. He recently signed a lease on an apartment.

Bryant is no longer able to work due to his health, but he said if people needed their houses painted or their grass cut, he would do it for free.

The other resident of the Watts bridge home who spoke was Laverne Green, who was living in her Cadillac for more than a year after getting divorced and going bankrupt. She is a registered nurse in Los Angeles and has been working for more than 40 years. She was the last woman to initially get a place in the Watts shelter and this was only because the previous woman who was selected to take the last spot dropped out.

Before she entered the shelter, Green decided she would try living there for 60 days and she thought she would spend those days sleeping. But the people at the bridge home believed in her and she changed her mind.

“I said I’m more than what you see right now,” Green said. “I want to work, I want to give back. I’m 61 and everybody says just go on social security, you’ll get your house and you’ll just sleep in a house, that’s it. I said no, no, no, I have to work. Forty years [of being an] economic producing individual. That’s all I’ve ever known.”

Green had lost her qualifications as a registered nurse, but the Salvation Army helped her get them back and she is currently looking for a job and permanent housing.