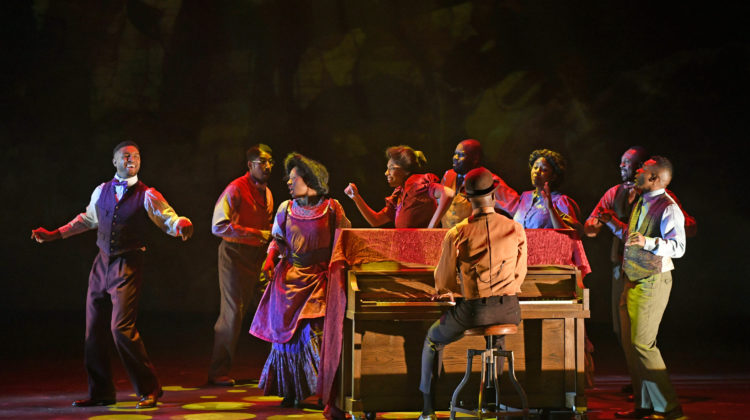 Even without having read E.L. Doctorow’s 1975 novel Ragtime, it’s clear a lot falls through the cracks in the 1998 musical adaptation. Several characters are never quite developed; certain plot lines simply fizzle out. Worse still, the music is sometimes saturated in mawkish melody and metaphor. This is far from perfect art.

But don’t let the perfect be the enemy of the good. Clearly, the good of Ragtime: The Musical outweighs the bad. And considering that Musical Theatre West’s presentation is just about perfect, there’s a lot of reason to see this show.

Meet the Whites. Well, that’s not their surname ― they don’t have one ― but it may as well be. Bedecked all in white (what else?), an extended family of five are mansion-dwellers in New Rochelle, where there are “Ladies with parasols, fellows with tennis balls / There were gazebos… and there were no negroes.” Strictly speaking, this isn’t true, considering that a major plotline concerns a black washerwoman from just down the road abandoning her baby in the Whites’ garden, but you get the idea. It’s 1902, and New Rochelle is a bastion of old-school white patriarchalism. But in NYC, just 25 miles down the road, new musics, movements, and mélanges are blooming and teeming.

At bottom, Ragtime is about culture clash ― specifically, what happens to the old order when immigrants try to find their place in the New World and African-Americans try to improve theirs. These stories are personified primarily by three sets of characters: Latvian immigrants Tateh and his daughter, ragtime virtuoso Coalhouse Walker Jr. and washerwoman Sarah, and of course the Whites. Real-life historical figures such as Booker T. Washington, Harry Houdini, and anarchist Emma Goldman weave their way into the action as minor characters, but the emotional weight is completely vested in the main groups.

The demarcation of these groups in the opening number gives us a glimpse of what’s best about this show. A perhaps necessary but overly long series of first-person character introductions culminates gloriously with the three groups, bedecked in their distinct color schemes (subtly royal purple/brown/red for the African-Americans, grays and etiolated hues for the immigrants, and the Whites), blocked next to one another, the ensemble joining in the final notes to make their voices heard on high. It’s a preview of how director/choreographer Paul David Bryant will get absolutely everything right for the next 150 minutes, shining brightest in the biggest moments.

To get going, though, we have to wade through some of Ragtime‘s most flawed material. The second number, “Goodbye, My Love”, sounds like the finale of a weak Disney musical, is tonally misplaced so early, as is “Journey On”, its three characters not yet well enough established for their polyphony to pay off. Nothing wrong with the performances; it’s just that this part of the blueprint could use some revising.

But hang in there, because composer Stephen Flaherty is, if not a supreme architect, a highly able craftsman. Aided ably by lyricists Lynn Ahrens (of Schoolhouse Rock! fame), within 20 minutes we get “A Shetzel Iz Amereke” > “Success”, which masterfully moves Tateh and daughter from the highs of reaching the Land of the Free into a downward spiral through the dark side of the immigrant experience. Gary Patent brings such a gentleness of soul to his Tateh that his anguish and humiliation at his early failure to make a good life for his daughter is absolutely gut-wrenching.

Although Flaherty and Ahrens deliver some groaners throughout the evening (it’s hard not to squirm when Mother and Tateh, watching their children play, sing “One so fair / The other lithe and dark […] Forever hand in hand”; and the heavy-handed metaphorizing of “The Wheels of a Dream” and its Model T driving down the road toward equality is a bridge too far), but Flaherty’s craftsmanship is such that even his worst melodies usually evolve in such a way that by the end of the song you’ve pretty much forgotten its inauspicious beginning.

And plenty of songs find sure footing from start to finish. “Nothing Like the City”, a train-platform encounter between Tateh, Mother (Jessica Bernard), and those kids (Maya Somers and Malakai Basile), is both cleverly constructed and deeply touching for its portrayal of the power of simple common decency. In Act 2, Tateh is again the benefit of Flaherty/Ahrens’ smartest work, as “Buffalo Nickel Photoplay Inc.” makes a silhouette metaphor from Act 1 pay off handsomely.

Although the entire cast is, quite simply, fab, special mention must be made of Terron Brooks as Coalhouse. With his earliest leads confined to a low register, you don’t realize what an effortlessly supreme singer he is until he leaps to a sustained high note in “New Music” (a metaphor that works despite its obviousness (and it better, because this ain’t called Ragtime for nothing)). From there, he gets a series of vocal hurdles, which he clears so easily it’s like the motherfucker is showing off.

As Sarah, Brittany Anderson has her work cut out for her playing opposite Brooks. Because Sarah literally does not open her mouth until more than halfway through Act 1, it better be good when she finally does. Anderson isn’t good: she’s great. With “Your Daddy’s Son”, Flaherty/Ahrens have created a powerful showcase for the pain and shame of a mother singing to the baby she abandoned for dead in a moment of utter hopelessness. Anderson is tailor-made for the task.

The costumery of Musical Theatre West shows is always great, but I’ve never liked it better than what Tamara Becker does here. The stark contrasts so effective in the opening number give way to increasing variety and mixture, with all of the main characters taking on new colors and even entirely new outfits as their experience and the world around them evolves. Simultaneously subtle and lush, Becker’s work could not better serve the overall production.

That goes double for Paul Black’s lighting. Perhaps you won’t notice what Black is doing in Act 1, but from the start of Act 2 there’s simply no missing his mastery. Alone at centerstage, as Coalhouse laments the loss of both Sarah and his hope for progress, the white light around him almost imperceptibly cycles toward hotter tones ― yellows, oranges ― eventually giving way to a multicolored explosion of light and striated shadow that would make for an exciting sequence even if you watched it on mute. Throughout the rest of Ragtime, Black’s work regularly dazzles, another motherfucker showing off without stepping beyond the bounds of what best serves the whole.

When it comes off right, Ragtime: The Musical is the sort of show where the entire cast and crew ― leads to ensemble (who get several chances to make huge contributions to the overall effect), director to techs ― ought to feel a profound pride of ownership. On the page Ragtime is a good musical with some obvious failings despite its substantive story/message. With all hands on deck, though, it can transcend its shortcomings to be a great and touching experience. Musical Theatre West delivers exactly that. Well done, all.