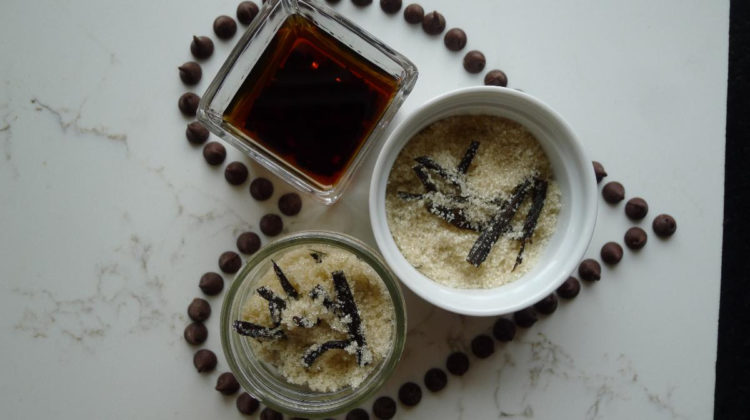 Chocolate steals the show on Valentine’s Day, while vanilla plays the Cinderella. The rest of the year isn’t much different. This is wrong in so many ways, but there is an easy solution to this imbalance: Double the vanilla. In your Valentine’s Day chocolate, in your morning Cream of Wheat, and any other time where sweetness — or the flavor of sweetness — is dominant.

It’s no surprise that vanilla improves the Valentine’s Day treat, even non-chocolate delights. After all, vanilla comes from orchids — the plants with some of the world’s most celebrated sexual organs. Orchids are not easy to grow (neither is the cacao plant, for that matter). The orchids depend on a mature forest overstory and need to be hand-pollinated. The once high price of vanilla enticed more farmers in, and then crashed when the processed food industry embraced artificial vanilla — in part because disasters keep befalling vanilla farmers, disrupting the supply chain.

Many Caribbean vanilla farmers were put out of business by Hurricane Maria, which wiped out most of the vegetation on the U.S. Virgin Islands, Puerto Rico and the Commonwealth of Dominica. If you’ve ever complained about the price of vanilla, try growing it. Needless to say, there is a difference in flavor between real and fake vanilla. Real vanilla contains more than 250 organic components, while artificial vanilla contains only vanillin. Whenever possible, use fair trade vanilla. It will set you back about 5 bucks a pod, but remember, it took at least three years to grow it.

Vanilla comes from the orchid’s seed pods, which are chocolate brown. Yet for some reason this concentrated powerhouse of flavor is usually represented as white, like in vanilla ice cream, as if a flavor this big can simply be invisible. It may have a boring reputation, but the quiet penetration of vanilla has made our plain Cinderella the world’s best selling ice cream flavor.

A 2017 news release from the International Dairy Foods Association credited vanilla ice cream’s popularity to its ability to enhance other desserts and treats. “It tastes great topped by whipped cream and fudge sauce in a sundae, with root beer in a float or atop a warm slice of apple pie,” said Cary Frye, vice president of regulatory and scientific affairs for the IDFA.

The only time that it’s possible to add too much vanilla is when it’s in the form of alcohol extract. In that case the problem can usually be solved with added sugar. For the purposes of doubling, and perhaps quadrupling, the vanilla, I prefer glycerin extract. Vanilla powder is also for sale in the baking goods section.

One morning I tripled the amount of vanilla in the kids’ French toast, from a teaspoon to 1 tablespoon, and they didn’t notice. The next morning, I doubled it again, and they said I could still add more. I ran out of bread before I reached their point of too much vanilla, so the next day I added a tablespoon of vanilla to the batter for two servings of pancakes.

“I don’t taste it,” said boy No. 1, who was already done with his serving.

“It’s good. But needs more, actually,” said No. 2, the cook in the family. He proceeded to arrange his pancakes into a sculpture, down which the maple syrup ran and pooled like a garden fountain.

The bowl of pancake batter had enough left over for one more pancake. I added another tablespoon of vanilla. The consistency immediately became more runny, but since I make a thick batter it was fine. The batter also darkened a shade.

The pancake emanated a pleasant vanilla perfume and had a more chewy consistency, probably because of the glycerin. Son No. 1 was no longer finished. We tore it apart like hyenas on a carcass. The pancake clearly tasted sweeter because of the vanilla, even though it added no actual sweetness. The next morning I added chocolate chips to the batter and skipped the maple syrup, for roughly the equivalent amount of sugar in the pancakes, but with an extra decadent feel.

After the kids got on the bus, things took a more adult turn. I started with a simple chocolate paste of cocoa powder, sugar and cream, mixed until stiff like truffle ganache. I then proceeded to double, and redouble, the vanilla, adding it like a drunk pouring liquor straight into a mixed drink. The chocolate got progressively richer. And stronger. As did my buzz. By the time I added coffee, my smile had pretty much turned into a circle.

The above process is half recipe, half science project, and half journey of self-discovery. It’s a way of finding out if there really is such a thing as too much vanilla.

Meanwhile, I will leave you with an easy way to enjoy vanilla flavor straight from the pod, by extracting it yourself with sugar, which more than chocolate is the true soulmate of our Cinderella. Vanilla adds fragrance to sugar, while sugar adds a sweet body for the vanilla fragrance to inhabit.

The first step is to cut off both tips and split the pod from end to end, to let out the pungent little seeds.

For a simple sugar extraction, simply chop the split pod into manageable sized pieces, and add them to your sugar bowl.

Another great material with which to extract vanilla is bourbon. It’s oaky caramel flavor dances nicely with the vanilla, and can handle a little sweetness. Bourbon also contains alcohol (little known fact, I know), which is a great medium in which to extract vanilla flavor.  Chop a split pod and add the pieces to some fine bourbon, and wait a few days, or ideally a few weeks. Alternatively, splash bourbon to a cup of vanilla sugar, if vanilla isn’t enough brown flavor in your sweetness, and you can’t find any chocolate.