Pogi Silog Branches Out With V... 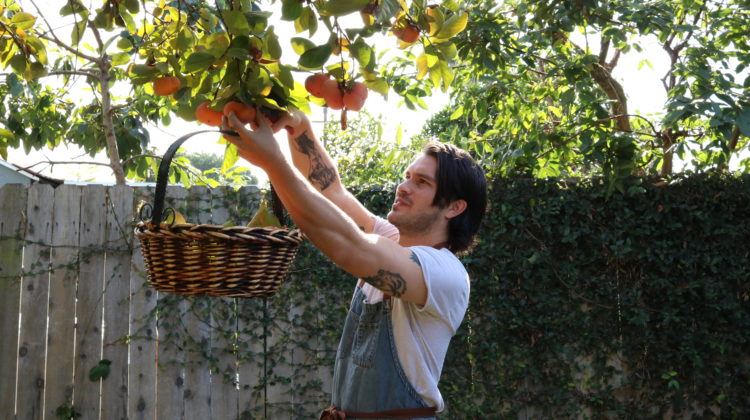 James Republic alumnus Brennan Villareal has worked in the food industry for eight years, but his life as a chef has been anything but a business for him.

“I just like to make food that tastes good. Once it stops being fun then I won’t like it,” said Villareal.

Villareal, who is Filipino American, cuts persimmons from his ancestral home in the Wrigley neighborhood of Long Beach. He has embraced meditative qualities in preparing dishes such as tofu-based spam or mushroom-based sausage in the style of longanisa. Villareal recognizes he has mellowed down over the years.

“I am driven and ambitious, but it helps having a good attitude. I feel it carries itself in what I do. It’s not about the money and more about the quality of life,” said Villareal.

Villareal has been working at Chinatown-based restaurant Lasa, run by the Valencia brothers. On his days off, he hosts Filipino-inspired vegetarian pop-ups as Pogi Silog around venues like Rose Park Roasters and Commodity. When he’s not dreaming up dishes, he’s writing music, poetry and remembering times he used to surf ever so frequently.

Although Villareal is not a vegetarian, the restrictions he sets with his menu has allowed him to experiment with Filipino cuisine, ultimately appealing to more palettes. Since Filipino dishes rely heavily on fish sauce and shrimp sauce, he has found creative and more affordable solutions such as gluten-free tamari.

RLN: How do you feel about Filipino food in Long Beach?

BV: Everything seems the same with outgoing vibes. Not many like to jump outside the box when it comes to Filipino food, even though there’s plenty of establishments like Tambuli market with turo turo to-go food. These places are just not as consumer-friendly to non-Filipinos.

RLN: Do you recall instances when “pogi” and “silog” were used around you when growing up?

BV: Growing up in an Filipino American household, we weren’t accustomed to all Tagalog terms. However, the food and the flavors were there. I remember when I was little, I dressed up all spazzy. My grandma would tell me I looked “pogi,” which means handsome. I didn’t really know what silog meant until I got older, but I sure did grow up eating a lot of fried rice and eggs.

RLN: How has your experience as part of the kitchen team at LASA led up to your current endeavors?

BV: I’d say the way we present ourselves is more of a family. We have a lot of pride and love for the food we cook and create. Watching everyone operate humbly and calmly has been inspiring. I feel like it all reciprocates back to how I operate as a chef and an individual. Lastly, we all just have fun.

RLN: Is there a Filipino dish you have yet to experiment with?

BV: There are so many Filipino dishes that I’ve barely scratched the surface. For the most part, I’ve been into Filipino desserts right now. It also just depends on the season and what fits in. I have three ideas, like a coconut, egg and gravy with pandesal.

RLN: What taste has been the most challenging for you to create your meatless rendition of?

BV: I don’t think it’s been very challenging. The part that is challenging is finding different ways to make a dish without the use of fish sauce and bagoong, which is fermented shrimp paste.

RLN: What can we expect for your food endeavors in 2020?

BV: I am planning to have more chef-driven collaborations and a residency at the Marina Farmers Market in Long Beach. Plan to see a lot more of Pogi Silog!

RLN: If you could give a dish to a public or historical figure, who would it be and what would the meal be?

BV: Marvin Gaye. The favorite comfort Filipino dish will always be my mom’s chicken adobo with rice. I feel like it’s always the perfect choice for any newcomer to Filipino food. It’s good for the soul.

RLN: Do you have any favorite restaurants in the South Bay area?

BV: I haven’t been to the rest of the South Bay much, but I’d have to say Little Sister in Redondo Beach. It’s a casual, upscale Vietnamese restaurant that perfectly balances citrus, herb, fish sauce and salt in many of its dishes.