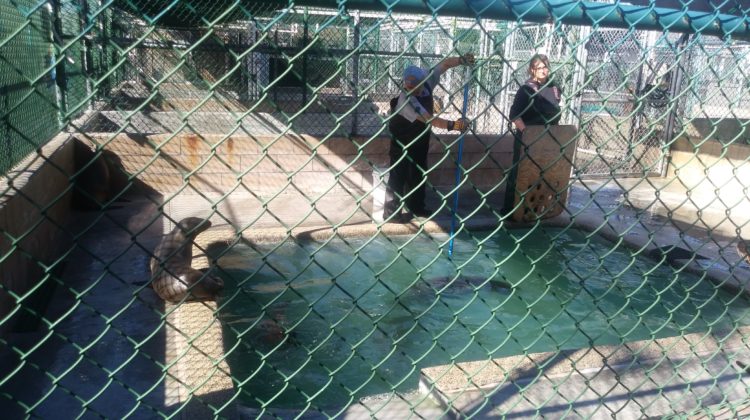 In the Jan. 23 issue of Random Lengths News, the newspaper reported about how three years ago, Harcourt Brace Jovanovich, a textbook publishing giant that invested in other industries to diversify its business holdings, was looking to extricate itself from the Marine Mammal Care Center.

Amber Becerra, the current president of the board of the care center, said it informed the care center that it was going to just walk away, even though it had been financially supporting the care center since its inception. This led Jeff Cozad, who was board president at the time, to create a new 501(c)3 to fill the void left by that company.

To gain perspective of the Marine Mammal Care Center as an institution and understanding as it evolved through the years, Random Lengths News reached out to former board members of Mar3ine. This nonprofit was put together by advocates who were concerned about the welfare of the animals at Marineland. To say they were angry about Marineland’s sale to SeaWorld and the subsequent news reports of the animals being mistreated resulting in trainer injuries would be a massive understatement.

Becerra and the board laid off six people working in the fundraising, development and community awareness capacity at the care center.

“Now, 80 percent of every dollar that comes in goes directly toward taking care of the animals,” Becerra said. “Only 20 percent of that goes toward overhead.”

If this is true, that would mean that $800,000 will be going to animal care when historically the dollar amount was only about $100,000, an eight-fold increase if salaries in the animal care department aren’t considered. However, the volunteers, however, will likely continue to hold their breath to see if more money will go into the care of the animals. A few volunteers after the publication of this story online called the newspaper to report some of the ways management has cut corners on animal care during lean financial times.

Animal Care Versus Fundraising Overhead
The care center still has a robust 150-person cadre of volunteers, who are each scheduled four-hour shifts. In 2019, the care center clocked 30,000 volunteer hours. But some are saying that management’s promise to shift more resources to animal care can’t happen soon enough.

One volunteer reported that it was routine to feed the animals vitamin fish — fish stuffed with four or five vitamins — for each animal after their morning meal. After Cozad’s departure, they were told they could no longer afford vitamins.

“How did we go from such excess to not being able to give the animals vitamins?” the volunteer asked. “We’re an animal hospital. The primary expense should be food, medication and medical treatment for the animals. How did we get here? Now they’re asking us to go to Costco to get the animals fish oil capsules…. Seriously?!”

Dr. Palmer explained that fish is purchased in bulk a year at a time. When the fish are caught, they are immediately frozen and kept at frozen temperatures until it reaches the point of sale. Dr. Palmer explained that last year’s batch appeared to have been thawed then refrozen before reaching the facilities, but investigations could not pinpoint exactly where in the transhipment process this occured.

“In 13 out of the 14 years, we have been the second busiest [animal] hospital in the country,” Palmer said. “That’s brought in 5,000 animals…. That case load would be very difficult to manage with the current standard of care without a full time veterinarian.”

Becerra noted that the board recently elevated Dr. Palmer to hospital director in addition to her duties as a full time veterinarian who’s on call 24 hours a day, seven days a week.

“This is stuff that she was already doing, but no one was really recognizing,” Becerra said. “It was all falling to her. So we wanted to make sure there was a clear cut methodology to operations at the hospital.”
Becerra noted the board has been paying attention and has been considering hiring a part-time veterinarian to help take on some of the workload.

“We survive on individual donations and corporate donations,” Becerra said. “We don’t have a lot of guaranteed government funding…. Our whole board is now all-volunteer, working night and day to get the Marine Mammal Care Center to financial sustainability. We don’t have this huge budget differential where what’s coming in isn’t matching what is needed to operate.”

In the mid-90s, Harcourt Brace Jovanovich set up the Foundation for Marine Animal Husbandry to help fundraise for the care center, but the nonprofit’s effectiveness was hindered due to it being a Florida-based nonprofit, Becerra explained.

“There was a big disconnect,” Becerra said. “They set up that entity because there were some people wanting to give donations but they would be giving those donations to Harcourt Brace and that didn’t make any sense.”
Becerra believes the Florida nonprofit didn’t do enough to get the care center into a good place from a nonprofit organization perspective. It wasn’t until the care center split off into its own nonprofit that it started raising money, she said.

“To be fair, under Jeff’s management, he was able to raise somewhere around $400,000 in individual and corporate donations each year since founding the Marine Mammal Care Center nonprofit,” Becerra said. “But when your budget is $1.6 million, it just doesn’t touch it.”

Becerra noted that they never knew how much funding they would receive from one year to the next and that the amount was based on the number of animals cared for the prior year.

“Myself and the board worked really diligently with the county and city officials to get a line item in the budget for this resource because it is a county asset and it is a city asset,” Becerra said. “We’re taking in animals that are washing up on our beaches that could be dangerous.”

Becerra acknowledged that those who are somewhat aware of the care center’s history believe the nonprofit was operating off a huge endowment, which is true for some nonprofits.

The former bankruptcy attorney noted that if the care center had a $20 million endowment, it probably would be able to operate off the interest while the $20 million sat in an account untouched.

Becerra noted that the endowment care center did receive was only enough to tie the nonprofit over for a few years until it found other funding.

“There’s not much of that endowment left,” Becerra said. “It should have been more in my opinion because they did have the ability to give more but they just wanted to be done with it.”

Becerra noted that no one really knew what would happen to future donations and future financing to sustain the organization.

“We all can look back and say we should have done this or that, but at the time nobody knew what would transpire,” Becerra said.

The board makeup as it currently stands is made of people who have served three years or less. The majority of the board members have served less than a year and they are all women with very deep experience in operating nonprofit organizations.

“We do have a pretty diverse backgrounds of experience on our board,” Becerra said.

Indeed, Becerra is ready to look forward and hoping that the care center’s volunteers and its supporters are too.

“We now have four super-strong women leading this team and it’s pretty awesome and we get along well.”