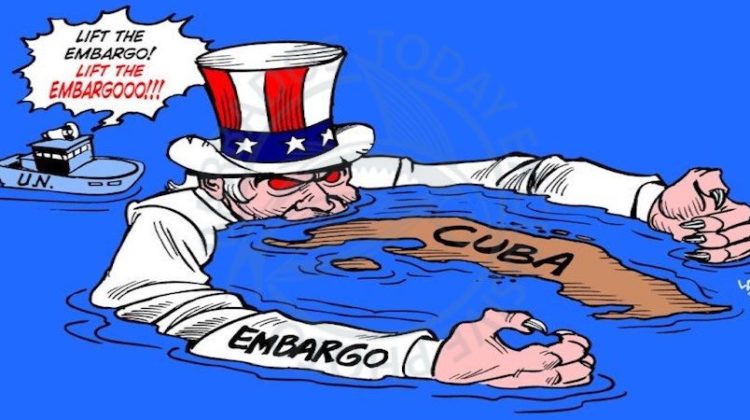 Filling a decade-long gap in the existence of a Los Angeles-based committee that advocates normalization of relations with Cuba and an end to the blockade and embargo, nearly 30 participants, overwhelmingly Latinx, youth, students and young workers met in Hawthorne, Ca. February 1.

The initiative comes from recent a visit and participation by Ánimo high school students to an international environmental conference Cubambiente, where they presented their research, education and action campaigns against the proliferation of ocean plastic pollution, which has extremely detrimental effects on all marine organisms, and humans.

Brenda Lopez, chaired the meeting and discussed her experiences as part of the delegation of 12 Latinx youth along with local teachers, marine biologists and environmental activists. “We were able to see Cuba for ourselves and not just we read about in the newspapers or the lies the US government tells us.  We saw a people who were well educated, very healthy and eager to share their scientific knowledge with us. It was a mind opener for all of us”

Three young high school students, José Velasquez, Johanna Cervantes, and Kevin Zepeda talked about their experiences in working with the Cuban environmental youth organization, Jovenes Ambientales Cubanos, and other international guests from 43 countries at the Havana conference of 1400. “We learned about environmental issues in Cuba and many other Latin American countries especially, sharing our experiences in doing research on ocean plastic pollution,” commented Johanna.  She also talked about her own experience with the Cuban healthcare system during a visit to the local clinic for a skin rash. Kevin and Jose described what it was like to visit an agricultural region of Vinales, to work with the leadership of the National Aquarium (and a collaborative effort to produce a brochure on ocean plastics), and to learn how the Cubans developed an industry to replace auto parts after the US embargo was instituted. Kevin added that “Cuba has a plan to deal with climate change and expected changes in food supplies, tourism and health.”

A highlight of the meeting was a presentation by Abraham Vela, a recent graduate of Cuba’s international medical school of Latin America (ELAM). “I went to medical school in Cuba because I did not want to go to a school here and be trained in for-profit medicine….  Nearly 30,000 international working-class youth have been trained for free during the 6-year program…and they even get a stipend.  The only condition is that they return to their own countries and practice in their communities to develop sustainability. The US is way behind in developing a humanistic approach to education and health.”  He mentioned that 120 US medical students have graduated from ELAM without owing debts of up to $300,000 that they would here.

“It is a loss for the American people,” he added, “because of the blockade we have no access to Cuban drugs such as new ones that prevent amputations for diabetic patients or a drug that cures lung cancer.

In a special report to the meeting, oil worker and local United Steelworkers member, Darwin Velasquez, reported on his participation in a human rights fact-finding trip to Colombia sponsored by the Alliance for Global Justice.  In his first political activity of this type, they found that “Campesinos, farm workers and indigenous peoples are being displaced from their land.  They are being denied basic democratic rights, forced into Bogotá… To live marginalized in poverty on the edge of society.”  He told the youthful crowd how the government “was assassinating former guerrilla FARC (Revolutionary Armed Forces of Colombia) members who had put down their weapons and signed the peace accord.   “The governments riot squad tear gassed demonstrators protesting the attack on their pensions and lowering of the minimum-wage and one was killed.”

The meeting formed the US Hands-Off Cuba Committee to educate about the systematic attacks on Cuba spanning 60 years thru all presidential regimes, to campaign for an end to the blockade, to end the US occupation of Guantánamo and for normalizing relations.

They decided to publicize and attend the international Cuba Solidarity conference to be held in New York City in March, to support the IFCO caravan collecting aid for Cuba passing through LA, publicize the May Day brigade to Cuba and build a delegation to attend the next international environmental and Marine science conference in Cuba. To join and help the committee contact Brenda López: lbrenda2013@yahoo.com