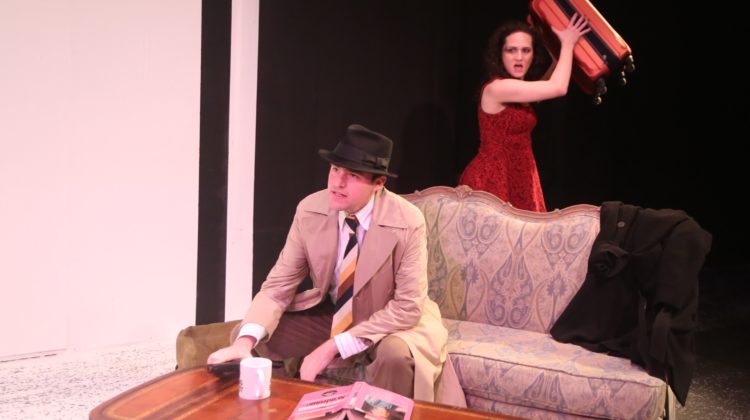 It’s a San Pedro tradition. Each January, Little Fish Theatre opens a new season with their “Pick of the Vine,” an evening of short plays, each by a different author. This year’s iteration, the 18th installment, is on the lite side, although a quiet echo of a sentimental piece from years ago offers something extra for those in the know.

The opener, Steven Hayet’s Date with Death, might be the funniest. Angela (Melissa Booey) has a bad habit: she can’t stop killing anyone she meets on eHarmony. They always ask for a second date, and it’s just so . . . awkward. Why does she keep bothering, then? Don’t try to make sense of it, just go along for the ride when a detective tracks her down with an unexpected proposition. It may not be hilarious, but there is a bit of silly charm here.

Infesting the Mob, which mines the idea that a couple of macho capos could be afraid of an eensy little spider for all the laughs it can, doesn’t really find any, no matter how hard the actors dig (and give ’em credit: they dig). It’s a bit of a head-scratcher how this one made the cut.

James McLindon’s Choices, however, is a no-brainer. A young woman (Olivia Schlueter-Corey) with a quarter-million in student debt meets with a loan officer (Susie McCarthy) whose company offers terms seemingly too good to be true. But read Footnote 7, which outlines how they profit in the end. Is it better to live a long life with crushing financial obligations or a shorter one without so much on your shoulders? Quantity or quality ― it’s a choice. With straightforward ease, McLindon gives you something to chew on.

The best thing about Irene L. Pynn’s Ophiuchus is its satirization of today’s new-age hippies (I’ve thrice been to Burning Man, so I know what I’m talking about) by depicting  a happy pair of lovers (Booey and Branda Lock) whose world is turned upside when their waiter (Ryan Knight) informs them that the entire Zodiac has been rejiggered to include a 13th sign. Bogs down a bit toward the end, but Booey and Lock’s mock earnestness bring the LOLs.

Little Fish adds an absurdist dash to the “Pick of the Vine” dish with Ian August’s Eleanor Descending a Staircase, which charts the lengths a woman (Mary-Margaret Lewis) is forced to go simply to obtain a print of Marcel Duchamp’s classic painting. There’s nothing to this one but the absurd, which is brought by the spirited charm of Brad Light as a series of clerks who won’t sell it to her.

After intermission, we get Booey and Lock again, but with a completely different dynamic in John Minigan’s Closing Doors, where a grade-school assistant principal (Booey) has to decide how to handle a teacher’s having broken protocol during an active -shooter drill. I’m not sure this has the heft Minigan wants, but Booey and Lock keep you invested. And I do like the ending’s ambiguity.

Love’s Disenlightenment, a send-up of avant-garde theatre featuring a director (Light) trying to sell one of his troupe-mates (McCarthy) on the pathos of a play about a relationship between a stick and a desk lamp, never gets off the ground.

On the other hand, while there isn’t much to Jenny Mead’s Must Love Pit Bulls, what’s here works. In the dog park, Elizabeth (Schlueter-Corey) introduces herself to Anne (Lewis). But Elizabeth’s had her eye on Anne for a while, thinking she might be the perfect person to take care of her dog. Elizabeth is “moving on,” you see, and Anne, whose beloved basset hound moved on not long ago, seems to be one of those people with a “cosmic connection” to dogs. It’s hard for me to say how well Must Love Pit Bulls works on its own merits, but in a Pick of the Vine three or four years ago there was a play featuring a pair of dogs in the park confronting the fact that one of them is moving on ― and Little Fish was smart enough to cast the same actors in this one as a bit of an Easter egg. Makes the “cosmic connection” thing resonate on a higher frequency.

Ken Levine’s Dating Through the Decades closes the night, with Booey and Knight portraying a succession of couples ― the first in the 1950s, the second in the ’60s, etc., on through today ― rattling off a string of period-specific clichés. It’s low-hanging fruit (the cleverest bit is “Did you see The Simpsons last night?” popping up three separate times), but the actors’ energy maintains the necessary momentum.

Of the five Pick of the Vines I’ve seen, 2020’s is neither best nor worst. There’s charm and feeling sprinkled throughout the evening, and the acting is almost always what’s needed to make the most of the material. Throw in good pacing and efficient scene changes, and the nine plays go down smoothly in a brisk two hours (including intermission). But the lack of any standout writing probably means that, however pleasant the night may be, by morning you probably won’t remember what you saw.

Pick of the Vine at Little Fish Theatre