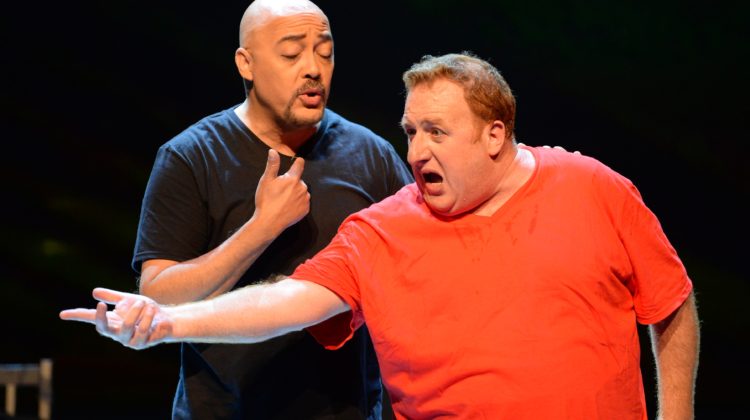 Don’t know much about Henry Purcell’s King Arthur? That’s just as well for seeing Long Beach Opera’s new, completely non-traditional take on this so-called semi-opera, because, music aside, there is literally nothing here Purcell himself would recognize.

You, on the other hand, will recognize plenty. From superhero culture to video blogging to Fifty Shades of Grey, this opus is far less a piece of Purcell’s 17th century than a work of and about today, particularly our Trump-infected politics. With an original libretto, plot, and every bit as much spoken dialog as there is singing, adaptors Andreas Mitisek and Culture Clash have bulldozed just about every nonmusical barrier that might keep a modern audience from enjoying Purcell. For all that, the piles of material they’ve pushed together don’t quite form a cohesive structure.

Arthur King (Marc Molomot) is an in-patient at the Camelot O’Neill Behavioral Resilience Mental Health Unit, where Nurse Gwen E. Veer (Jamie Chamberlin) is taking part in an experimental program of undercover play therapy to treat his complex, which includes delusions of grandeur, xenophobia, and “alternative facts disorder” ― conditions they’ve been seeing a lot more of during the past three years, for some reason. In on the treatment program are Drs. Oswald (Cedric Berry) and Lance E. Lott (Darryl Taylor).

Whatever you know of the Arthurian legend, leave it at the theater door. Even Purcell’s original had nothing to do with Camelot, focusing instead on the ancient battle between the Britons and Saxons. But this Arthur has more in common with Don Quixote than the Knights of the Round Table, obsessed as he is with exterminating the “intergalactic shapeshifters” that have come to plague us. “I am here to save this world from your alien race,” he says to Oswald, who is black.

Opening with audio of a newscast about the proposed building of a border wall and closing with Arthur’s quitting his job at Homeland Security, if you came for nuance, you are shit out of luck: Long Beach Opera’s King Arthur is pure agitprop. It may be playful as it beats you about the head with its anti-Trumpism, but even if (like me) you’d like our current president to go fuck himself, you still might come away wishing you had worn a helmet.

Conceptually, King Arthur is at its best when most playful. Early on, projections of comic-book graphics and superhero dolls provide a lite, enjoyable aesthetic. Molomot’s whininess amuses, and Chamberlin’s unbounded leap into showy vocal gymnastics from an unrelated opera two centuries removed from Purcell is delightful. Even the video blogging, which doesn’t even attempt to make any real sense, is a pleasure initially.

Alas, most of the fun ― and all of the novelty ― comes in the first half-hour, leaving us with 60 minutes of been there, done that. No new aesthetic bells and whistles, same old political commentary. Ultimately, both the ideas and the sparse staging feel half-finished.

Fortunately, the music suffers from no such defects. Chamberlin (soprano) is absolutely stellar from start to finish, while the quality of Molomot’s clear tenor comes as a surprise considering how incongruous it is with his intentionally nasal dialog. And although both Taylor (countertenor) and Berry (bass baritone) experienced some rocky moments with their first solos on opening day, the rest of their singing went off without a hitch. The entire cast was strong while vocalizing together, particularly when paired for unison runs. Expertly backed by Musica Angelica (Purcell would feel right at home here), there’s plenty of Baroque goodness on display even though the libretto is a conspicuously 21st-century product.

To be sure, this King Arthur is not for purists. Nor is it for anyone put off by political commentary that goes for low-hanging fruit. For that matter, there’s nothing high-concept at work here. On the other hand, you and your modern sensibilities may never come across a less taxing take on Baroque opera than this one. And despite a lack of conceptual follow-through, there’s definitely a bit of fun to be had in the experience. Credit Long Beach Opera for that, because on his own Henry Purcell ain’t exactly a barrel of monkeys.