Buttigieg and Biden Are Master... 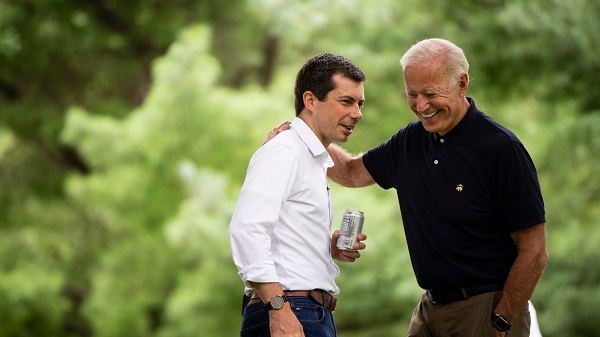 Buttigieg and Biden Are Masters of Evasion

In a recent New Yorker profile of Pete Buttigieg, one sentence stands out: “Watch Buttigieg long enough and you notice that he uses abstraction as an escape hatch.” Evasive platitudes are also routine for Joe Biden, the other major Democratic presidential candidate running in what mainstream journalists call “the center lane.”

Jim Hightower has observed that “there’s nothing in the middle of the road except yellow lines and dead armadillos.” Or, we might say, party lines and deadening politics.

Like other so-called “moderate” politicians, Buttigieg and Biden dodge key questions by plunging into foggy rhetoric. They’re incapable of giving a coherent and truthful account of power in the United States because they’re beholden to corporate-aligned donors. Those donors want to hear doubletalk that protects their interests, not clear talk that could threaten them.

“Forty billionaires and their spouses have donated to Pete Buttigieg’s presidential campaign, according to an analysis of federal election filings, making the South Bend, Indiana mayor a favorite among America’s richest people,” Forbes reported last month.

The magazine added: “More than one third of Buttigieg’s wealthy benefactors got rich in finance and investments. That group includes seven who built their fortunes from hedge funds, including Bill Ackman, Philippe Laffont and Seth Klarman.”

Mega-money manipulators are bullish on Buttigieg. “The financial sector, blamed by progressives for spawning the 2008 economic collapse, is lining up behind Pete Buttigieg’s presidential campaign,” the Associated Press explained in late December. He “has collected more campaign cash from donors and political action committees tied to the financial, insurance and real estate sector than any other White House hopeful, according to data compiled by the Center for Responsive Politics.”

AP added: “One top Wall Street law firm could pose particular challenges for Buttigieg with progressives. He’s the top recipient of cash this cycle from Sullivan & Cromwell, which has worked on some of the biggest corporate mergers in recent history, including Amazon’s acquisition of Whole Foods, AT&T’s purchase of Time Warner and Bayer’s merger with Monsanto. The firm also represented some of the largest financial institutions that received federal bailout money.”

Buttigieg is a very new darling of corporate America compared to his main centrist rival. Biden — who has a decades-long record of scarcely legal corruption while serving corporate interests in Washington — is also heavily reliant on wealthy donors and foggy abstractions.

But the basic contradiction — between serving enemies of working people and claiming to be a champion of working people — is an increasingly difficult circle to square. And a barrier to credibility with many voters.

“The mainstream Democratic storyline of victims without victimizers lacks both plausibility and passion,” said the report Autopsy: The Democratic Party in Crisis, released in October 2017. “The idea that the Democrats can somehow convince Wall Street to work on behalf of Main Street through mild chiding, rather than acting as Main Street’s champion against the wealthy, no longer resonates.”

That report (written by a task force I was part of) anticipated that a continuing upsurge in populism “will be filled by some political force or other — either the cruel and demagogic forces of the far right and its billionaire backers, or a racially diverse and morally robust progressive vision that offers people a clear alternative to the ideological rot of Trumpism.”

Most of the Democrats running for president don’t want to acknowledge the actual power wielded by economic elites. Biden is the most experienced at blowing smoke to obscure those elite forces, as if no fundamental conflicts of interest exist between billionaires and the huge numbers of people badly harmed by extreme income inequality.

That was a subtext when Biden declared in May 2018: “I love Bernie, but I’m not Bernie Sanders. I don’t think 500 billionaires are the reason why we’re in trouble. . . The folks at the top aren’t bad guys.” (At last count, 44 billionaires and their spouses have donated to Biden’s campaign.)

Abstractions and evasions of the sort practiced daily by Buttigieg and Biden amount to papering over class conflicts. In sharp contrast, Elizabeth Warren and even more so Bernie Sanders (whom I actively support) are willing to name the names of corporations and billionaires growing even wealthier in ways that undermine the lives of most Americans.

It’s understandable that corporate-backed candidates don’t want to be cornered by questions that touch on realities of political and economic power. They’d much rather take evasive action than be candid. It’s not enticing to name victimizers when they’re funding your campaign.

Norman Solomon is cofounder and national coordinator of RootsAction.org. He was a Bernie Sanders delegate from California to the 2016 Democratic National Convention and is currently a coordinator of the relaunched independent Bernie Delegates Network. Solomon is the author of a dozen books including War Made Easy: How Presidents and Pundits Keep Spinning Us to Death.