The Primary Battle to Take the...

The Primary Battle to Take the Cup from Vladovic

When Mike Lansing entered into the 7th District school board race, he became a near automatic front runner among seven candidates. A victory would give Lansing  the unusual distinction of being the current District 7 incumbent’s (Richard Vladovic) predecessor and successor. 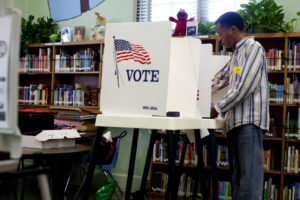 Lansing has some built in advantages in his candidacy, including a large base of financial support drawn primarily from San Pedro a support based built over two decades. It must be noted that the 7th district seat on the Los Angeles Unified school board has been occupied by candidates from San Pedro every term since 1979 with the exception of George Kiriyama and Warren Furutani from Gardena.

Random Lengths solicited responses to a questionnaire from the top five candidates running for the seat based on fundraising totals through the end of 2019. The questions covered positions on charter schools, school funding and special education. Random Lengths will feature the candidates’ responses to those questions in the Jan. 23 and Feb. 3 editions.

Patricia Castellanos is a lifelong resident of LA Unified’s 7th District. She grew up in Carson and is raising her daughter — a first grader at a local LAUSD elementary school — in San Pedro. But more important than anything else in her biography, Castelanos is a community organizer.

Castellanos served as deputy director for Los Angeles Alliance for a New Economy for the past 13 years and was the policy director and community organizer with Strategic Concepts in Organizing and Policy Education for nine years prior to that. In 2017, Los Angeles County Supervisor Sheila Kuehl hired her on as the workforce/economic development deputy.

Castellanos also led the Coalition for Clean and Safe Ports, which won a landmark agreement that reduced truck emissions at the twin ports and surrounding neighborhoods. In 2013, Mayor Eric Garcetti appointed Castellanos to the Board of Harbor Commissioners.

Though Castellanos touts herself as “the only candidate with a proven track record of building broad alliances to develop progressive policies that help clean up the environment, create good middle-class jobs, and train local hires,” she’s the only candidate with no experience in education or working with LA Unified. But then again, Blackstone Group’s venture capitalist Austin Beutner is the superintendent of LA Unified and he had no  prior experience.

Dr. Silke Bradford has more than 20 years worth of work experience in various capacities from teacher to administrator, to district level manager. Though Bradford doesn’t consider herself an activist, she has described her journey driven by a commitment to social justice through education.

As part of her narrative, Bradford frequently highlights the values and lessons her father, a career military man, drew upon from the fields his family and predecessors worked as sharecroppers in Albany, Georgia.

“My grandmother often had to stand up to the land owners, sometimes at the cost of losing a contract, to let them know that my dad would not increase his work hours in the field [so that he could] study and focus on his education,” Bradford wrote in her biography.

Bradford is intellectually sharp with the education bonafides to back it up. She earned her bachelor’s in three years and completed her doctorate in education before the age of 30. This side of her is reflected when she talks about education and policy.

She started her teaching career at the age of 21.This is also when she, as she notes in her biography, began to learn firsthand about the unjust inequities that often exist at schools serving communities of color.

Dr. Bradford cites her time as assistant principal and principal in South Los Angeles and the city of Compton as periods where she learned how to effectively support students, families and staff.

“I know how district office finance and operations can help or hurt school communities, because I have served as a senior director at school district offices and the LA county office of education,” she said.

Dr. Bradford has worked as a charter school authorizer at districts and the county office of education in Oakland, Los Angeles and Compton. She is a well-respected a​_uthority on charter law application and needed reforms as evidenced by the testimony she provided at  Senate Education committee meetings.

Dr. Bradford’s charter policy work also extends to representing the Association of California Administrators’ (ACSA) Charter Task Force in their larger legislative policy committee body. In addition, she partners in leading a reform network consisting of current and retired superintendents who want to mitigate some of the unfair damage to students and districts caused by flawed charter policy/education code.

Tanya Ortiz Franklin is a UCLA-trained lawyer who works for Partnership for Los Angeles Schools. She worked part-time with the nonprofit in educator growth and development, and coached teachers and principals to improve adult learning. In her bio, she said she also advocated alongside community partners for more equitable policies and practices at LA Unified.

Ortiz Franklin and the Partnership have pushed alongside allies for the LA Unified ban on willful defiance suspensions (Gov. Gavin Newsom signed a law going into effect in 2020 banning such suspensions); fought against the  Department of Housing and Urban Development’s (HUD) proposed federal housing rule that would prohibit “mixed status” families — households with both documented and undocumented family members — from receiving public housing assistance; and are strong proponents of Deferred Action for Childhood Arrivals and the Dream Act, a process for granting residency status to qualifying immigrants who entered the United States as minors. It would first grant conditional residency and, upon meeting further qualifications, permanent residency.

Ortiz Franklin’s mother brought her to the United States from Chihuahua, Mexico in the early 1990s. Ortiz began school as a sixth grader at President Avenue elementary. It is this experience that pointed her in the direction of advocacy in later years for educational equity.

After graduating from Columbia University in the mid-2000s, she became a sixth grade teacher at Stephen White Middle School in Carson. The great recession that began in 2008 resulted in her being laid off alongside thousands of other teachers in 2010. Franklin used the moment as an opportunity and went to UCLA’s law school and became a fellow at Partnership for LA Schools.

“At The Partnership I’ve been able to pursue my passion of changing the system by supporting many of our district’s highest-need schools with restorative justice, social-emotional learning, and the arts,” Franklin said in her bio.

In his first run for school board in 1999, Lansing turned 7th District incumbent George Kiriyama into a one-term board member as a part of former Mayor Richard Riordan’s fight to improve student achievement and United Teachers of Los Angeles’ political clout. Of the candidates supported by Riordan, Lansing probably needed the least help considering that he was able to raise close to $500,000 for the race from his significant base of support (in San Pedro).

The means by which he was able to build this support was accidental or by happenstance. In 1988, Lansing founded the volunteer non-profit agency, the San Pedro Youth Coalition ― an organization that promotes youth issues and sponsors youth development programs. A few years before he ran for school board the first time, Lansing was made the executive director of the Boys & Girls Clubs of the Los Angeles Harbor. When Riordan decided to back Lansing as part of his Coalition for Kids, Lansing as a candidate was already a complete package.

Under Lansing’s 25 years at the Boys and Girls Club, the youth services organization has opened 20 locations in the Los Angeles Harbor area communities of San Pedro, Wilmington, Lomita and Harbor City.

In his bio, Lansing touts his time as the Chairman of the Facilities committee during his first term in which he overseen the construction of over 80 new schools in Los Angeles ― a time when the district could keep up in building new classrooms for the exploding student population at that time. If he wins a third term, he and fellow board members will be tasked with dealing with declining student enrollment.