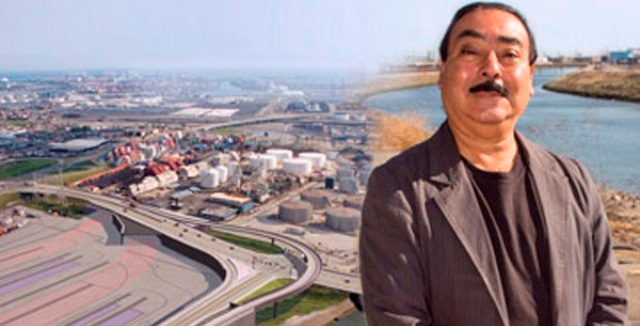 The Wilmington-based Coalition for a Safe Environment is one of two local groups in a national 13-group coalition that filed suit just before Christmas to block the Trump administration’s attempt to roll back the Chemical Disaster Rule. The rule is a set of disaster prevention measures developed by the Environmental Protection Agency under Barack Obama, from 2014 through January 2017, in the aftermath of several deadly high-profile disasters, among them a 2012 refinery fire in Richmond, Calif., which sent more than 15,000 people to seek medical attention, and a 2013 explosion in West, Texas that killed 15 and injured more than 200. Locally, the rollback of this rule by Trump’s EPA will have a serious effect on people living near the Harbor Area refineries and chemical plants.

“By killing these critical protections, millions of people living near chemical facilities in the United States are put in harm’s way,” the coalition, represented by Earthjustice, said in a statement announcing the suit.

In the original rule-making process, the EPA determined that existing protections had failed to prevent over 2,200 chemical fires, explosions, leaks and other incidents over a 10-year period. This included more than 100 per year that caused injuries. The extent of potential exposure is staggering, the statement noted:

Nearly 180 million Americans live in the worst-case scenario zones for a chemical disaster. At least one in three children go to a school near a hazardous chemical facility. About 12,500 industrial facilities nationwide use, store, or manage highly hazardous chemicals that the Chemical Disaster Rule covers.

The communities affected are disproportionately low-income and minority—meaning they’re protected by laws and regulations that EPA ignored in its rollback process.

“EPA with its rollback rule has eliminated virtually all the improvements that were made by the Obama Administration,” Earthjustice attorney Gordon Sommers told Random Lengths News. “They haven’t made a serious effoEPA’s Rollbackrt to prevent chemical disasters at all. What they’ve done is make a serious effort to get rid of protections that industry doesn’t want.”

Key protections being gutted include root causes analysis (to identify all factors leading to an accident) and third-party investigations (to ensure critical objectivity) when disasters do occur, analyses of near-misses, in which disasters are narrowly averted and making chemical hazard information public.

This is the second time they’ve sued over the rule: first to counter the delay of the original rule, and now to counter this rollback.
“This is unprecedented,” Coalition for a Safe Environment founder and president Jesse Marquez, told Random Lengths. “We’ve never done this before, because there’s never been a need for a second lawsuit.”

Others, not involved in the lawsuit, were critical as well. “The rollback of EPA rules that were written following the 2013 tragedy in West, Texas, is a setback for chemical safety,” said Dr. Kristen Kulinowski, interim head of the Chemical Safety Board, created by Congress to investigate major accidents and report to the EPA. “It takes us in the opposite direction from where the CSB would like to see the nation going,” Kulinowski stated.

“The chemical safety rule gives my community a chance to challenge the explosive hazards, like Jones Chemical, that have been grandfathered in over the years as neighborhoods build up around them,” said Cynthia Babich, founder and director of the Del Amo Action Committee. “It is a tool to allow us to impose common sense rules to sites that most often have chemical information obscured from public view using the cloak of terrorism. Without the chemical safety rule, it is just plain old business as usual.”

Oil and chemical industries fought tooth-and-nail against the original rule as it was being written, getting help from state-level Republicans led by the Oklahoma Attorney General Scott Pruitt.

“As soon as Trump came into office and Scott Pruitt was appointed to head the EPA, immediately they started trying to roll it back,” Sommers said. “There was never a serious effort to tweak it, to try to improve what was done by the prior administration.”

But this is no longer the case. Pruitt resigned under a cloud of scandal in 2018, under at least 14 separate federal investigations. But, “That bias still exists,” Sommers said. “We still have industry-affiliated folks at EPA working to get rid of these things.”

But industry may be cutting off its nose to save its face, according to Marquez. He cited a 2016 Rand Corporation cost-benefit analysis of proposed regulations. “The average cost of an incident at a refinery costs $220 million,” Marquez noted. “The 2015 incident at Exxon Mobil Corporation’s Torrance Refinery indicated a cost to California drivers of nearly $2.4 billion, which took the form of a prolonged $0.40 increase in gasoline prices.”

“Our organization’s research of the ExxonMobil explosion disclosed that an off-the-shelf $2,000 pressure gauge and a VOC (volitile organic compounds) gas leak detector could have prevented the explosion,” Marquez said. “What they could have saved was ridiculous. We have bad management making bad decisions.”

In a similar spirit, there are two major points the public should be aware of, according to Jane Williams, executive director of California Communities Against Toxics. “Our entire petrochemical infrastructure is aging. It is essentially a sort of breaking down,” Williams said. “If you look at the reports from the Chemical Safety Board, many of the chemical accidents that are occurring are from the aging of the petrochemical infrastructure, the pipes that are corroding, seals that are corroding, as opposed to accidents.”

These are “things that are relatively easy to prevent,” she noted, “So one of the things that we really want EPA to do is focus on what are these preventative measures. [The question is]Do we have a pollution prevention paradigm that we’re trying to prevent these accidents from happening? Or are we going to be in the paradigm that says ‘respond’?”

Williams’ second point was that there should be better planning in place.

“Despite what you might believe is a lot of planning on the ground, we see catastrophic near misses,” she said, citing the headline-making Philadelphia refinery fire last June. Although it burned to the ground, it could have been much worse.

“A major catastrophic release of hydrogen fluoride was avoided because one smart employee flipped a switch on the way out the door as the refinery burned,” she said. “Absent that action, we would have had one of the worst chemical disasters this country has ever seen.”

Rather than depending on individual wits in a panicked situation, there should be detailed plans that everyone knows how to follow.

“It cannot be overstated that planning and prevention needs to be the focus to prevent chemical disasters,” Williams stressed. “And, we still don’t have enough of that.”

The EPA violated a number of key legal requirements which are bound to figure prominently in future litigation. In August of 2018, the Second Circuit Court of Appeals in D.C. ruled that the EPA’s initial delay of the Chemical Disaster Rule was “arbitrary and capricious,” and struck it down. The rule was an outgrowth of the 1990 Clean Air Act Amendments “to ensure adequate protections against highly dangerous releases of chemicals,” the court wrote, and EPA’s delay “makes a mockery of the statute.”

There appears to be little difference heading into round two. In their final comments, before the Rollback Rule was adopted, the coalition members cited this decision under the heading, “EPA may not lawfully repeal the prevention measures,” where it wrote:
EPA has no authority for the proposed Rollback Rule. EPA also violates the Clean Air Act because its proposal fails to meet the statutory test for rules… which require regulations provide, to the greatest extent practicable, for the prevention and mitigation of disasters. As the D.C. Circuit held, the Act “makes clear that Congress is seeking meaningful, prompt action by EPA to promote accident prevention.”
Repealing the Barack Obama-era Chemical Disaster Rule would be equally at odds with this ruling that tossed out the delay. Furthermore, that comment continued:

It is also unlawful and unconstitutional for EPA to consider costs as a justification to repeal or weaken protections, based on the direction from Executive Orders that “place greater emphasis on reducing regulatory costs and burdens” than § 7412(r)(7) allows.

Elsewhere, those comments also noted that rule “perpetuates environmental injustice and disproportionately harm communities of color and low-income communities,” which also violates federal law. It also argued the process “has prejudiced community members’ ability to meaningfully participate pursuant to the Clean Air Act.” In the original rulemaking process, the Obama EPA considered over 161,000 public comments. In the rollback process, the Donald Trump EPA did everything possible to prevent such comments, holding only one public comment meeting, on short notice, in Washington, D.C.

Finally, the EPA also illegally reversed itself on several key findings: “Changing course without a reasoned and supported explanation —which must be more detailed, where, as here, EPA is rejecting its own prior fact-findings—is the definition of arbitrary and capricious,” meaning it’s flagrantly illegal.

Further court filings are expected in the next few months.