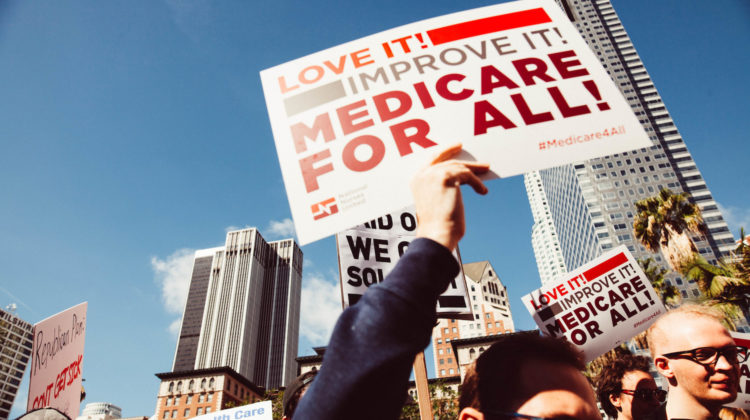 Medicare for All: All Facts, No Chaser

Health care is among the most important issues for Democratic voters as they are sizing up their candidates running for president in the 2020 election, polls show.

And, when it comes to health care, discussion about proposed “Medicare for All” plans have dominated the Democratic debates.

These sweeping legislative proposals would provide health insurance to every American. They would fundamentally restructure the health care system to address rising costs and take most commercial interests out of health care.

So what would that mean? Here are some answers to questions about the plan:

What is “Medicare for All?”

Everyone would receive a “Universal Medicare” card. There would be no separate health plans, managed by private insurers, such as now exists with Medicare Advantage plans. The new system would not affect the Veterans Affairs or Indian Health Service, but it would eliminate TRICARE, the health care program for the military.

“The country would end up with one health system,” says Donald Berwick, president emeritus of the Boston-based nonprofit Institute for Healthcare Improvement and a supporter of a Medicare for All approach.

Sen. Elizabeth Warren supported Sanders’ plan at first, but she has since revised her approach. Instead, she says she would take several years to transition to Medicare for All.

Is Medicare for All the same thing as single-payer or universal coverage?

What about a public option? Is that the same as Medicare for All?

Don’t other Democratic presidential candidates have Medicare for All plans?

Sens. Warren, Kamala Harris, D-CA, and Cory Booker, D-NJ, are co-sponsors of Sanders’s Medicare-for-All legislation, but each have different approaches, in terms of transition time and financing. All three would allow a role for private insurers, before a time when they would transition everyone to Medicare for All. Warren says she would push for Medicare for All before the end of her first term, while Harris and Booker have laid out longer transition times.

Other leading candidates, including former Vice President Joe Biden and Pete Buttigieg, propose adding a public option for health insurance. Buttigieg, the mayor of South Bend, Ind., calls his plan “Medicare for All who want it.”

Does Medicare for All means we would give up private health insurance?

Yes, but it is possible that some health services would not be covered under a federal plan, such as cosmetic surgery, which could be covered by a private health insurer, says Berwick.

What would be the benefits of Medicare for All plans?

“It would improve the generosity of health coverage,” says Charles Blahous, a senior research strategist at the Mercatus Center at George Mason University and a former economic adviser for President George W. Bush.

Medicare for All would eliminate many of the health insurance costs we pay now. That includes monthly premiums, copayments you make when you go to the doctor’s office or hospital and deductibles, or the amount you pay before insurance coverage kicks in. All Americans would have coverage for comprehensive health care services, including hospital stays; emergency room visits; doctor visits; substance use disorder treatment; dental, vision and mental health services; long-term care and reproductive health care. Depending upon income, prescription drug cost sharing would be capped at $200 annually.

Medicare for All would be more generous than the existing Medicare program. Medicare requires people to pay a monthly premium for doctor visits, a deductible for hospital stays, a premium for a separate drug coverage plan and costs for skilled nursing, such as physical therapy, after 100 days. It doesn’t pay for long-term care. In 2016, those out-of-pocket costs, for the year, averaged $5,460 for Medicare beneficiaries, according to the Kaiser Family Foundation.

How much would the Medicare for All plans cost?

Estimates range from $20.5 trillion to $39 trillion or more, over 10 years in additional federal spending.

The estimates make assumptions about which years the plan would take effect, how efficient it would be and how much costs would be cut by the federal government taking over all health care spending. Federal, state and local governments account for a little less than half of healthcare spending through Medicare, Medicaid, the Children’s Health Insurance Program, and other spending.

“The projections vary depending upon assumptions about where health care provider prices would be set, how much administrative savings you could get, how much drug costs come down and how much utilization of the health care system changes,” says Sara Collins, vice president of health care coverage and access for the Commonwealth Fund.

Would it raise taxes?

Depending on your income level, yes.

To fund the plan, Sanders proposes several potential options, including a 4 percent tax on employees, exempting the first $29,000 for a family of four and a 7.5 percent tax on employers, exempting the first $2 million in payroll. He also proposed a tax on “extreme” wealth, increasing estate taxes and increasing the marginal tax rate for those making more than $10 million.

Warren and Harris have proposed other ways of paying for it. Warren suggested a newly calculated employer tax, a tax on billionaires and eliminating preferential tax rates on capital gains and dividends. Harris has proposed higher taxes on individuals making $100,000 or more. Booker has not said how he would finance it.

Sanders says Americans are already paying out-of-pocket for services. Low- and middle-income Americans would end up with more money in their pockets because they would no longer have to pay for their health care.

Would Medicare for All lower health care costs?

The answer depends on who is analyzing the plan.

It would lower costs for people who are struggling to pay for their health care premiums and services.

In 2019, around a quarter of Americans said they had problems paying their medical bills. One-third of insured adults said it was challenging to pay for their health insurance and about a third said they didn’t take their medicine as prescribed because of the cost, says the Kaiser Family Foundation.

For people with employer-sponsored coverage in 2019, employees contributed an average $6,015 toward a premium for family coverage and individuals contributed $1,242 for their premium, according to a Kaiser Family Foundation survey. The average deductible was $1,655, the survey says.

For people who don’t have employer-sponsored insurance and bought individual plans, the average cost of a premium was $5,280 a year in 2018 (the most recent data available) and for family coverage, it was $14,016, according to ehealthinsurance.com. Deductibles averaged $4,578 for individuals and $8,803 for families in 2018, the publication says.

Medicare for All would eliminate these premiums and out-of-pocket costs. It can be “thoughtfully designed to reduce total costs for the vast majority of American families,” Berwick says. “People will get more for their money” in terms of access to more health benefits and better quality of care, he says.

Others say national spending costs will increase because more people will be insured. (In 2018, there were 27.5 million uninsured people in the U.S.) Further, the government would be expanding benefits, such as paying for long-term care and dental, vision and hearing services.

“The fact is, the more health services that are covered, the more it costs,” says Blahous.

Would people still have a choice of doctors?

Yes, because “you won’t be restricting choice, but rather just how the health system is paid for,” says Collins. There may be a higher demand for health providers, but she thinks the health care system could adapt.

Would it mean long wait times to see doctors?

Maybe. It depends on how quickly the system can adapt and how much demand there is. Under the Affordable Care Act, around 20 million newly insured Americans came into the healthcare system, but there were no reports of long waits for doctors, says Collins.

How do advocates say it would improve health care?

It would create more equality in the health care system because it would eliminate the uninsured and get everyone access to health services and the drugs they need, regardless of income, say advocates. People wouldn’t have to worry about going bankrupt to pay for an illness and the profit motive in health care would be curbed, reducing provider and drug costs, they say.

“Millions of people will no longer have to choose between healthcare and other necessities like food, heat, and shelter,” Sanders says in a statement outlining his proposal.

What problems do critics cite?

Fundamentally restructuring the federal government to take on trillions in additional spending would cause unpredictable disruptions to the health care system, opponents say. Shifting financing of all health care services through a new tax on employers, employees and high-income earners may also be a damper on the national economy and still may not be enough to pay for all the new federal spending.

“There is no realistic way to finance this,” says Blahous.

Under Sanders bill, experts in the federal government would also be making many decisions for patients, such as what experimental treatment options they are eligible to receive — a role the federal government should not be playing, opponents say. Further, hospitals and doctors may decide they no longer want to provide care when the government sets prices of services and drug companies may no longer have the funds to invest in research and development for new treatments, they say. Currently, hospitals and doctors accept Medicare rates but then shift costs to other private payers. They would not be able to do that under this plan.

What is certain is that Medicare for All “would be a substantial reorganization of the health system,” says Collins.