A Holiday Message in Support o... 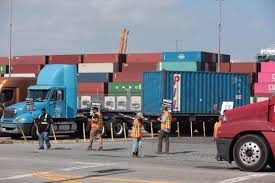 A Holiday Message in Support of Port Drivers’ Fight for Justice

When we heard port truck drivers were going on strike again this past September to protest many egregious labor abuses, we wanted to support them. We had heard heartbreaking personal stories of families struggling to survive on drivers’ insufficient pay and lack of basic health care. We were truly outraged over the crass exploitation and deprivation of rights that these drivers endure with little protection and reward. So we certainly wanted to express our concern. But instead of walking a picket line at the harbor, we found ourselves on a plane to Salt Lake City. We were headed to the North American corporate headquarters of Rio Tinto, one of the world’s largest mining companies.

Rio Tinto operates mines all around the planet, extracting copper, iron and gold, plus the world’s largest borax mine in the California town of Boron. While Rio Tinto may not be a household name, its products are — the minerals from their Boron mine are found in everything from flat screen TVs and smartphones to laundry detergent and cosmetics.

Yet, while Rio Tinto made over $40 billion in revenue last year, the dedicated truck drivers that haul the heavy containers of borax from their mine in the Mojave Desert to the ports of LA and Long Beach are not even paid minimum wage for every hour worked and the hours can be long and hazardous.

These drivers work for a company called California Cartage Express (CCX), which is a subsidiary of NFI Industries, a massive logistics corporation based in New Jersey. Rio Tinto is NFI/CCX’s only customer and has a clear responsibility towards these drivers — especially since Rio Tinto has its own standards for companies it partners with, outlined in its “Supplier Code of Conduct.” The drivers walked off the job in September to protest unfair labor practices as part of an ongoing battle to get NFI/CCX to end the wage theft that deprives these workers of income they have fairly earned – and we joined them in getting the message across to Rio Tinto.

While their coworkers set up picket lines up at the NFI/CCX truck yard in Los Angeles and at the Rio Tinto mine in Boron, two NFI/CCX drivers — Flavio Acosta and Jesus Maldonado — took their concerns straight to Rio Tinto’s headquarters in Salt Lake City.

We joined Flavio and Jesus at Rio Tinto’s sparkling corporate campus in Salt Lake City to deliver a petition with 5,000 signatures from allies around the globe. The petition urges Rio Tinto to do the right thing and stop doing business with NFI/CCX due to its violation of Rio Tinto’s Supplier Code of Conduct, which expressly demands that sub- contractors follow the law and respect the human rights of workers in the U.S. and around the world.

As we delivered the petition, Flavio and Jesus shared with Rio Tinto management their firsthand reports about the long hours they work each day and how NFI/CCX steals their wages and violates their rights. For instance, the California Labor Commissioner has found in the case of 14 drivers that NFI/CCX owes them $3.7 million for wage theft — like forcing drivers to pay the costs of owning, maintaining and repairing expensive big rigs, not paying drivers for all hours worked and failing to provide drivers with meal or rest breaks. On top of that, NFI/CCX does not provide health insurance to its drivers — an aging workforce performing one of the most dangerous jobs in the country.

At the end of our visit, Rio Tinto management took the petitions and told us they are investigating the issues but didn’t commit to anything. Today, Rio Tinto continues to do business with NFI/CCX and the drivers are still fighting for their rights, at their workplace and in the courts.

We were moved by the accounts given by Flavio and Jesus’and their bravery. We continue to Support their quest for justice. As members of Our People Our Port Coalition, which includes concerned community members, worker rights activists, immigrant rights advocates and faith leaders, we put our values and our faiths to action, not just because it is morally the right thing to do; these drivers are members of our communities, our congregations and our city and we all benefit from their hard work.

Global giants such as Rio Tinto who profit off the backs of workers and our natural resources have the responsibility not to partner with lawbreaking companies and to enforce their own codes of conduct. It is appalling that Rio Tinto continues to do business with NFI/California Cartage Express when they are well aware of the rampant and documented violations.

We are left wondering if corporate codes of conduct actually mean anything. Are they just empty words on a piece of paper that companies like Rio Tinto have no intention of enforcing?

Rio Tinto, we are asking you to enforce your own code of conduct and stop partnering with lawbreaking companies. This is about following through on your own principles and integrity as a company.

Nelson L. Castorillo is a Senior Pastor of the First United Methodist Church of Wilmington. Paul Michael Neuman is a Co-Founder of the East Area Progressive Democratic Club and Chair of the 43rd Assembly District of the Los Angeles County Democratic Party and they are members of the Our People Our Port Coalition.