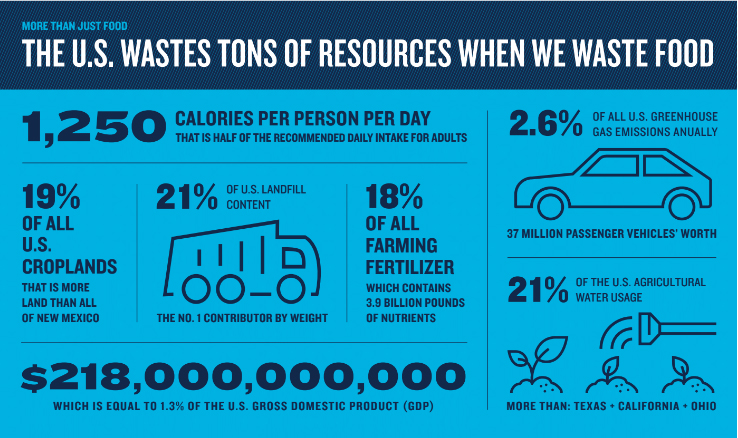 The Natural Resources Defense Council found that 40 percent of this nation’s produce —  the equivalent of $165 billion — is filling the depths of America’s landfills, even as 11.1 percent of U.S. households experience food insecurity at some time during the year.

The NRDC also noted that here in the Golden State, food insecurity is below the national average, but Californians still throw out 5.6 million tons of food every year. This accounts for 18 percent of the state’s waste. Jonathan Bloom, author of American Wasteland offered an even clearer vision of food waste in America when he noted that Americans waste enough food to fill Pasadena’s Rose Bowl every day, 365 days per year.

A  recent report by consulting firm McKinsey ranks reducing food waste as one of the top three opportunities to improve resource productivity. Key prospects for change agents include:  The U.S. government should conduct a comprehensive study for food losses in our food system and establish national goals for food waste reduction. One key action will be to standardize and clarify the meaning of date labels on food so that consumers stop throwing out items due to misinterpretation. A waste reduction organization in the United Kingdom has estimated this type of clarification could prevent about 20 percent of wasted food in households. State and local governments should lead by setting targets and implementing food waste prevention campaigns in their jurisdictions as well as their own operations.

One key opportunity for this is education alongside municipal composting programs. Businesses should start by understanding the extent and opportunity of their own waste streams and adopting best practices. For example, Stop and Shop was able to save an estimated $100 million annually after an analysis of freshness, shrink, and customer satisfaction in their perishables department. Americans can help reduce waste by learning when food goes bad, buying imperfect produce, and storing and cooking food with an eye to reducing waste.

Food Finders, a Long Beach-based organization is working to solve the problem of food waste and food insecurity. Food Finders finds and donates perishable food to more than 400 nonprofit pantries and shelters throughout Southern California in order to reduce hunger and food waste. Some of the agencies Food Finders connects with are: Beacon For Him, I Own It Today and  St. Peter and Paul’s Poverty program.

During the past three decades, Food Finders has created a strong relationship with more than 700 food-related businesses to pick up food leftovers and provide the food. This year, they are on pace to distribute 12 million pounds of food.

“We have three paid truck drivers that use our refrigerated vehicles to rescue 10 to 12 pallets of products at a time, and we also have 250 weekly food routes that are operated by 150 community volunteers using their personal vehicles to rescue one to two shopping carts full of food,” said  Lisa Hoffmaster, the organization’s fund development director. “All of that food is then immediately delivered to an agency for either a prepared meal service or a food pantry distribution on the same day.”

As of January 2018, California had an estimated 129,972 people experiencing homelessness on any given day, as reported by Continuums of Care to the U.S. Department of Housing and Urban Development. Of that total, 6,702 were family households, 10,836 were veterans, 12,396 were unaccompanied young adults (18-24), and 34,332 were individuals experiencing chronic homelessness.

In addition to distributing more than 22,000 meals worth of perishable food daily, it puts on Chefs to the Rescue, an event that challenges local chefs to make sample size serving of creative dishes using food overages, and the holiday food drive, which runs from Oct. 1 through Dec. 31. During the drive, the organization places hundreds of collection bins in local businesses, schools, clubs and libraries. People at those locations can donate traditional holiday meal items, such as yams, gravy, stuffing and cranberries. They also collect money to purchase turkeys to distribute along with completed holiday meal boxes.

The first food distribution occurs the week before Thanksgiving. Food Finders host a huge volunteer event where all of the food is sorted and boxed, then the next morning all of the holiday meal boxes and frozen turkeys are delivered to different agencies for distribution to the food insecure people that they serve. This process is continued until the end of the year.

“On average, Food Finders collects more than 100,000 pounds of food and purchase some 1,600 turkeys to serve individuals, families and seniors during the holidays,” Hoffmaster said. “This food drive is a success because of all the assistance we receive from the community.”