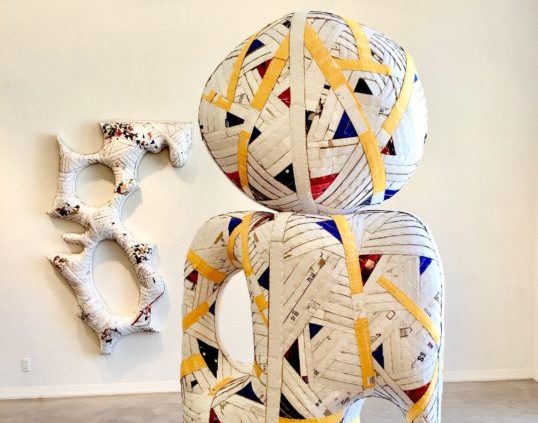 They’re organic, spherical and cylindrical, some life-sized—Ann Weber’s sculptures strike instantly familiar to the eye. Feminine and masculine shapes pose — vibrant, upright and playful — jazzy like the name suggests. They are on view at Los Angeles Harbor College, Fine Arts Gallery until Dec. 19.

Weber’s environment is the inspiration for her abstract forms, made of discarded cardboard she forages and cuts into stapled together strips. Ron Linden, curator of LAHC Fine Arts Gallery, noted they are not unlike Dutch painter Piet Mondrian, who fell in love with American jazz, particularly boogie woogie. The improvisational style and syncopated beats were close to his what Mondrian called in his own work, the “deconstruction of natural appearance; and construction through continuous opposition of pure means—dynamic rhythm.” Mondrian’s painting, Broadway Boogie Woogie is the inspiration for this exhibition.

Many of Weber’s pieces are metaphors for the balancing acts of life and her do-it-yourself that past has served her well. In fact, Weber had a eureka moment, allowing her to make the best use of her tools. After experimenting with plaster and different materials for sculpting, she thought why not use the cardboard that the materials came in. So she bought a $20 staple gun and started to build forms, weaving and coiling card paper strips together, rounding their edges to make spherical forms out of a flat plane. Starting with spheres and cylinders she expanded to drawing a shape, then another and “slotted” them together. Peedrow Boogie Woogie sculptures emerge boldly in black and white or pop with a solo color. In others, earth tones saturate harmonious forms in bronze, gold, orange and green.

In her Nov. 13  talk at the gallery, Weber discussed her process and her life as an artist over the past 30 years. She began as a potter. After graduating from Purdue University, Weber got married and she and her husband drove around the country together, ending up in Ithaca, New York, where they became DIY artists. They established a pottery studio with a showroom and amenities. They also made their own kiln from directions in a book using the bricks from an  old nearby school. Eventually she began her own pottery business in Greenwich Village.

Four years later and no longer married, Weber was encouraged to come west where she was told artists pushed the boundaries of ceramic art. She attended California College of the Arts, where a teacher told her to look at the work of Kandinsky, a pioneer in non-figurative painting.  Her work shifted from functional to abstract. She found herself drawn to spheres and cylinders, describing them as “the most basic forms with the most power. The male and female forms from nature, from which all things come.”

It’s been a balancing act for her, revealed in many of her pieces, particularly the playful, life-sized Peedrow Boogie Woogie. Bright, primary colors circle and weave through a canvas of milk-white on the feminine squarish form. Its rounded edges and cutouts serve as catalysts for hands to grasp it and play with its prominent crowning orb. This piece is informed by Mondrian’s  Broadway Boogie Woogie. Weber, on her Instagram page, said after Linden called her pieces jazzy, “…rushed back to the studio to take another look at Mondrian and — presto!— out comes this sculpture.”

Finding inspiration from graffiti in Los Angeles, Weber said it looks different here from other cities with its gothic script and the “pointy loopy” graphics. She has translated these impressions in energetic colors that exclamate her life force shapes resembling gourds, musical zig zags, human forms and even the galaxy.

“If you get out of LA and work part time, you can learn how to support yourself while doing your art,” said Weber, who noted that she never supported herself from her art. She always had other jobs, working at art centers, renting out her extra room, living in places no one wants and getting help to fix things.

Weber has constructed the freedom for herself to create beautiful works on a monumental scale with next to no material cost, in true DIY form.

Time: 11 a.m. to 4 p.m. Monday through Thursday and by appointment,