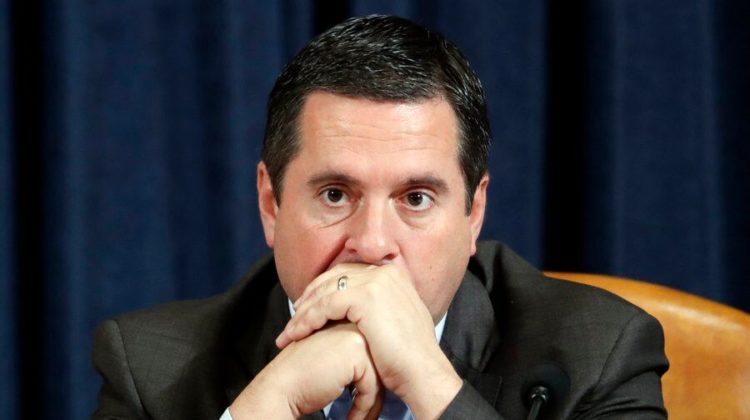 Forget Trump — Impeach the Party that Enables Him

Donald Trump almost certainly won’t be impeached and removed from office, despite overwhelming evidence he’s guilty of bribery. But that doesn’t mean he can’t be held accountable — along with the increasingly cult-like party that’s protecting him. That’s how activists like Peter Warren, a founding member of Indivisible San Pedro, see things.

The slim chances of ousting Trump from office were underscored recently at the Washington Post’s Monkey Cage blog:

Of 223 presidents elected in 53 democracies between 1946 and 2007, 31 faced formal impeachment proceedings; 11 of those presidents were removed.

…. Of those 223 elected presidents, only one was removed with the support of a majority of the president’s own party.

It wouldn’t quite take a majority of GOP senators to remove Trump from office, but it would be close. So the odds of it happening are virtually nil, regardless of what Trump has done.

Meanwhile, back in reality, evidence against Trump is overwhelming. More than two months after the inquiry started, there are no good facts on Trump’s side, as one cover story, excuse, or distraction after another gets demolished by new information. Jennifer Mercieca, author of the forthcoming book, Demagogue for President: The Rhetorical Genius of Donald Trump, described the proceedings as a battle between Democrats “relying on a law-and-order frame that tells Americans that the impeachment inquiry is legitimate and legally justified,” and Republicans “relying on a conspiracy frame that tells Americans that the impeachment inquiry is illegitimate and part of a plot to destroy America.”

While Mercieca focused on the rhetoric, we can see both parties operating consistently within those two frames: Democrats have proceeded with a step-by-step investigation and presentation of evidence, while Republicans have spun a series of conspiratorial speculations and accusations undeterred by whether they bear any relationship to established facts.

At times, they’ve completely given up asking witnesses any questions, and they’ve repeatedly railed at Democrats for not bringing in witnesses to pursue their conspiracy theories, in order to distract from what Trump did. They want to hear from the whistleblower, whose initial concerns have been repeatedly confirmed by the witnesses who have appeared. They don’t want to hear from Donald Trump or the parade of people close to him whom he’s forbidden to honor subpoenas.  But they do want to complain about the relative lack of eyewitness testimony. Their interest in what actually happened is virtually nil.

The first week of open hearings (reported in RLn on Nov. 21) was met by a new dominant complaint: there were no first-hand eyewitnesses; it was all hearsay, the Republicans claimed. But the second week brought a number of first-hand witnesses to testify, leaving Republicans dazed and confused.

The witnesses included Trump’s hand-picked ambassador to the European Union, Gordon Sondland, who had initially parroted Trump’s claim that there was “no quid pro quo.” But, by the time Sondland testified publicly, he’d become so hemmed in by the testimony of other witnesses, that he recanted.  “Was there a ‘quid pro quo?’” Sondland asked himself in his opening remarks. “The answer is yes.  We followed the president’s orders.”

“Everyone was in the loop,” Sondland said. “It was no secret.”

The ambassador went on to admit  he had directly communicated the “quid pro quo” to Ukraine’s President Zelensky.  While Trump “talks in code,” as his long-time lawyer Michael Cohen put it, the code  wasn’t that hard to break, even if some took awhile to catch on. Calls to investigate “Burisma,” the energy company on whose board Joe Biden’s son served, was code for investigating “Biden”—the father as well as the son. Likewise, although Trump never explicitly called for a quid pro quo, his meaning was clear. “It was abundantly clear to everyone that there was a link” between military aid and investigations, Sondland said.

The GOP reacted in confusion to getting what they had claimed to have wanted the week before. Confronted with eyewitness testimony they had no coherent response, other than to baselessly accuse witnesses of lying under oath and simply repeat previous complaints, as Republican ranking member Devin Nunes did.

“The witnesses deemed suitable for television by the Democrats were put through a closed-door audition process in a cult-like atmosphere in the basement of the Capitol, where the Democrats conducted secret depositions, released a flood of misleading and one-sided leaks, and later selectively released transcripts in a highly staged manner,” Nunes fumed, spinning out a “nefarious intentions” narrative.

But if Democrats had created such a false and misleading picture, Republicans should have had a field day exposing them, with the witnesses right in front of them. Instead, clinging to conspiracism blew up in their faces. While Nunes and other Republicans continued to echo accusations of Ukranian skullduggery, former Trump appointee Fiona Hill, a national security expert on Europe and Russia, blasted them for promoting a “fictional narrative,” aiding Russia in its attack on America.

“Even as they were accusing Republicans of colluding with Russians, the Democrats themselves were colluding with Russians by funding the Steele dossier, which was based on Russian and Ukrainian sources,” Nunes said in his opening remarks. “Meanwhile, they turn a blind eye to Ukrainians meddling in our elections because the Democrats were cooperating with that operation.”

But Hill would have none of it.

“Based on questions and statements I’ve heard, some of you on this committee appear to believe that Russia and its security services did not conduct a campaign against our country — and that perhaps, somehow, for some reason, Ukraine did,” Hill said. “This is a fictional narrative that has been perpetrated and propagated by the Russian security services themselves.”

Indeed, Russia has been engaged in widely-documented hybrid warfare—combining military, paramilitary, espionage, cyber- and info-warfare—against virtually all European democracies, as well as America, in an effort to discredit liberal democracy as a political system, and empower its own criminal oligarchy, which is tightly tied to Vladimir Putin. Creating the conditions in which people lose faith in facts is a key part of this strategy — a strategy that Trump himself has long embraced—that’s now being echoed by others throughout the Republican Party. In fact, it’s become the central strategy in fighting against Trump’s impeachment.

The constitutional purpose of impeachment is, in part, to prevent just such a turn away from democratic accountability and toward authoritarian rule. Those are the stakes at the center of the impeachment fight—not the removal of Trump himself, but reversing the authoritarian direction he has taken the country. If Trump’s grip on the GOP is too tight to be broken by facts, the GOP’s power over America is not—as reflected in the 2018 midterm elections.

And 2020 can be more of the same. “It’s a turnout election not a persuasion election,” said Indivisible’s Peter Warren.

This isn’t just idle, uninformed speculation. Warren recently spent two hours calling Nebraska voters, seeking to reach people who would call Sen. Ben Sasse, and ask him to keep an open mind. Warren got fairly good at responding to the Trump talking points he encountered, but he realized, “The reason I am calling is not to persuade them. The Trump supporters I have spoken with are unpersuadable.” So turnout is the key.

“We had to target the 2018 election, win the House and the House would begin to shine a light on it [Trump’s lawlessness]. So that has happened and it’s leading to an impeachment, and it may lead to more than that. Because winning the House was our insurance policy,” Warren said. “Now our insurance policy begins this time with impeaching Trump, which means everybody in Congress (House and Senate) has to go on record and vote ‘yes’ on Trump or ‘no’ on Trump. And that’s the magic ingredient for the election,” he said. “Everybody who votes will know where the people they’re voting for stand.”

And evidence of Trump’s guilt will only become more overwhelming over time. Those who stand with him will stand accused of covering up, excusing, endorsing or enabling all of his lawless acts, the full extent of which no one yet knows.

As compelling as the House Intelligence Committee hearings were, they were hardly the only source of new damning information in the case against Trump. Closed door testimony by Mark Sandy, a career employee at the Office of Management and Budget, revealed that two other OMB career staffers resigned their posts rather than go along with Trump’s blocking of aid to Ukraine, because it violated the law—the Impoundment Control Act of 1974, which  we should note — was passed in the wake of Watergate.

That revelation alone opens up a whole new line of investigation, and underscores that Trump’s refusal to allow testimony or turn over documents to Congress really is just a criminal coverup effort, an obstruction of Congress, and grounds for another article of impeachment.

In addition, as a result of a lawsuit, a freedom of information act [FOIA] request by American Oversight produced about 100 pages of State Department documents, including emails that confirm multiple contacts between Secretary of State Mike Pompeo and Trump lawyer Rudy Giuliani — further expanding the list of people implicated in the scheme. At least one contact was facilitated by President Trump’s assistant,  Madeleine Westerhout.

“We can see why Mike Pompeo has refused to release this information to Congress,” American Oversight Executive Director Austin Evers said in a statement. “It reveals a clear paper trail from Rudy Giuliani to the Oval Office to Secretary Pompeo to facilitate Giuliani’s smear campaign against a U.S. ambassador.”

Evers said it was only the beginning, as further Ukraine investigation lawsuits were proceeding. “The public should expect more disclosures, over the administration’s strong objection, for the foreseeable future.”

Congressional Democrats realize they can’t wait for everything to come to light before moving forward with impeachment. By the time those articles are drafted, voted on, and brought before the Senate, who knows how much more damning evidence those outstanding FOIA documents will reveal?  Who knows what other unexpected sources of evidence may appear?

First, if there are any documents absolving Trump of wrongdoing, they would have been released long ago.

Second, long after the Senate trial is over, evidence of Trump’s criminal wrongdoing will continue coming out, all the way up to the 2020 election, when the voters will have their final say.

Third—as with Iran/Contra—there’s even more evidence that won’t come out before the 2020 election. Just how much of it we will ever see will surely depend on whether voters put an end to Trump’s lawlessness on that day.