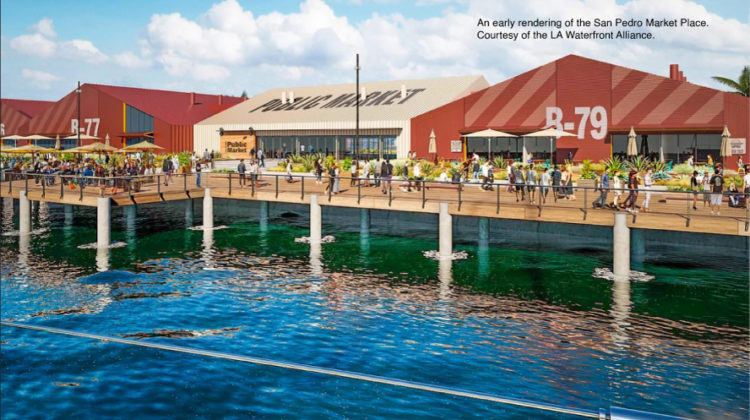 On Nov. 21, the Los Angeles Board of Harbor Commissioners approved several amendments to contracts associated with the San Pedro Public Market, a planned commercial waterfront development expected to begin construction in 2020.

Two years after granting the Los Angeles Waterfront Alliance a 50-year lease on the former Ports O’ Call Village, the commission  further lengthened the lease to 66 years. The first phase is expected to be completed in September 2021.

The commission also finalized several other agreements with the San Pedro Public Market’s developers, including approval of a supporting resolution that gave Osprey Investors, LLC a maximum of 80 percent ownership interest in the Public Market’s lease terms and officially expanded the Waterfront Alliance from two members to three. When Osprey put $30 million in equity financing into the $150 million project earlier this year, the two original developers —The Ratkovich Co. and Jerico Development — made room at the drafting table where the San Pedro Public Market is going to be born.

For many projects, increasingly favorable conditions like those the Harbor commissioners keep creating for the Public Market might heat up momentum, perhaps generate some action, at least a little news. But the developers have remained mum on potential anchor tenants aside from the two — San Pedro Fish Market and Harbor Breezes at the Public Market — announced at the outset. Likewise, there’s no indication on whether there will be some real investment in transportation infrastructure that won’t keep San Pedrans trapped in a cul de sac once this gentrifying-machine on the waterfront is complete.

When the commissioners shared their microphones during the public comment period, Ratkovich Co. founder Wayne Ratkovich spoke on the importance of extending the lease terms from 50 to 66 years. He explained an extension would stimulate continued investment in the San Pedro Public Market, thus preventing it from suffering a similar fate as Ports O’ Call Village.

Maybe so, but Ratkovich’s words might have been more convincing if they’d had to compete with, say, the racket of a construction site? Ports O’ Call Village came down in 2013. The Ports O’Call restaurant was demolished in 2018. Nothing has been put in its place since. The stillness on the waterfront makes it impossible not to hear the community grumble about the lack of progress on the San Pedro Public Market.

But during Mike Galvin’s turn at the podium, the port’s director of waterfront and commercial real estate characterized the dissatisfaction as the sound of misperception. He contended there has been a great deal of progress, even if invisible to the general public not privy to the day-to-day work that’s occurring.

However, the progress Galvin cited were the preparations to the site that were necessary for the port to hand it off to the developers, which included such things as the demolition of old buildings and soil remediation. Community concerns about remediation, and speculations they were causing delays or work-around planning were mistaken,  Galvin acknowledged some delays in the project — eight months of them in total — but expressed optimism going forward.

Ultimately, the commission did its part, voting unanimously, 5-0, for the changes.

The commission also awarded a $33 million contract to Griffith Co. to construct a 1.9-acre, 30-foot-wide public promenade, with a four-acre town square and restroom facility as part of the San Pedro Public Market.

In the summer, a bidding process for the town square took place, but bidding companies were either disqualified on technicalities or over budget, which delayed the start of construction until March 2020. Construction was initially set to begin in September 2019.

As for the investors partnering with the Los Angeles Waterfront Alliance, Osprey Investors LLC is an asset management company based in Spokane, Wash. It’s a privately held family-operated company led by patriarch, Daniel Reiner.