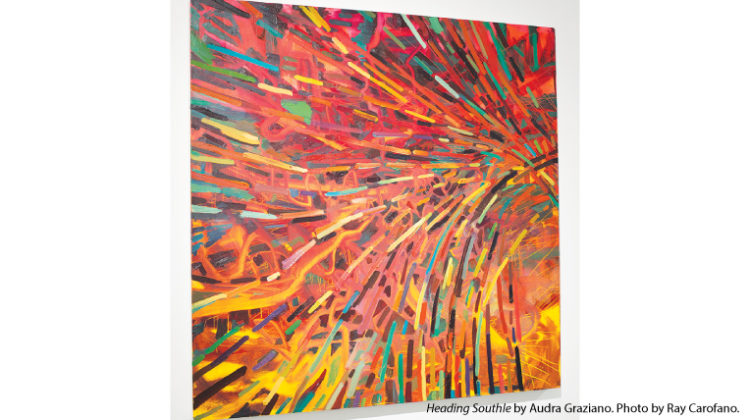 The idea of a notion is the preconceived assumption about a subject, something you thought you knew, but maybe not. In Local Notions, the exhibition of San Pedro artists at the Angels Gate Cultural Center,notions of community art are shattered.Since the mid-20th century, when Jay Mueser set up his studio in the heart of downtown, San Pedro has nurtured local arts. As time progressed the town began to attract a wide variety of professional and amateur artists to the cloistered peninsula where they could count on available studio space and a sense of isolation where creativity could be cultivated.

Four years ago, Amy Eriksen became director of Angels Gate Cultural Center, located on the site of the World War II-era 1 Fort MacArthur. When the U.S. Army relocated the old fort across the road, they discarded a breathtaking location high on a hill above the Pacific Ocean overlooking Catalina Island. A group of artists recognized an incredible opportunity. The Cultural Center emerged in the 1970s from a group that created an artist’s studio and exhibition space within the 1940-era Army barracks in Ft. MacArthur’s Upper Reservation.

Eriksen’s vision was to attract local talent to an exhibition that would reflect the range of artistry within the boundaries of the community. This show represents not just the artists working in Angels Gate studios, but a collection of artists throughout the entire art colony that exists here.

“We are here for the community,” said Eriksen. “Community art can look like this. We don’t have to go to other places to see contemporary art. We were lucky enough to have a juror who could see the vision for a 3000-square-foot space.”

110 submissions were received and 54 works were chosen.

The works exhibited in this vast show cover efforts by the best of San Pedro artists who submitted 110 works, of which 54 were chosen. The roster includes such as Eugene Daub, Ann Webber and Ron Linden. Daub, a contemporary figure sculptor, is known across the country for creating the Rosa Parks statue that sits in the U.S. Capitol building. Award-winning Michael Davis is known for his public art design, among which is the L.A. Metro Red Line Vermont/Sunset station, recognized as one of the eight most beautiful subway stations in America.

As you walk through the galleries at Angels Gate you will be introduced to artwork by familiar names but you will also see work by younger artists who you most likely have never heard of. The task of choosing the work to be included was taken on by Kristina Newhouse,  a San Pedro resident, who is the chief curator of the Kleefeld Contemporary at California State University at Long Beach.

“Jurying a community exhibition is quite a different process than curating an exhibition,” said Newhouse. “As a curator, normally I am responding to a specific artist or group of artists, delving into what philosophical, historic, formal or conceptual ideas come to the fore, and examining that in order to make decisions about the makeup of an exhibition and to ascertain my curatorial premise.

“I worked closely with Sara Pilchman at Angels Gate,” Newhouse said. “And it took the better part of the day to organize the artworks so that they would ‘speak with’ one another to create meaningful conversations for visitors to the gallery.”

Newhouse said that because of the open nature of the exhibition, the conversations had to be fairly broad and were mostly formal (style, color palette, level of expressiveness) or narrative. “There were many affinities that revealed themselves during the install—colors or patterns, which brought about satisfying connections between objects,” Newhouse said.

“It is the most fun to create these juxtapositions, which often come as a surprise to the artists who make the work. In this respect, it hopefully helps them to open up their practice, to consider showing with other artists with whom the connections or affinities are not necessarily self-evident on the surface of things.”

Among the younger artists is Audra Graziano, an MFA graduate of California State University Long Beach in 2014. Graziano is an abstract artist. Her large canvas, titled Heading Southie, covered in wild brightly colored sharp diagonal lines delves into the layering of light and color, while also serving as a metaphor for the occasional uncontrolled free thoughts we experience.

She has exhibited her work in group, solo and two-person exhibitions in various international locations, including New York City, Los Angeles, and Berlin. She is a professor of drawing and painting at Cerritos College. She was the recipient of the Windes and McClaughry Corporate Gallery Award, the Elizabeth Vyse Scholarship, and graduated with the College of the Arts Distinguished Achievement in Creative Activity Award in 2014.

Another Cal State MFA graduate is Gloria Sanchez, founder of the FA4 artist’s collective. FA4 Collective is a group of artists who follow their creative calling as individuals and work together to establish a network of support, education, and personal growth. Sanchez submitted a multimedia piece called Home Grown 3 utilizing found objects, sometimes from local swap meets, to create a braided multi-dimensional wall hanging. The piece in this show incorporated fake hair and plastic flowers to elicit a sense of memory or nostalgia.

“My work is a representation of the Harbor area community I grew up in,” said Sanchez. “I get inspiration from the philosophy of rasquache which is from Mexican art. It literally translates to the lower class.”

Rasquache art uses the most basic, simplest, quickest, and crudest means necessary to create the desired expression, in essence, creating the most from the least.

Sanchez states that she strives to maintain softness and beauty in her presence, despite growing up in harsh circumstances. She points to a verse by Tupac Shakur: “A rose that grew from the concrete.” She works to transcend the circumstances of her early environment.

Angels Gate is a nonprofit with a mission to to provide space for artists to work and to engage the community through arts education, exhibitions of contemporary art, and cultural events. Many of the 54 works in the show are available for purchase, with proceeds going towards the center.

Local Notions runs through Dec. 14 and will be open during the popular Open Studios Day on Dec. 7.