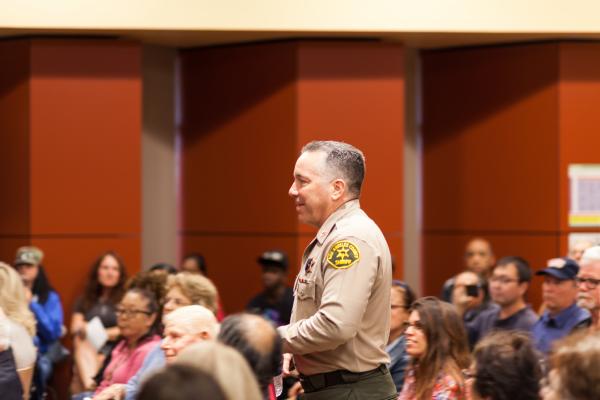 By Albert Robles, Mayor for the City of Carson

One year ago, Alex Villanueva was elected to become the 33rd Sheriff of Los Angeles County. He was a relative unknown. But on November 6, 2018, he pulled off the biggest upset in the last 100 years of Los Angeles County’s history by defeating an incumbent Sheriff. Like all the major news outlets and every elected official in this county (with the exception of three), I too had endorsed the incumbent.

For your consideration, here are some of his first-year accomplishments:

The above facts, coupled with Sheriff Villanueva delivering on his top priority – PUBLIC SAFETY – everyone should accordingly conclude that he indeed had a good first-year, because LA County crime statistics show a 7% drop, making this year the safest in a generation. This reduction in crime includes Carson, where data shows an even greater drop in crime that makes Carson among the safest cities in the county.

Villanueva’s first-year, however, has not been perfect (but whose is?). And while criticism for errors is fine, what the County Board of Supervisors has done to try to undermine Sheriff Villanueva is unfair and unsafe.

For the Supervisors to blame Sheriff Villanueva for matters that pre-date him such as the crisis at the Men’s L.A. County Central Jail and the pre-existing Sheriff’s Department budget overruns is simply put nothing but an attack job.

The crisis at the Men’s County Central Jail has existed for decades and the fault is squarely that of the Board of Supervisors as they have repeatedly failed to address the problem.  The Supervisors prefer the politically easier route of kicking the can down the road by creating commissions, task forces or blue-ribbon panels full of their political friends and allies.

The fact of the matter is this crisis is 100 percent the doing of the L.A. County Board of Supervisors as they have the ultimate responsibility for the L.A. County Jail System.  And the Supervisors have repeatedly failed to address this issue and instead chosen to postpone, delay and study it to death – sadly to the literal death of some inmates.

It is clear to even the most casual observer that the Supervisors care more about “pretending” to do something, rather than actually doing something.

As the “pretending” seems to be catching-up, their “Plan B” is to blame all the jail problems on the brand new Sheriff whom they did not support for election in the first place.

This is one of the ultimate duplicitous claims ever made by the County Board, to try to lay the blame for the shortcomings at the Men’s Central Jail on the new Sheriff – who again has only been in office for one full year.

Moreover, a couple of months ago the Supervisors, after spending millions and millions of public dollars to study, re-study, design, re-design, plan and yes re-plan for the construction of a replacement facility for the Men’s Central Jail that would finally properly address the mentally ill inmate population, has instead inexplicably yet again chosen to postpone and delay.

Even though this replacement plan for the troubled Central Jail had zero input from our new Sheriff, to his credit our new Sheriff recommended proceeding with the destruction and replacement of the Men’s Central Jail; thus, joining the many experts both hired by the Board of Supervisors as well as independent experts.

Nevertheless, the Supervisors ignored this overwhelming expert advice and decided to leave the Men’s L.A. County Central Jail as is – unaddressed.

What is worse than a game of three-card monte, the L.A. County Board of Supervisors tried to shift the blame for this latest delay to the new Sheriff.

While they may have done this to try to embarrass the new Sheriff, what they actually did was embarrass themselves. Our Sheriff once again showed strong leadership in speaking the truth to the Supervisors, and I applaud him for standing up to the so-called “Five Kings” and showing us that “the King (and Queens) have no clothes.”

The situation at the Men’s Central Jail is only one example of the LA County Board of Supervisors being more motivated by politics than the facts in dealing with the new Sheriff.

A few weeks ago, the Supervisors tried to control our Sheriff by freezing the Sheriff’s Department budget.  The pretext for this despicable action reaches a new height of political hypocrisy as the Supervisors actually attempted to justify their action by faulting Sheriff Villanueva for not cutting services as deputies worked overtime to keep us safe.

This argument strains all credulity because as reported by all major news outlets, this budget deficit is not the new Sherriff’s doing and existed before he took the helm one-year ago.

Besides, as everyone knows, the number one factor of the budget overrun is attributed to the overtime pay to deputies due to the severe understaffing that Sheriff Villanueva inherited.  So freezing the Sheriff’s Department budget makes as much sense as the LA County Board of Supervisors “cutting off their nose to spite their face,” except it is the residents and businesses that will suffer from the “cutting.”

The LA County Board of Supervisors must think that LA County residents don’t care about public safety because like them we also have our own publicly paid for individual Sheriff deputy chaperon and fly in-and-out of events in helicopters at public expense just like them.

In addition to the above factors, there are many more positive reasons than not to congratulate Sheriff Villanueva and begin to work with him: For example, he has appointed more women, minorities and members of the LGBTQ community to the highest ranks in the sheriff’s department than ever before; there is less animus between residents and the sheriff’s department; he has had countless events with youth that reduces crime before it even begins.

The fact is he is our Sheriff now, and I encourage the Board of Supervisors to join me and the millions of LA County residents who are safer, and congratulate Sheriff Alex Villanueva on his one-year anniversary.  Thank you Sheriff Alex Villanueva for keeping us safe, and thank you for your 33-years of service to the Los Angeles County Sheriffs’ Department.