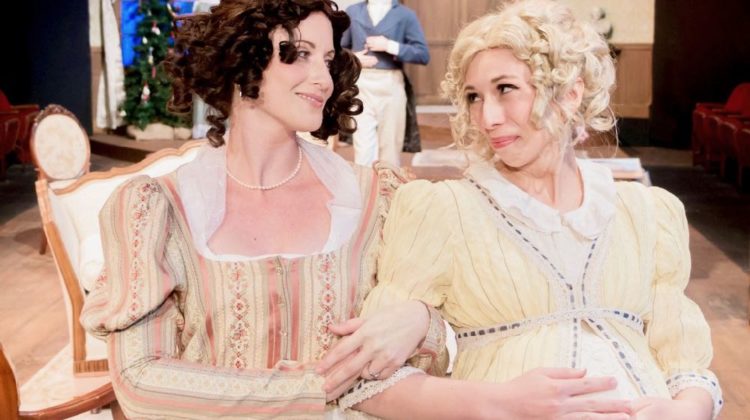 “Miss Bennet: Christmas at Pemberley” a Fine Sequel to “Pride and Prejudice”

Exactly one year ago, Long Beach Playhouse was staging a superfine adaptation of Pride and Prejudice. Now comes Miss Bennet: Christmas at Pemberley, which catches up with four of the five Bennet girls two years after the close of Jane Austen’s classic. Talk about timing!

Of course, when we’re talking about good theatre, timing isn’t everything. But good timing is the least of the many reasons to see this show.

It’s December 1815, and we find Lizzy (Nori T. Schmidt) at Pemberley very happily married to Mr. Darcy (Micah Lee). The pair await the arrival of Bennet clan ― including Mr. Bingley (Timothy Voytek), still in the midst of connubial bliss to a now very pregnant Jane (Briana Christine), but minus Kitty, who can’t get away from London (for reasons that don’t concern us in the play) ― plus Arthur (Michael Kaye), a recent Oxford grad and newly minted lord of Rosings now that Lady Catherine has kicked the bucket.

But this is primarily Mary’s (Gabi Jones) story. “We do not receive many visitors now that my charming sisters are no longer at home,” the bookish, oft-overlooked middle sister writes to Lizzy in the play’s opening scene. “[…] And I? I read. Of things beyond myself. And I wonder: Can one live a large life in mind alone?”

Because there’s no doubt that everything will work out for the best ― it’s romantic comedy and a Christmas play, for fuck’s sake ― the artistic success or failure is all in the journey to the (pre)destination. And getting there is good fun from beginning to end.

For a start, playwrights Lauren Gunderson & Margo Melcon have created a surprisingly legitimate sequel to Pride and Prejudice. I say “surprisingly” because to some extent Miss Bennet: Christmas at Pemberley is fan fiction; and while fan fiction might be enjoyable for some of the hardcore devotees of [fill in your favorite franchise here (Star Trek, Star Wars, etc.)] who like dressing up as their favorite fictional characters at Comic-Con, the more aesthetically-minded sort look down their nose at such stuff. Austen, after all, is no schlub, so getting weak in the knees over Darcy hardly qualifies you to add to the canon.

Thankfully, Gunderson & Melcon are no mere fangirls: they’re legitimate writers, and the story they tell scores points on its own merits rather than simply riding on Austen’s coattails. The words the duo puts in mouths of Austen’s characters that might have come from the novelist herself. “[…] I grew up with the kindest, cleverest, and most beautiful elder sisters in the country; and with the loudest, silliest, prettiest younger sisters in the country,” says Mary. “This left few fair adjectives for me. I find I still suffer from a lack of definition.” With lines like that, I doubt the author is spinning in her grave over the dialog.

Naturally, Gunderson & Melcon do not shy away from their source material. Their focus on Mary’s plight is in perfect keeping with Austen’s proto-feminism. And the better you know Pride and Prejudice, the more you’ll be in on the several clever callbacks to the novel. But perhaps my favorite moment comes when Arthur, well smitten by Mary but just as inept at matters of the heart, asks Bingley and Darcy when they knew they were in love. Bingley professes to love at first sight. And you, Mr. Darcy? Well….

The Playhouse cast is perfect. Gabi Jones imbues Mary with all the intelligence and acerbic diffidence the role requires, and Michael Kaye is her maladroit match. Nora T. Schmidt is a natural Lizzy, and Micha Lee (Bingley in Pride and Prejudice last season) quietly steals scenes as Darcy, benefitting from getting to deliver most of the play’s wittiest laconicism.

For the most part director Phyllis B. Gitlin maximizes the play’s potential, although a bit too much of the action is blocked so that two-thirds of the audience is looking at the actors’ backs. There’s also a minor yet unforgivable gaffe concerning how Mary discovers a letter tucked away in a book. No-one on Earth, let alone a bibliophile like Mary in a time when you couldn’t just order a new one on Amazon, picks up a book by its front cover. Otherwise, though, Gitlin’s got her cast doing all the right things.

Long Beach Playhouse Mainstage productions usually look good, and this one is no exception. With a little suspension of disbelief, Pemberley ― the one room we get to see, anyway ― is properly grand. Robert Richardson’s lighting is simple but luminous; the central role of Allison Mamann’s sound design is perfectly played; and Christina Bayer’s costumery is just about as good as what we saw when the Playhouse transported us back to the Regency Era last season.

I know it’s not Thanksgiving yet, but Miss Bennet: Christmas at Pemberley is a fine way to start your Yuletide season. So brush up on Pride and Prejudice, then enjoy a holiday reunion with a few fictional characters that feel like family.