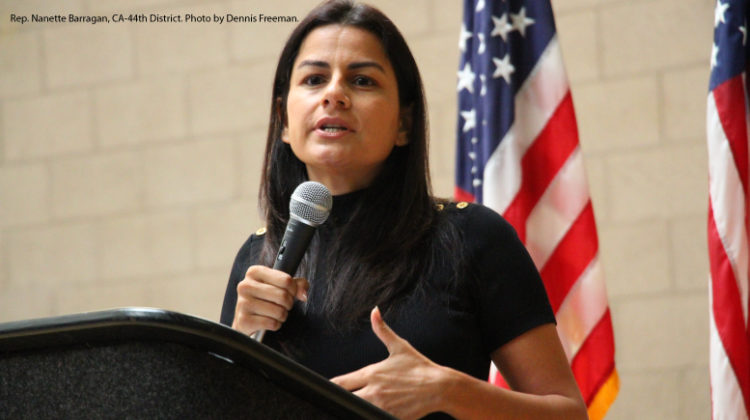 Rep. Nannette Diaz Barragán brought her voice to the nation’s healthcare woes and impeachment talk of President Donald Trump in Carson on Nov. 2. Barragán, who represents cities and communities from Carson to Wilmington and San Pedro in her 44th District, made her appearance at Stevenson Park as part of a community town hall event at the park’s gymnasium.

“The debt has exploded under this administration,” Barragán said. “When President [Barack] Obama handed it off, this economy was in great shape.”

Barragán noted that the debt exploded after Trump signed the so-called Tax Cuts and Jobs Act which also transformed the tax code.

“I don’t know about you, but I had to pay $5,000 this year in taxes, the first time that I’ve ever had to pay more money,” Barragán said. “That tax benefit went to the top 1 percent of corporations… If you’re going to [explode the debt, then] provide all of us with healthcare… provide us all with education.”

“This bill will allow more eligible institutions to conduct groundbreaking research to expand access to healthcare for underserved communities like ours in California’s 44th District,” Barragán said.

Healthcare was one of the driving forces behind the town hall, but from a national and global perspective, the impeachment discussion around No. 45 has exploded on Capitol Hill.  Barragán informed her constituents that what is happening now in Washington, D.C. is not a full-fledged impeachment but a formal process that might wind up that way. The House of Representatives took up a vote to formalize impeachment proceedings against Trump in a 232-196 vote in October.

“It is not a vote to say, ‘Do you want to impeach the President?’” Barragán said.  “This vote was

Barragán went on to explain that Congress is continuing to depose witnesses, then make public the transcripts of those proceedings before starting open hearings on the question of impeachment.

The most notable unethical act by President Trump is withholding military aid from Ukraine in exchange for an investigation into political rival, former Vice President Joe Biden and his son Hunter. Not releasing his tax returns and possibly using the office of the presidency to benefit his family and himself, are topics that Barragán highlighted during her nearly two-hour speaking engagement.

“You can’t make money off of being President of the United States,” Barragán said.

The Carson-raised representative was referencing the more than 200 interest groups  including corporations, foreign governments and various political associations that have spent money at Trump properties, not including his attempt to host the G-7 Summit at his Doral Resort.

“You shouldn’t be making money off being a president,” Barragán said. “I frankly believe there’s enough evidence out there to impeach…If this isn’t enough, I don’t know what is. Do we have to wait and see [him] shoot somebody on 5th Avenue … it’s crazy.”

The majority of the audience was mostly middle-aged and senior citizens.
“The reality is that this got escalated when a whistleblower filed a complaint about something about he or she heard on conversations that the President was having with other foreign leaders.” Barragán said. “In this instance, it was with the president of Ukraine. During that call, President Trump effectively was asking the president of the Ukraine for some assistance, to investigate the Bidens, his political opponent.  He used this very clear language. He said, ‘Would you do us a favor?’ It is language like this that have led others, including myself, to basically call this out.”