How OxyContin Killed My Sister... 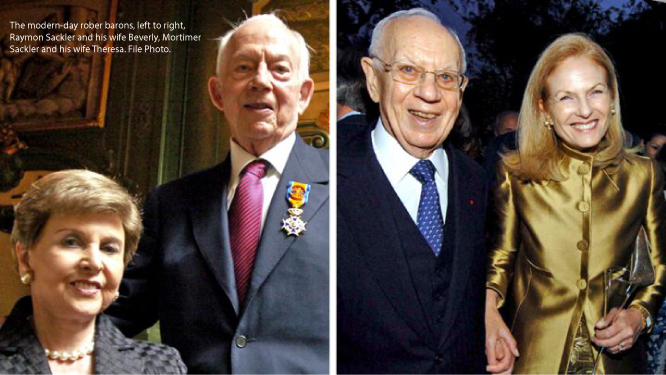 How OxyContin Killed My Sister

Purdue Pharma and the small secretive family of billionaires who own it have made millions from the prescription opioid addiction epidemic they helped to create. All the while, walking the check on its deadly and costly toll with impunity. Until now.

Talk about your bad side effects. Since its release in 1996, OxyContin has been directly responsible for the deaths of more than 200,000 people, destroyed God knows how many lives, and has cost the rest of us trillions of dollars. Yet to date, the drug’s manufacturer (Purdue Pharma) and the private family that owns it (the Sacklers) have paid out just a small fraction of the revenue they’ve taken in from OxyContin in fines and damages.

Before OxyContin took my sister’s life, it took my empathy and compassion. I am not proud of this, but the fact is that I have done a lot more thinking about why Susan died than I did about who was killing her. Even as her life was imploding before my very eyes I told myself what society told me. She has only herself to blame. In the decade since Susan’s death, however, a flood of evidence has exposed the truth. Richard Sackler and Purdue Pharma intentionally manufactured my sister’s deadly addiction for its own maximum profit.

I am far from the only one outraged by this blatant corporate malfeasance. Purdue Pharma as well as eight members of the Sackler family currently face more than 2,000 civil lawsuits filed by state and local governments and tribes. What’s more, in the past Democratic presidential debate fully one third of the contenders, (Harris, Castro, Warren and Sanders) called for Purdue Pharma executives and members of the Sackler family to be held criminally liable for the death and destruction that OxyContin has caused. (Move over El Chapo, meet your new roomies for life.)

To understand just how sharp of an ethical U-turn this growing moral imperative represents, consider just how smooth of a ride the Sackler family has enjoyed until now.

It’s no mystery why the Sackler, Mellon and Rockefeller families are increasingly mentioned in the same breath. Sure, they have those vast fortunes in common. (Although it is interesting to note that the Sackler’s wealth now exceeds that of the Golden grandchildren of the Gilded Age. Forbes’ 2019 list of Richest American Families ranks them 20th, 23rd and 28th respectively.)

But there’s more to it than that. Shine a light on the principles and practices behind their fabulous wealth and the truth is revealed. It’s all the same old white ChristiCon game.

Like patriarchs of plunder before him, Richard Sackler made his fortune at the paradoxical intersection of laissez faire capitalism and racialized criminalization. Although OxyContin was not released until 1996, it is the lovechild of the 1980s and Reaganomics. Swept into office on a tidal wave of white economic anxiety and racial resentment, Reagan simultaneously deregulated Big Pharma and declared a War on Drugs. Slashing government oversight and approving direct-to-consumer advertising for the first time, Reagan transformed the Food and Drug Administration  into the kind of business friendly, pro-pharmaceutical governmental partner Purdue Pharma would require in the future. Reagan’s legacy of sentencing discrepancies for nonwhite crack cocaine users and white powder cocaine users would prove key to OxyContin’s phenomenal marketing success.

Oxycodone, the chemical cousin of heroin and up to twice as powerful as morphine, was invented in 1915. Like opium, from which it is derived, oxycodone has long been considered highly addictive. Prior to the 1990s, opioids were prescribed mainly for severe or acute cancer pain and end-of-life palliative care.

Unlike Percodan and Percocet, which are blended with aspirin and Tylenol respectively, oxycodone is OxyContin’s sole active ingredient. In addition, Purdue Pharma decided to formulate OxyContin in jumbo, long-term release pills with potency as much as 160 milligrams, far exceeding that of any other opioid on the market. Sackler claimed that as a result of the combination of this strength and its slow-release, OxyContin could effectively deliver 12 full hours of constant and consistent pain relief. Significantly reducing the risk of addiction.

Although Purdue Pharma had conducted no clinical studies on how addictive or prone to abuse the drug might be, the FDA approved OxyContin for use in treating moderate to severe pain in 1995. In an unusual step, at the same time the FDA approved a package insert for OxyContin proclaiming that OxyContin was safer than rival painkillers, because the patented delayed-absorption mechanism “is believed to reduce the abuse liability.” Sadly, my sister and countless other severe pain suffers would soon discover the falseness of this claim. Think about it.  Less pain relief than promised + more pain than you can imagine = 0 good options.

Like the vast majority of people whose lives OxyContin has destroyed, my sister was white, economically disadvantaged and lived in a rural community chock full of other poor white folks. In short, OxyContin’s target market. Thanks to the tools at the FDA, OxyContin has been the most aggressively marketed drug in U.S. history. Thanks to the stigma of the Gipper’s war on urban people of color, OxyContin was exclusively marketed to primary care physicians in predominantly white suburbs and rural areas. Not coincidentally, these areas were among those hardest hit by Reaganomics inevitable economic downturn.

Karma is a bitch, but justice is an opportunity

As much as I will enjoy seeing the Sackler family financially destroyed and criminally prosecuted, it won’t bring my sister back. But perhaps her death won’t be entirely in vain. As you may recall, a good deal of progressive legislation was enacted in the wake of the fall of the last Gilded Age. Shouldn’t the downfall of this dynasty of death pay a similar dividend? How about a government that protects health rather one that than sells it? Or, a renewed social safety net that enables community providers to offer community members an alternative to suffering alone? It still won’t bring my sister back, but it just might keep your sister from dying to make some rich plutocrats richer. I hope so with all of my heart.

Heads up to readers who want to know more. Much of the factual information I have provided was gleaned from How Race Made the Opioid Crises by Donna Murch. As well as from up-to-the-minute reporting on this subject found at Vov.com. Check them out, you’ll feel better.