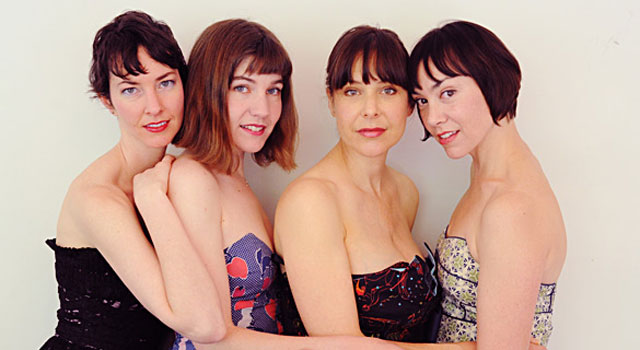 The Living Sisters will leave you breathless as they lace their impeccable voices around 1940s harmony style, pop, jazz, folk and country. When the Grammy-nominated, indie pop/folk outfit came out in 2010, they were introduced as one of the most experienced new groups to hear. That was because the LA based singer, songwriters Inara George (The Bird And The Bee), Becky Stark (Lavender Diamond) and Eleni Mandell have cumutavely spent decades writing, recording and singing and touring globally with their own respective groups. As well, Inara George has music in her DNA. She is the daughter of Lowell George, the late founder of the rock and roll group Little Feat. Becky Stark is  a luminary of the new folk movement and the LA underground punk/noise scene. Mandell’s second album, Thrill,  released in 2000, earned her comparisons to PJ Harvey and Tom Waits. The New Yorker magazine described Mandell “as perhaps the best unsigned artist in the business. And Alex Lilly has released her first solo full-length record. Together, The Living Sisters embrace their love of country, soul, gospel, jazz  with harmonies that highlight poetically charged lyrics and sing-along choruses backed by retro pop instrumentation.

The evening’s opener: Joselyn Wilkinson with Don Barrozo explore the crossroads between modern folk and soul, life and dreams, past and present. Simple, elegant arrangements showcase Joselyn’s soulful voice. The duo performs live in Southern California at regional festivals, events and venues, and has opened for artists including Willie Watson and Chris Stills. Their sound is warm, earthy, evocative, and lovely. Watch for a debut 2019 album release

Doors will open one hour before the concert

Cabaret and VIP Tables seat four. If you purchase 2 seats, you will share your table. Purchase 4 Cabaret or VIP seats to reserve a private table.  Add a dining package to enjoy dinner before the concert; www.grandvision.org/grand-annex/dining-deals.asp.