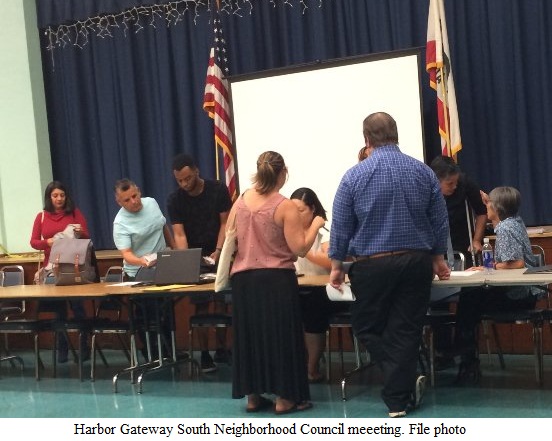 POLA Releases Its 2018 Emissions Report and Crime Is Down

The port is trying to limit emissions as it remains the single largest source of air pollution in the entire Southern California area. The two ports of Los Angeles and Long Beach move 40 percent of the cargo into America and jointly are the largest port in North America, moving cargo  faster, using bigger ships incentivized by the use of cleaner fuel.

Still, the challenge facing the port is how they can reduce pollution to zero on dock by 2030.

The board unanimously approved a letter asking the Harbor Commissioners to include neighborhood council members and members of the community as part of the team that will look over comments from the public about the Public Access Investment Plan for the port. Eugene Seroka, the executive director of the Port of Los Angeles, assembled a team of experts to review comments, but locals should be involved as well, said Central boardmember Frank Anderson said. The letter also asks that town hall meetings on the plan and requested the port present the project at neighborhood councils nearby.

At the Oct. 14 meeting Northwest San Pedro Neighborhood Council, the board elected high school senior Sofia Scalon as their youth representative. She is interested in dealing with the issues of homelessness, automation and littering. She was recently selected to join Mayor Eric Garcetti’s youth council.

Crime in Northwest San Pedro is down overall, said Senior Lead Officer Dan Brown of the Los Angeles Police Department. The only outlier is the homicide rate. There were 16 homicides this year as of Oct. 14, which is the same amount as 2018.

The board unanimously approved a letter asking the City of Los Angeles Recreation and Parks to add a new lockable swinging gate to the Gatun Street entrance of Harbor Highlands park, which would restrict the number of cars that can enter and asked for non-removable stanchions at the other entrances.