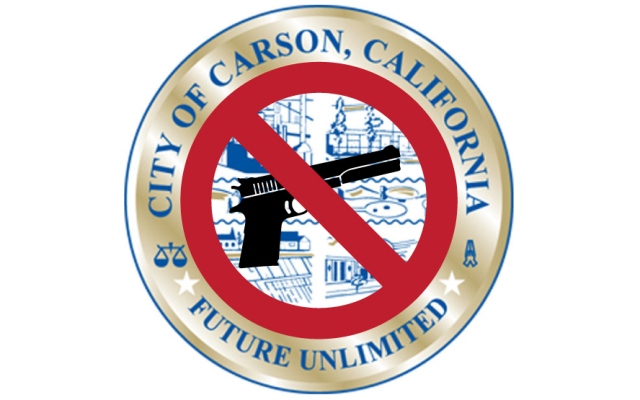 Barely one month ago Carson Mayor Albert Robles failed to win city council approval for a package of gun restrictions that would have all but banned firearms in the city. But that package of proposals was done in when the city council’s decisive vote was deadlocked — two in favor, two opposed and one abstention.

What almost happened? Random Lengths News has tried to find out by following up. A few weeks later, it’s still hard to say —or so it seems, inasmuch as nobody’s saying anything.

Random Lengths made several tries to connect with the mayor by phone. Robles responded with several phone calls to Random Lengths reporter Dennis Freeman, but without warning or advance notice he was not successful. Freeman called back, too, but never got closer to Robles than his voicemail greeting.

It was only a month ago that Robles failed to get his resolution to cripple gun sales and restrict nearly all possession of firearms in the city pass the council chambers this past September. A month later, the council was silent on the issue when ˆ attempted to inquire about the vote and the next steps.

“That is insane,”Robles reportedly said at the Sept. 17 council meeting.

“When I was in school here in our LAUSD, the only drills we ever did was for earthquakes,” Robles said.

Besides Robles, the other yes vote belonged to City Councilman Jawane Hilton.

A fair concern about litigation was also part of the heavy mood around the vote. The city attorney was asked for a staff report on reasons the resolution was presented to the city council.

Because the resolution would have were responsible for dropping the no votes, going against Resolution. No. 19-163, which would have restricted the same and possession of firearms in the city. It was requested that the city attorney’s office bring forth a staff report on why matter was being presented to council.

Ben Jones, representing the city attorney’s office provided a sound and detailed explanation of the importance of restricting firearms in the city.

“To help protect the public from gun violence and prevent mass shootings from occurring in the city of Carson, the proposed resolution provides for the council to direct staff to move expeditiously to exercise the city’s legal authority to the maximum extent possible, to impose land use and regulatory control on gun sales and possession in the city,” Jones said.

The proposal would have discouraged anybody in possession of a firearm from coming within a mile of a school or church, recreation area, bars, restaurants and/or residential zones. If Robles had pushed through the resolution, firearms would have been banned from sale on city-owned property. But Robles ban on guns did not extend to firearms in the possession of residents on private property.

Hicks presented his doubts about the legality of the resolution, hitting the city attorney’s office with a flurry of questions. He then answered his own question by stating the obvious:

“I know a lawsuit is coming, and we don’t need an additional lawsuit when we’re already up against so many obstacles for this city,” Hicks said. “And I don’t want to put nothing else on the backs of the taxpayers when we don’t need to do it.”