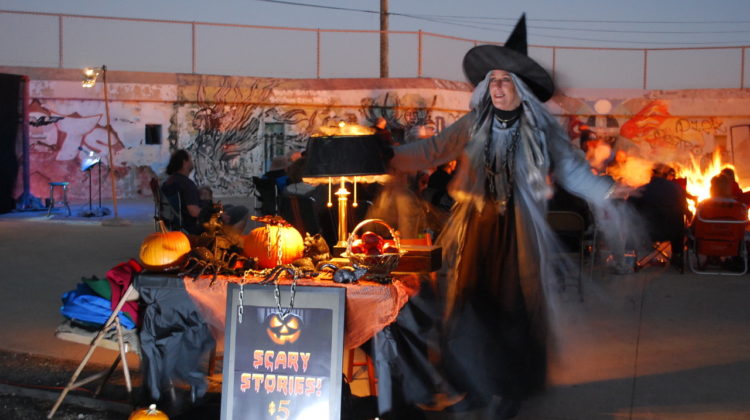 As a child Melanie Jones lived in Japan while her father served in the U.S. Navy. Deprived of American TV she turned to radio which was broadcast by the military. Her favorite show was the Peabody Award winning series Suspense, known as “radio’s outstanding theater of thrills.”  She and her sister would take a transistor radio and hide under the covers on Saturday evening shivering in fear to the tales of horror. The days of radio were already fading in the United States, but in a foreign country the imaginations of children could work overtime listening to stories written to keep you awake at night. Writers such as Alfred Hitchcock and Orson Wells provided scripts performed by Hollywood’s premier actors of the day.

Jones retains her love of drama and for the 17th year she will present Scary Stories at Angels Gate Cultural Center in San Pedro. Scary Stories 17 promises to spark your imagination with tales of terror read aloud in the dark, around a bonfire.

“Human beings since the beginning of time loved to sit around a communal fire and tell stories,” Jones said. “That was the original entertainment. That’s what this is, only with sound effects. The stories are a mix of things that are scary and sometimes things that are humorous. Fear reminds you of your connectedness to things. Even when you are up against forces that you don’t understand, and in these stories people save themselves with whatever skills they may have. There are lots of things in life that can be very frightening  and come at you from surprising angles …  indulging the unpredictability is a way to acknowledge those feelings in a productive way.”

Jones is joined this year by readers Heather Handwerk and Bill Wolski reading works by Shel Silverstein, Carol Gorman, Chris Priestly and David Lubar, among others.

Handwerk is a member of Actors Equity Association and Screen Actors Guild, appearing with American Musical Theater of San Jose, LA Theater Center, Norris Theatre, Little Fish Theatre and the American Academy of Dramatic Arts Co. She offers private coaching and teaches workshops, Love Your Voice and Being Home. Heather lives locally with her husband and their two daughters.

Wolski grew up in Cleveland but has called LA home for the past 17 years. He’s a company member at Little Fish Theatre, where he has given more than 300 performances over the past 13 seasons.

Jones, who appears as The Witch, has bewitched audiences as Emily Dickinson in The Belle of Amherst, and cast her various spells on stages all over the country, both as a performer and director. Previously she was artistic director at Little Fish Theatre.

This unique, annual event showcases unforgettable tales for the Halloween season. The audience provides the visual effects with your own imagination, inspired by the bonfire, the night, the evocative readings and the marvelous sound effects.  This year’s performance will feature all new stories.

Jones recommends to bring your own seating and dress warmly, but free folding chairs are available on site. Picnics are welcome.