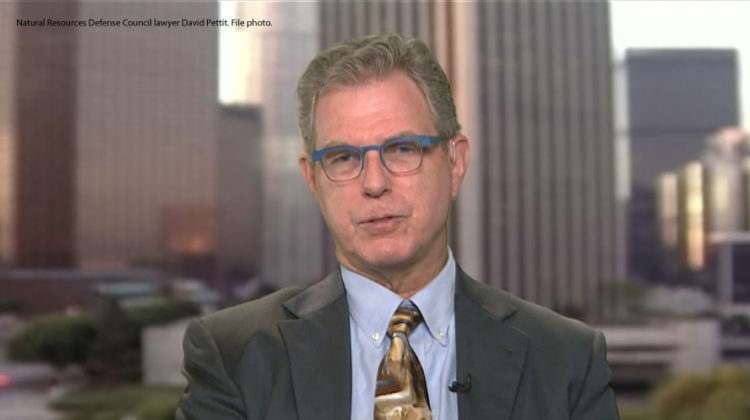 On March 28, 2001, the members of the Port of Los Angeles Harbor Commission approved construction of the China Shipping terminal without a proper environmental impact report, in violation of the California Environmental Quality Act. On Oct. 8, 2019 they did it again.

The 2001 decision led to a historic lawsuit, which the port lost at a cost of more than $50 million. That, too, could happen again. But first, the original plaintiffs and some allies, represented by Natural Resources Defense Council, have appealed to the Los Angeles City Council, calling on it to “overrule and reject” the port’s decision, and directing it to “negotiate a new agreement… that avoids litigation and keeps the terminal open by making good on past legal agreements.”

The first lawsuit led to a 2004 settlement agreement and a 2008 Environmental Impact Report. But in 2015, following a records request from Random Lengths News, the port revealed it had not  implemented 11 of the mitigation measures promised in the 2008 EIR, even granting secret waivers to China Shipping. The new supplemental EIR was meant to redress that failure, but has failed to do so.

“The goal of this final Supplemental EIR is simple: to sweep under the rug over a decade of the port’s failure to comply with the law,” the NRDC wrote in its comment letter. But under the settlement agreement, “the port is rolling out the carpet for economic losses to the tune of millions of dollars,” which would kick in automatically under the terms of the 2004 agreement, in the case of arbitration.

“I should have hauled the port into court four years ago,” NRDC attorney David Pettit said in his public comment. “What we’ve seen is four years of stalling and moving backwards.”

Similar sentiments were echoed by the South Coast Air Quality Management District, which said in its comment letter that “the project should not be allowed to move forward,” after noting that “the project will exceed the significance threshold for nitrogen oxide by up to 159 times,” and that it would “reverse previous commitments to mitigation, including zero and near-zero emission trucks and equipment.” AQMD also noted that the SEIR “does not bind the tenant to the mitigation measures and lease measures,” as is required under CEQA. That’s precisely why the SEIR had to be done in the first place.

“The port is responsible for achieving the agreed emissions reductions previously committed to,” testified Jillian Wong, the AQMD planning and rules manager. “The port is allowing the project to move forward with an increase in its cargo throughput, while removing and weakening—instead of adding and strengthening—existing air-quality mitigation measures.”

Perhaps the most telling comments came from Joe Lyou, president and CEO of the Coalition for Clean Air, who was an original China Shipping lawsuit plaintiff, and an AQMD board member from  2007 through March of this year.

“This is a very risky decision for you,” Lyou told the commissioners, “because it’s not doing everything that can feasibly happen in order to mitigate the air quality and public health impacts.”

Lyou referenced the 2004 settlement agreement. “That legal agreement can’t be unilaterally renegotiated by this port,” he said. “You have to work with us on figuring out where we go from here.”

Pettit pointed out that the resumption of litigation triggers the flow of tens of millions of dollars into an escrow account, which will go to community mitigation projects should the port lose in court —which history suggests is likely.

Lyou made a strong case for all sides coming together to negotiate an agreement. “Other than that, it’s going to get messy, it’s going to get ugly and we don’t want the port to shut down China Shipping terminal,” Lyou said. “That’s not the option that we’re looking to do. At this point as commissioners you’re going to have to step up — going to have to actually come in and negotiate with the plaintiffs as commissioners—because we got nowhere with staff working on this issue for the last four years.”

But Lyou’s comments—just like NRDC and AQMD—seemed to go right over the commissioners’ heads. “With all due respect to the speaker who said he thinks the commissioners have to step up,” Middleton said, “Sorry, I reject that. I’m perfectly happy to have staff negotiate the settlement.”

The NRDC’s comment letter stated that “the Final SEIR violates CEQA’s command to inform the public and decision makers about the environmental harms of the project”—due to both past and future emissions—and that it improperly rejects feasible mitigation measures, “including new zero-emissions technologies that have become available since the 2008 EIR was prepared.”

AQMD provided a list of companies providing a range of zero emission cargo-handling technologies—RTG cranes, top handlers, and forklifts—along with a list of local terminals which had already ordered or begun using them.

Perella pointed to the report’s use of a 2008 baseline for the AMP (shoreside power) requirement, which was 86 percent that year. But for most years, the original EIR required a 100 percent compliance rate. So past shortfalls were undercounted. “Now they want to roll back that mitigation measure to 95 percent,” Perella said.

CEQA does allow mitigation measures to be modified or even abandoned if proven infeasible, but mere sayso is not legally enough—especially if compliance has been previously  achieved.

“There’s actually a presumption that 2008 measures are feasible,” Perella noted, “because the port supposedly did the analysis that they were.”

Likewise, the port approved rolling back vessel speed reduction requirements below levels that have also been achieved in the past.

There are multiple issues regarding different baselines in the port’s report, but they all come down to one thing. “All were asking is for the use of a baseline—and CEQA allows for this—that will provide the most comprehensive and honest accounting for the environmental impacts from the project,” Perella explained. “And we don’t believe that their baseline results in that honest account.”

A further complication is the port’s assumption that the lease will be updated to incorporate the required measures—but that’s exactly what didn’t happen previously, which is the whole reason for this new EIR. Expecting things to be different now, “is just not supported by how things played out in the past,” Perella said.

In its comment letter, NRDC called it “irresponsible and misleading” to assume things would change, yet, “in its analysis, the port inexplicably takes full credit for the emissions reductions that may never happen, and that certainly will not happen starting in 2019. This has the effect of drastically understating the true pollution impacts of the revised project. A more honest analysis would assume that none of the new mitigation measures for the revised project that depend on lease amendment would be implemented.”

AQMD did propose a workaround to combat China Shipping’s intransigence, “a mitigation fee program to incentivize and accelerate turnover of trucks and cargo handling equipment to be zero emissions,” made available to all port tenants. A calculation based on existing state guidelines (the Carl Moyer Program) “results in a range of $26.9 million to $89.8 million in mitigation fees, which could be reinvested into incentivizing zero-emission truck and equipment technologies for the China Shipping terminal to reduce emissions,” AQMD noted.

In short, there are a lot of problems with SEIR that the Harbor Commission approved, and there are a number of potential solutions. The appeal to the City Council asks them to “direct the Board [of Harbor Commissioners] to negotiate a new agreement” where those can be sorted out. The council should take action within six to eight weeks, Perella estimated, based on past experience. But mediation and litigation remain distinct possibilities as well.

“The community has waited 20 years for justice at the China Shipping terminal, and the port promised it would deliver that in 2008, and it failed,” Perella said. “That’s a really unfortunate breach of the public’s trust. And on top of that, a real unfortunate loss for the environment and community health.” It’s a failure that’s been constantly repeated. “The port just can’t get it right when it comes to China Shipping,” she said.