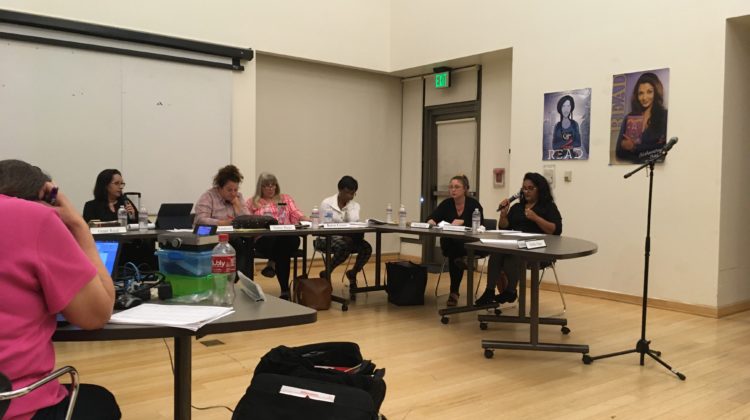 The elected officials of the Harbor City Neighborhood Council could not keep order amongst themselves on the Wednesday night of Oct. 16 when they met at the Harbor Gateway Library for a stakeholders meeting. The three-and-a-half-hour affair started calm but quickly got out of hand once the chair members got past public comment, and they were not able to get through their listed agenda before they had to vacate the premises at the maximum allotted time of 9:30 p.m..

It started simply enough shortly after 6 pm, with Harbor Division Police Department liaison Frank Lopez addressing attendees with a report on crime in the neighborhood. According to Lopez, thefts in the neighborhood were down 10 percent, robberies down 20 percent, burglaries down 33 percent, and grand theft auto is down 76 percent from the last time he reported to the group. Indicating that generally, property crime has been down generally in the neighborhood, although he also added that there were more aggravated assaults than normal due to domestic violence calls.

After answering some questions, Lopez left and Caitlin Muldoon, a Field Deputy from CouncilJoe Buscaino’s office addressed the council and attended stakeholders with a report from his office. News out of Buscaino’s office that she spoke on related to a motion to seek waivers for building codes in place for safety against seismic activity in the construction of temporary homeless shelters, an event announcement for an outdoor screening of The Nightmare Before Christmas on Oct. 25 at the Normandale Rec Center in Harbor Gateway South, and request that stakeholders be patient with the Mayor’s Office as it began rolling out its solutions to the ongoing homelessness crisis through an initiative called the Care program.

There was a minor confrontation when a homeless man attending the meeting confronted Muldoon on the lack of hygienic utilities provided to an encampment at W. 253rd St. and McCoy Ave after they had been promised by city officials a month prior. Muldoon stated that there were jurisdictional issues that prevented the request from being fulfilled before Harbor City resident Joe Zacher began criticizing the city for their lack of action due to seemingly endless bureaucracy. Neighborhood Council Chair Danielle Sandoval brought the minor row to order by requesting Zacher send emails to Buscaino’s office, a notable difference in her methods of conflict resolution in the hours to come.

After Muldoon finished, Octaviano Rios with the Department of Neighborhood Empowerment spoke about a series of updates related to the Neighborhood Council business, and public comment was taken. The public comment section at meetings such as this is often the source of drama, and this night was no exception. First, Olive Reed, a former board member admonished the council for its inability to accomplish many of their listed agenda items over the prior months before receiving a standing ovation from several stakeholders in attendance.

The tension in the room increased as Lori Bordenave-Arnold, Neighborhood Council board member and widow of Caney Arnold who was also on the board until committing suicide in August, broke protocol and took the microphone to tearfully thank members of the board in regards to them consoling her at the time of her husband’s death before admonishing them for having to be told to hold a moment of silence for Arnold at a prior meeting she could not attend. She continued on to make oblique references to events over the past months that were difficult to discern the nature of while pointedly requesting that whatever interpersonal conflicts there were between board members to be buried in the wake of Arnold’s death.

The moment foreshadowed further conflict to come primarily between Bordenave-Arnold and fellow council member Deseray Sarcona in one faction and chair Sandoval and board Treasurer Karen Ceaser in the other once they began addressing old business in the Treasurer’s report after public comment ended over an hour into the meeting.

Starting with a terse exchange between Sarcona and Ceaser regarding a disagreement over who could have access to the Neighborhood Council credit card, members of the board began snickering and rolling their eyes at objections brought up by Bordenave-Arnold. After the ensuing discussion dragged on for 15 minutes, attending stakeholders requested the board move on and the topic was tabled in the first of a series of disorganized votes that the board awkwardly attended to, often begun with a voice vote before stopping and starting again as roll call votes.

This pattern continued throughout the night with mounting tension: Sarcona and Bordenave-Arnold would voice their frustration with conduct by Sandoval, Ceaser, or other board members and in return the other board members would grumble, sarcastically quip, and occasionally cut off Sarcona and Bordenave-Arnold. There were prolonged debates and arguments over almost every single item on the agenda, especially over motions put forward by Sarcona in regards to her Outreach and Beautification Committee requests that required financial appropriation. Parliamentary procedure generally seemed to poorly understood by board members, motions to amend other motions were seemingly perceived as attacks, and Chairwoman Sandoval didn’t keep order among council members so much as continue to express personal frustration that in turn escalated tensions.

At over two hours into the meeting, Ceasar moved to adjourn the meeting, but this motion failed. This cause tensions to further escalate and voices to raise in volume for another ten minutes when just before 8:30 p.m., the lights in the room shut down as part of the library’s power-saving measure. Shortly afterwards Bordenave-Arnold and Sarcona briefly walked out of the room after Bordenave-Arnold motioned for a five-minute recess in the middle of another vote. For a few minutes and completely exhausted, the board was able to vote on a few of Sarcona’s motions before the minute taker had to leave shortly before 9 pm.

After bemusedly laughing at the disorganized meeting that could barely get through Sarcona’s committee motions, Ceasar suddenly left at 9:09 pm in apparent disgust and without explanation during a long discussion over a “Welcome to Harbor City” sign. A pair of stakeholders that had been waiting all night to hear about the council’s Homelessness committee asked when that would be addressed, but as this was Ceasar’s committee, it would never be gotten to this night.

Everything truly blew up when at 9:20 pm, 10 minutes before the meeting had to end due to the library closing, Bordenave-Arnold gave a short speech about a motion to repaint and dedicate a utility box to her late husband. Sandoval disagreed with the proposed painter for the box, saying that they had gone on Facebook and written “ugly things” about the Harbor City Neighborhood Council. This led to a disagreement that soon had to Sarcona sobbing saying, “the fact that we have to fight for this box for Caney is freaking ridiculous,” and with that, all order in the council ceased in a large uproar between board members.

Bordenave-Arnold briefly walked out before returning after the council barely voted to approve the motion and saying to Sandoval, “You are a stone-cold woman Danielle! You are a cold-hearted woman. I can’t go on, I can’t take this anymore,” before leaving the meeting again.

In the last few minutes of the now completely disordered meeting, Council members Denice Wint and Tamera Taylor tried to give brief announcements for their committees, but it was basically useless at that point as several members were already packing up. Shortly thereafter, the meeting was adjourned before an argument broke out between Sandoval and Sarcona that was difficult to comprehend over the din.

Sandoval could be heard saying to Bordenove-Arnold who had re-entered the room, “You are a hypocrite! 100 percent. I’m tired of taking your bullshit!”

The next Harbor City Neighborhood Council stakeholder’s meeting is currently scheduled for Nov. 20 at the Harbor City/Harbor Gateway Library.