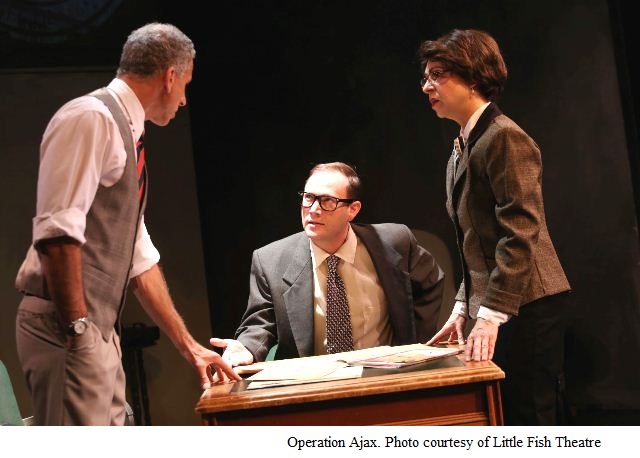 “Operation Ajax” is an Uneven, but Engaging, Primer on the U.S. Meddlings in Iran

Ask even passably educated Americans who Mohammad Mosaddegh is, and you’re likely to receive a blank stare in return. But thanks to declassified CIA memos and relatively recent films like Persepolis and Argo, add “you know, the democratically-elected Iranian leader we overthrew in a coup,” and watch the look of recognition dawn.

Aside from propagating the misconception that Mosaddegh was democratically elected (he wasn’t: in 1951 he was appointed prime minister by the Shah after being nominated by an Iranian Parliament largely hand-picked by the Shah and obtaining office via rigged elections ― which is not to say he didn’t enjoy broad popular support), Operation Ajax hews true to the substance of what actually transpired in Iran between 1951 and 1953. The United States and Britain really did conspire ― successfully ― for Mosaddegh’s overthrow, and it really was all about oil, money, and the Red Scare.

It’s a truly tragic story of America’s often shortsighted and incoherent foreign policy, so it’s a credit to playwrights Matthew Spangler & Farshad Farahat and the Little Fish team that Operation Ajax is not only a passable history lesson but also a pleasant night of theatre.

Kermit Roosevelt Jr. (Christian Haines) ― yes, one of those Roosevelts ― is a CIA operative come to Iran to orchestrate the overthrow of Mosaddegh (Farahat), who has alarmed the U.S. and pissed off the British by nationalizing Iranian oil industry ― which centered on the British-built Anglo-Iranian Oil Company ― under the ethos of throwing off the imperialist shackles unfairly restricting Iran’s “economic and political independence” (as he explained in a June 1951 speech at the United Nations). To help with the operation ― codename: Ajax (after the bathroom cleaner, not the mythological hero) ― he’s got an American-educated local operative named Mustapha (Farahat again) and a boatload of cash to fund various moves in the chaotic chess game of regime change.

Because we know how it ends, Operation Ajax is all about the journey, with Spangler & Farahat never shy about moralizing along the way. “The Iranians will do anything for money,” Kermit superciliously quips early in the play. “These are poor people,” the Shah (Farahat yet again) notes later. “That’s why they’ll do anything for money.” Why are they so poor despite such oil wealth? Because “Capitalism is always biased” ― another way of saying that capitalism is a tide that doesn’t float all boats.

The play’s main voice of conscience is Kermit’s fellow CIAer Roger (Cylan Brown), representing an amalgam of real-life U.S.-government figures who regarded the coup to be a very, very bad idea on all counts. He pops on and off stage throughout the play, decrying this side of U.S. foreign policy as “ambition devoid of ethics, ambition devoid of purpose.”

Dramatically, the onstage action feels a bit too synopsized. Kermit is really the only character we have any hope of identifying with, but he’s not especially sympathetic in general; and the one scene where Spangler & Farahat shoehorn a bit of his backstory (haunted by Grandpa Teddy’s man-of-action spirit) falls flat.

But two elements save this shortcoming from being fatal. One is the wryness Spangler & Farahat fit into the dialog. Midway through the operation it becomes necessary to move Kermit from his hotel to the U.S. Embassy. “Nobody, and I mean nobody, gets into the U.S. Embassy,” Roger boasts, a joke whose punchline comes 26 years later. There’s also a rather funny bit about how the coup has to be delayed because Iranians ― government and protestors alike ― take Fridays off.

The second saving grace of Operation Ajax is how ― via opportune projections of archival footage ― the playwrights and Little Fish remind us that this debacle really happened. The CIA and MI5 really did foment massive unrest in the streets resulting in the deaths of hundreds of Iranis, really did overthrow a leader who really did have as close to a democratic mandate as was possible in Iran, really did supplant him with Nazi collaborator Gen. Fazollah Zahedi, really did orchestrate the brutal dictatorial rule of the Shah. And that was just in the short term! In the long run, well, we know how things turned out for the U.S., the Middle East, and the people of Iran.

Oh, and remember the Anglo-Iranian Oil Company? In 1954 they would change their name to British Petroleum and, with Mosaddegh out of the way, get their hands back into the Iranian oil market and use the momentum to expand their operations. Today they’re called BP, one of the world’s six energy “supergiants,” a company with one of the worst safety and environmental records in history.

Perhaps because none of the characters is fully fleshed out on the page, the acting is hit and miss. The Brits are perhaps a tad to stereotypically British, and a fit thrown by Kermit when the coup appears to have fallen apart is totally unconvincing (gotta hold director Suzanne Dean partly responsible here). But Farahat does fine work, making each of his four roles (he plays Zahedi, too) distinct despite little reliance on costume (and none on makeup).

Dean and Scott Walewski do well with their simple but highly serviceable set, implementing the rarely-used second level at the Little Fish Theatre to good effect. If there’s a shortcoming in the mise-en-scène, it’s the sound design, which employs a rather unconvincing array of sound effects that err on both sides of the volume spectrum.

Nonetheless, Operation Ajax is never unengaging. That, combined with its window on real-world history, is enough to tip the overall experience toward the positive. If nothing else, it’s good to be reminded of just how craven and myopic U.S. geopolitics can be…and has been…and still is.