Thousands March at LAX for Uni... 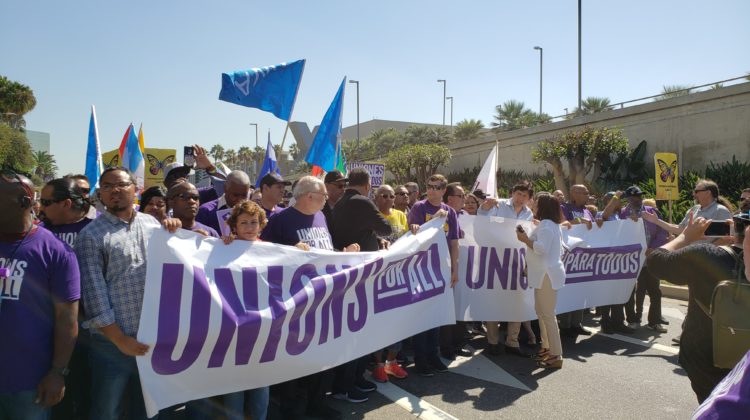 Thousands March at LAX for Unions

On Oct. 2, more than 2,000 airport employees and rideshare drivers rallied at Los Angeles International Airport in support of the “Unions for All” movement. LAX employees, Lyft and Uber drivers, homecare workers, city employees and other supporting unionists rallied together in this organizing effort.

Most workers were from Service Employees International Union and UNITE HERE locals as well as workers from the Mobile Workers Alliance, Coalition of Airport Workers United and a few Teamsters.

“Subcontracted workers live in a different world — as janitors, cabin cleaners, wheelchair, attendants,” Mannix said.  “We are working for a billion-dollar industry.  Yet we struggle to put food on the table.  We are mostly immigrants and people of color fighting for decent wages and health care.”

Mobile Worker Alliance service driver Constantine Anthony rallied the crowd by asking: “How many of us make less than minimum wage after doing 8 to 10 hours work?  The only way to fight back is to lock our arms together in a union, join together. We can thank the legislature and Gov. Gavin Newsom for passing AB5 (designating many independent contract workers as actual company employees entitled to certain benefits), but the fight is still ongoing.  An individual worker can be bent and broken, but united we are strong.  You have the power to change this country.”

“We are under attack by the president, the Supreme Court and big business,” Wesson said. “Let’s fight back and let’s put a union card in the back pocket of drivers for Lyft and Uber.”

“You are the reason the economy works and companies are making incredible profits, but their success is not being felt by workers,” Hahn said. “The best way workers will be treated fairly is through unions and only through a union will women get equal pay for equal work.”

Later in the day, airport catering workers with Local 11 of Unite Here marched through Tom Bradley International Terminal as part of a national day of action for roughly 11,000 LSG Sky Chef workers at 30 airports nationwide who want the same healthcare benefits afforded their colleagues at Flying Food Group, said union spokeswoman Maria Hernandez. There are 700 LSG workers at LAX.