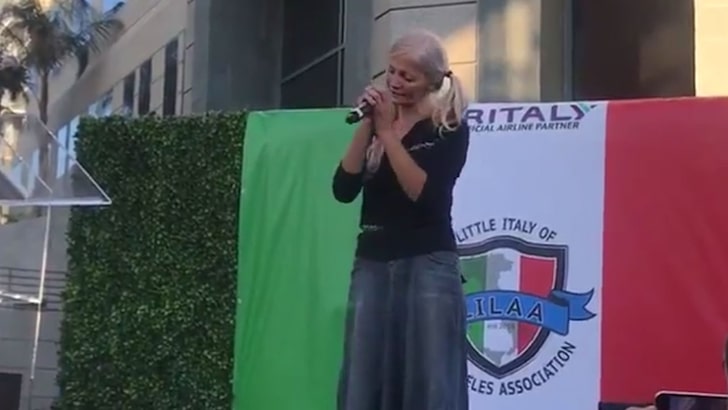 Hundreds of local residents attended the grand opening of the new “historic” Little Italy District on Oct. 5 to mingle among open air stalls, listen to the viral hit “Subway Singer” and get a taste of self-laudatory local government … along with some pizza of course.

15th District City Councilman Joe Buscaino emceed the day’s events which ultimately stemmed from a motion he proposed in June of 2018 to designate a portion of San Pedro as an officially recognized Little Italy district. The event closed off 6th Street between Centre and  Palos Verdes streets from 5 to 10 p.m. to allow  residents to visit stalls set up by local businesses and purchase Italian food with $2 tickets.

After some brief opening remarks on a stage in front of the Harbor Gateway Work Source Center, Buscaino introduced Emily Zamourka, a Russian immigrant opera singer who reached online viral fame when a member of the Los Angeles Police Department tweeted a video of her singing on a Koreatown subway platform. Since the upload in late September, the video has gotten over a million views on Twitter. Zamourka, who recently received a record deal and an outpouring of financial support online, performed the same Italian opera from the video — Puccini’s aria  O Mio Babbino Caro — before being surrounded by dozens of well-wishers and media outlets.

Following Zamourka’s performance, Buscaino continued to bring local city government officials and notable participants in getting the section between Centre and  Palos Verdes streets along 6th designated as a “historic” Little Italy district. This included Mike Gatto, the Chairman of the Little Italy of Los Angeles Association, the group responsible for organizing the day’s events.

LA County Supervisor Janice Hahn was on hand, promising to donate $50,000 to build a fountain piazza in the Peppertree Plaza out of the county’s discretionary fund. Buscaino also announced that the Topaz building at 6th and Palos Verdes was recently sold on Oct. 1 and the new owners were promising to fill every storefront in the structure with Italian businesses. Buscaino then announced that one of the oldest Italian businesses in San Pedro, A1 Italian Deli, was moving to 6th Street next to longtime San Pedro restaurant Buono’s Pizzeria, serving as anchors for future development.

After presenting several awards to themselves and others in their circle, Buscaino, Hahn, State Senator for the 35th District Steven Bradford, State Assemblyman for the 70th District Patrick O’Donnell, and the Dana Middle School Dance Team headed to the corner of 6th and Centre for the official unveiling of the sign indicating the area as Little Italy.

Fate may have disagreed with Buscaino’s intentions, for when he and the other local government officials pulled the covering off the sign, it ripped in half and remained partially stuck while red, white and green confetti was fired into the air from cannons. Shortly thereafter the fire department was called, and 6th Street was effectively closed to traffic while city workers swept up confetti and a fireman took down the fabric that foiled Buscaino minutes earlier.