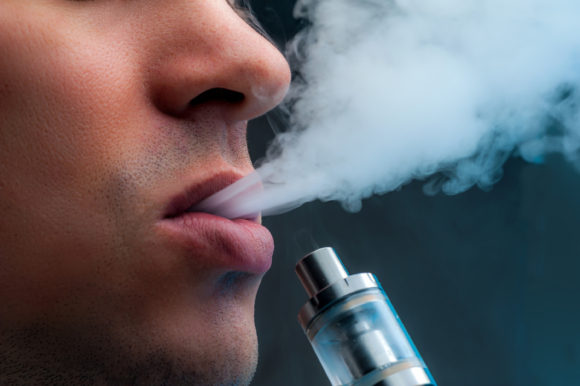 On Oct. 10 the Los Angeles County Department of Public Health (Public Health) released yet another warning to the public to – stop vaping now. The department has called out the lobbying efforts of Big Tobacco, while at the same time aiming to clear up misperceptions about e-cigarettes use.

Despite its efforts to educate the public about the dangers of vaping Public Health reports inaccuracies and misperceptions about the role of tobacco control policies hang on, such as the flavor ban recently passed by the Los Angeles County Board of Supervisors. The department posits that the tobacco industry’s lobbying efforts are at the core of this campaign which is “designed to create a false sense of safety for those wishing to vape.”

The public health department addressed three common misperceptions about tobacco control policy relating to vaping and provided an update on the lung illnesses and deaths associated with vaping. These include:

Nationally there have been more than 1,000 cases of VAPI, and 18 confirmed deaths, including one in LA County.

It’s been inaccurately asserted that, vaping-associated pulmonary injuries (VAPI), are primarily caused by black-market cannabis products like “Dank Vapes,” as some news reports have suggested

While some of these cases involve the use of products containing cannabis obtained outside of regulated dispensaries, the department reports there is no evidence that these lung injuries were due exclusively to the use of any specific product, with or without cannabis related elements like tetrahydrocannabinol (THC). Some people who became seriously ill in LA County did not use vape chemicals containing THC.

Flavor bans are primarily intended to restrict the unscrupulous marketing of flavors to young people and do not include products with regular tobacco flavor. Another misconception is that, vaping devices like e-cigarettes are effective cessation aids, and flavored tobacco bans unnecessarily restrict access to adults looking to quit smoking

The U.S. Food and Drug Administration (FDA), which regulates nicotine replacement therapy products associated with quitting smoking, has not approved e-cigarettes as a viable cessation aid. Very few manufacturers of e-cigarettes or other vape devices have undergone the FDA process to obtain official certification. Public Health noted that many users of e-cigarettes report that they vape much more than they smoked, meaning they are introducing significantly more addictive nicotine into their bodies than ever before.

It has been suggested that, states and cities have been reactionary in rushing to crack down on vaping products

The Board has been methodical in arriving at this ban, with almost one year of careful deliberation on the subject, and 180-days of implementation. Jurisdictions, such as the County of Los Angeles, typically enact tobacco control policies such as the flavor ban with appropriate vetting through their legal counsel, department of consumer affairs, and public health departments. Relevant issues such as ensuring that complementary resources are in place to assist people with nicotine addiction are carefully considered in advance.

Weekly Update on Lung Illnesses and Deaths Associated with Vaping in LA County:

As of Oct. 9, there are four new reported cases of serious vaping- associated pulmonary injury and one death associated with e-cigarettes — bringing the total to 25 in Los Angeles County.

About two out of three cases reported are in individuals age 25 and younger. Both male and female cases have been reported.

All but one case reported using both e-cigarette and cannabis-type products, not necessarily at the same time. One reported using flavored liquids only (no nicotine, THC, or CBD). Various devices and products were reported and remain under investigation. No specific vendor, product, or substance has been identified as the cause.

In a related event, U.S. Senator Kamala Harris Oct. 10, joined Senator Richard Blumenthal (D-CT) and 8 of their colleagues in writing to K.C. Crosthwaite, CEO of Juul, the makers of flavored vape liquid to end forced arbitration agreements and other anti-consumer provisions from its terms and conditions for online sales.

Sen. Harris office stated, forced arbitration clauses restrict people’s access to justice by removing consumers and workers right to go to court. Instead, consumers and workers are forced into an arbitration system where corporations can write the rules; everything can be done in secret, without public rulings; discovery can be limited, making it hard for consumers to get the evidence they need to prove their case; and there’s no meaningful judicial review, so consumers and employees are often unable to appeal a decision even if the arbitrator gets it wrong.

“Juul as a company holds great responsibility for addicting a new generation of young Americans to nicotine through enticing flavors, targeted marketing, and branding Juul as the new hot trend. Now your company has chosen, in the face of an onslaught of incoming litigation, to brazenly prevent Americans from having their day in court. These are nearly the same tactics that Big Tobacco used to evade civil liability for hooking generations of Americans on cigarettes. In light of the ongoing youth vaping epidemic caused in large part by Juul, the only decent course is to remove the mandatory arbitration and class action waiver provisions in your Terms and Conditions,” wrote the senators.