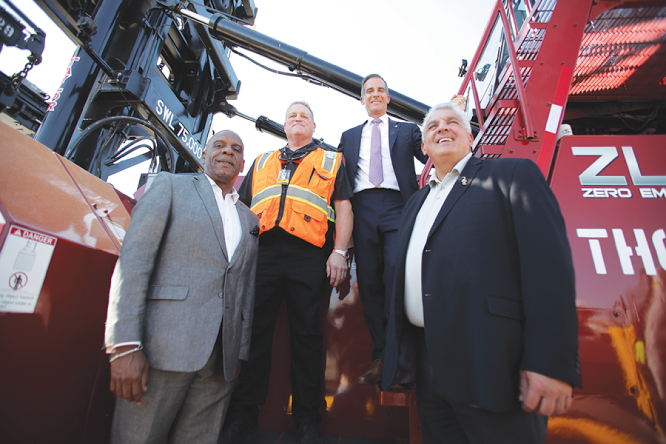 The new “top-picks” or “top-handlers,” are large vehicles used within a terminal to load and stack containers weighing up to 70,000 pounds. The American-built battery-electric vehicles are supported in part by a $15 million memorandum of understanding signed last year between the Los Angeles Department of Water and Power and POLA for port-wide charging infrastructure, as well as a $4.5 million sustainability grant from the California Energy Commission. There are currently between 200 and 400 diesel top handlers now in operation throughout both ports.

“Every Angeleno deserves to know that future generations will inherit a sustainable city and a livable planet — and that our air, water, and natural resources will be protected and preserved,” Garcetti said. “Clean Air Day gives LA an opportunity to show what it means to put our principles into practice with cleaner transportation, goods movement, and energy sources — to leave a healthier world for our children and grandchildren.”

Garcetti was joined by Rep. Nanette Barragán, Los Angeles County Supervisor Janice Hahn, State Senator Steve Bradford and Ray Familathe President of ILWU 13 to unveil the zero-emission equipment as part of the California Clean Air Day — a call for the state’s residents to take individual and collective steps to improve air quality and promote public health. The POLA is significant in as much as it remains the largest single source of air emissions in all of Southern California.

“We’re excited to power up these battery-electric top handlers and test them under the real-world conditions of a working container terminal.” The port has committed to replacing all terminal equipment with zero emissions equipment by 2030. Taylor Machine Works in Louisville, Miss. designed and built the new top handlers at a cost of about $1.4 million each and they will be operated and repaired by union workers.