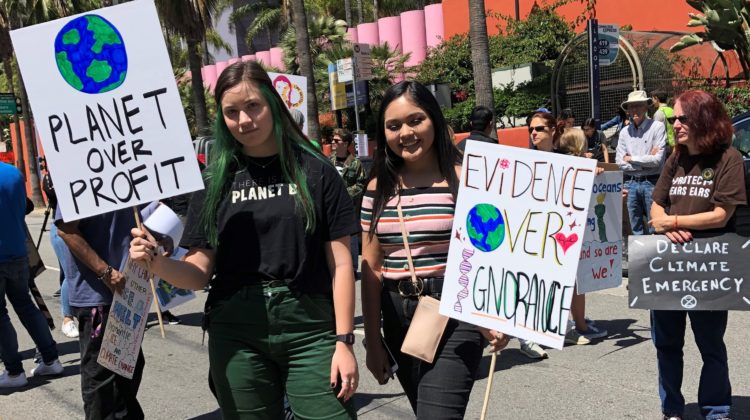 Youth Climate Strike — The Voices of the Future Call Out

More than 4 million people in 185 countries around the globe took part in Climate Strike on Sept. 20, a little more than a year after Swedish teenager Greta Thunberg started the practice as a solitary exercise.

This explosion of awareness and activism stands in stark contrast to the continued cluelessness of most of the adult world. It comes less than a month after Hurricane Dorian, the fifth Category 5 hurricane in four years, ravaged the Bahamas and the U.S. southeast coast, with almost no mention of climate change on network news segments. A survey by Media Matters found global warming mentioned just once in 207 segments from Aug. 28 through Sept. 5.

The contrast between adult ignorance and youth activism could not be more stark.

“Over 4 million on #ClimateStrike today. In 163 countries. And counting…” Thunberg tweeted, before the full extent of the protests was recognized.

“If you belong to the small number of people who feel threatened by us, then we have some very bad news for you:  This is just the beginning. Change is coming — like it or not.”

Both the trajectory of how rapidly the movement has grown and the logic behind it say she’s not wrong. There’s a rapidly growing network of student-led groups around the world, combining a shared global goal with specific local concerns and proposed solutions. Some of these are newly formed in response to Thunberg’s lead example, but many youth-led efforts were already under way.

Two notable examples in the U.S. were the Sunrise Movement, founded in 2017, which has played a major role in advancing the idea of Green New Deal. The 2015 lawsuit, Juliana v. United States, that was brought by 21 young plaintiffs alleging that the government had violated their rights by encouraging and allowing activities that significantly harmed their right to life and liberty. It’s still proceeding at trial, as the Supreme Court has twice rejected motions to delay or dismiss the case.

Now, for the first time, striking students invited adults to join—and the response was telling, from trade unions representing hundreds of millions of people around the world to health care professionals and tech workers at companies like Amazon, Google and Facebook.

Like many in her generation, Thunberg has been aware of climate change from early childhood. She became intensely focused on it around age 11 and went through a period of profound depression and despair. “She fell into a depression. She stopped eating, stopped talking. And she fell out of school and stayed at home for almost a year,” her father, Svante Thunberg, told Democracy Now! last December in a joint interview.

As the impacts of climate change have grown more pronounced — extreme weather, melting glaciers and ice caps, loss of habitat, forced migration. Young people are increasingly faced with the visible signs of a desolate future their parents have done nothing to protect them from. So her experience, leading to activism, is indicative of a global generational awakening.

“When I first learned about the climate crisis as a kid, I would lie awake at night, my heart pounding,” Sunrise Movement co-founder Varshini Prakash said in her speech in New York’s Foley Square.

“I felt alone and small and powerless. And I know that that is the story that so many young people are feeling right now.”

Children on every continent echoed her, starting in Australia, where over 300,000 showed up — the largest wave of climate actions ever seen there.

“When I make a mess, my mum makes me clean it. If they were so smart, they’d clean up after themselves too.”

But Thunberg’s initial experience was more intense than most. “Because I have Asperger’s syndrome, so I work a bit different. I see things black and white,” she said. Plus, “I don’t like lying,” and she focuses intensely — as she did when learning all about climate change. She calls it her “superpower.”

One reason for that, author Naomi Klein said, in a recent Democracy Now! interview, is that kids on the autism spectrum don’t engage in mirroring, like in a game of Simon Says. “We’re constantly mirroring each other. We’re looking to one another for social cues to tell us how to act.” But, “A lot of kids on the spectrum just don’t have that instinct. They don’t have that impulse. They just do their own thing, right?”

But then the mirroring influence sets in: most kids get overwhelmed with confusing mixed messages.

“We live in a culture, in an economy, that, on the one hand, is telling us we’re in the middle of this existential emergency… but then, the next minute, it’s like, well, go shopping, you know, watch a makeup tutorial on YouTube, imitate celebrities….  So, if your impulse is to mirror, you’re getting very conflicting messages.”

For Thunberg things were much clearer — even if painfully so. She isn’t the only young leader on the spectrum, Klein noted.

“It’s precisely because they lack that impulse to look to other people to tell them the right way to feel about this, that they trust their initial instinct,” she said.

But the dramatic growth of the Climate Strike movement is giving children and youth a diverse proactive emergency response to mirror, led by others just like themselves, replacing the adult-fostered complacency that has squelched action for so long.

That response is informed by the science, by the diversity of their experience, listening and learning from one another as a globally-interconnected generation, and by an awareness of what they’re up against. The science has long been crystal clear. Children from vastly different cultures see themselves and their most basic concerns reflected in one another’s struggles and aspirations. And the battle-lines have been drawn even before they were born.

“We have grown up seeing the political establishment fail us,” Prakash said. “And for twice as long as I have been alive on this planet, we have known about the crisis. For just as long, the wealthy and the powerful have profited off of pollution, have lied to millions of people about the science, have choked our democracy with their Big Oil dollars and stolen our futures.”

The Local Face Of Global Emergency

The Wilmington community is typical of some of the most significant aspects of this movement:  how macro- and micro- issues and organizing fit together, how the climate crisis intersects with other health and environmental crises, and how long-neglected marginalized people need to be heard.

“Local youth understand that their presence is imperative in this movement, especially in this LA action,” said Ashley Hernandez, an organizer with Communities for Better Environment who works closely with students.

“Being from the city that has the highest concentration of oil drilling, this action is an opportunity for us to really call for Gov. Newsom to implement the changes and take the urgent action we need, by stopping fossil fuel projects, by dropping existing production and to roll out setback limits by creating a 2,500 foot health and safety buffer between fossil fuel infrastructure and our sensitive receptors like our homes or schools and daycare at our churches.”

The issues she highlights are not usually top of mind when discussing global warming. But they’ve been pushed repeatedly by environmentalists and environmental justice advocates in California, even as the state has enjoyed a reputation that’s shielded it from scrutiny—but which is far from justified, given what hasn’t been done.

California’s fossil fuel consumption-cutting goals are admirable, but it must cut production as well –– a strategy Oil Change International calls “cutting with both arms of the scissors” in order for global greenhouse gas emissions to fall. The best place to start is where production is most damaging to community health and safety —in with communities like Wilmington at the top of the list.

“We have some of the highest rates of asthma, cancer, bronchitis, birth defects, miscarriages, Hernandez said. “This is an urgent matter. If this were happening in another community, there would be action.” She pointed to the quick response to just three deaths due to vaping, compared to countless thousands of deaths from air pollution.

“This issue is not just something that we’re looking at through a climate crisis lens; we are definitely seeing this is a health crisis, and Gov. Newsom needs to do something about that. Joe Buscaino, our city councilmember, he needs to do something about that,” Hernandez said.  “Permitting projects that are just going to worsen the quality of life is a huge disservice to the communities, the vulnerable black and brown low income and also indigenous communities that we have throughout the nation and throughout the world that are trying to regain the sovereignty of their land.”

On Monday, after the strike, Thunberg addressed the U.N.’s Climate Action Summit in New York City. “You have stolen my dreams and my childhood with your empty words. And yet I’m one of the lucky ones,” she said. “People are suffering. People are dying. Entire ecosystems are collapsing. We are in the beginning of a mass extinction, and all you can talk about is money and fairy tales of eternal economic growth. How dare you!”

The existing targets — cutting emissions in half in 10 years—only provide a 50 percent chance of avoiding “setting off irreversible chain reactions beyond human control,” she said. “A 50 percent risk is simply not acceptable to us — we who have to live with the consequences….”

“You are failing us. But the young people are starting to understand your betrayal. The eyes of all future generations are upon you. And if you choose to fail us, I say: We will never forgive you.”