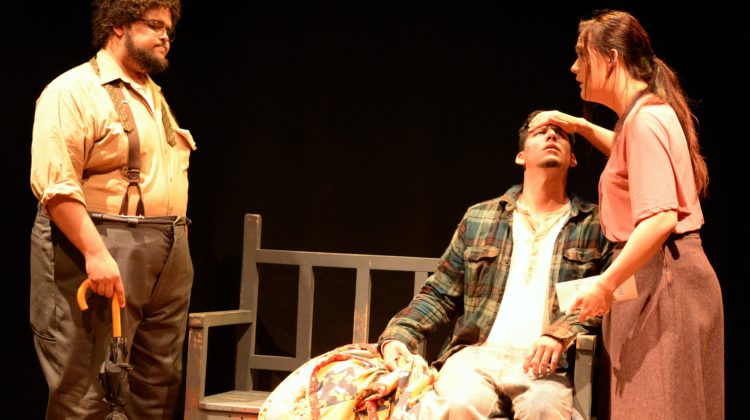 Somewhere between Endgame and No Exit lies Mud, María Irene Fornés’s dark, quirky meditation on the poor condition of the human soul. Or the human soul in poor conditions. Or the conditions that make for poor human souls. Something like that. By remaining stylishly vague, Fornés invites you ― almost forces you ― to project meaning onto Mud. That’s fine if her stylish vagueness tickles you; otherwise, you may feel there’s not much there.

Whatever the case, by delivering Fornés’s text with sufficient fervency, director BJ Dodge and company keep us engaged enough with the performance that we don’t much mind if we come away from our 80 minutes in the Players Theatre with little in the way of lasting impressions.

Mae (Kimberly English) and Lloyd (Riky Garcia) have lived in her now-deceased parents’ hovel since they were children. He tends to the crops and animals, while she does the housework and goes to school, trying to lift herself above the “hollow and base” condition of their existence. She is enamored of Henry (Aaron Allen). He can read fluently, knows how to say grace, and generally makes her feel in touch with a higher plane, so she invites him to move in with them and takes him as a mate.

Why he moves into such a place is anyone’s guess. Fornés doesn’t give us anything on that score, Apparently he has more money than Mae and Lloyd, which makes his choice even curiouser, especially considering that Lloyd isn’t exactly shy about his displeasure with the new arrangement.

But plot and reason are beside the point in Mud; we’re meant to focus the inner landscape of these characters, the internal logic. And before we know it, thanks to the actors’ externality ― all three do fine work, but Garcia stands out simply by nature of his fey physicality ― we’re caught up in these involutions, which churn and tighten until their inevitable break.

Because Mud‘s action takes place entirely in one room, and because the Players Theatre small stage area is open on three sides, it’s a credit to Brenden Mukanos’s rudimentary but tasteful scenic design that we feel like flies on the wall of an authentic physical space. Also worth mentioning is Kaitlin Trimble’s lighting, subtle enough that you have to pay close attention to notice just how many lighting cues she hits.

The only production element that draws attention to itself concerns Trimble and sound designer Will Harper, who combine to demarcate scenes with what one might label a “Polaroid effect,” complete with the actors in tableau. Although Dodge seems to be riffing off a particular line Mae says about light near play’s end, the sound cue is a bit odd. But as with the play itself, we don’t need to understand the intended substance to go with the style.

In her program notes, Dodge avers that with this play Fornés “has written about the mud that poverty can create, and perpetuate. Poverty is the fourth character in this play.” Maybe that’s right, maybe not. Because Fornés says far more about the soul than poverty ― in fact, she doesn’t explicitly say anything about poverty (and almost nothing about society) ― for all we know the poverty in the play may be a metaphor for the innate baseness of humankind. Having poor characters doesn’t inherently make it Les Misérables, you know?

But, again, it doesn’t matter. Dodge may be projecting, but Mud works as a decent screen. And because of what director and cast do with Fornés’s style, you don’t have to see it like Dodge does to dig what they’re doing.