Lack of Subtlety Leaves This &... 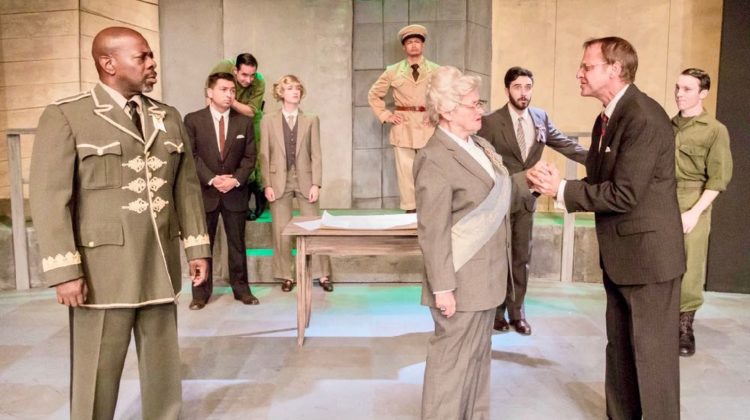 Over the past four centuries we’ve come a long way in our understanding of psychology, and audiences have become a lot more sophisticated ― developments that make Othello feel a bit like an old chestnut. Yes, there’s the way-ahead-of-its-time consideration of what Public Enemy calls “fear of a Black planet” ― relevant all the way to today. Fine. But come on. Does Othello’s jealousy or Emilia’s complicity make any kind of sense? And must the Bard to beat us over the head like he does? Yes, by all means, have Othello say Iago’s honest. But 7, 8, 9…12 times? Really? (Yeah, I counted. The last is “honest, honest Iago,” in case we didn’t get the point after the first 11).

But Shakespeare’s deification in the English literary canon and historical importance means far lesser plays than Othello will be performed probably as long as English is spoken somewhere in this universe. And they’re being performed continually right now. You may never live in a time when somewhere on this globe Iago is not making Othello crazy, with jealousy driving them both.

So the question before us here is how well Long Beach Playhouse does with a story we know so well.

The answer is mixed. With a central cast that’s up to the task, director Aurora J. Culver gets some great stuff in the subtle moments. But when the emotional intensity dials up, the wheels come off.

Obligatory synopsis for the three people reading this who don’t know the story: Othello (Alexander Harris), the leading general of the military power that is Venice, has taken to wife Desdemona (Carly Taylor), daughter of a prominent government official who is none too keen on Desdemona’s eloping with a Black man. But Othello’s reputation in Venice is stainless. Besides, Othello ― along with senior military officers Iago (Don Kindle) and Cassio (Christian Jordan Skinner) ― is needed in Cyprus to fend off an invading Turkish fleet. But this is all prelude to the real conflict, which is basically Iago versus everybody.

No production of Othello has a chance in hell without a good Iago, and this one’s got one.  Kindle brings an understated oiliness to the role that makes us believe why those around him are so trusting of his malevolent machinations. Just as important is his handling of several monologs delivered directly to the audience. With some obviously sound direction from Culver, Kindle takes his sweet time, coolly keeping us on his train of thought.

Of course, you better have a strong actor in the title role, too, and Harris is another casting coup. Commanding and stately, we never wonder how this man rose so high and married so well in a society where the color of his skin was an almost insuperable barrier to both.

Eventually, however, all of the acting goes south. Although we get a glimpse of bad things to come in the play’s opening scene (where a minor character literally yells almost every one of his lines), because the emotions don’t ratchet up until later, we don’t know what a persistent problem this tendency will become. But after intermission even Harris devolves too often into histrionics, and pretty much every actor goes there with him when they get upset. Just as Culver deserves credit for the success in the play’s subtler and quirkier moments (see below for an example of the latter), she’s largely to blame for letting this happen.

Culver also gets poor marks for blocking. She has the actors cheat to the audience so much that many of the character interactions are completely sabotaged. Then there’s the final scene, which (aside from being terribly overlit ― the only failure in Daniel Wally’s lighting design, but it’s a doozy) features the inscrutable gaffe of having Desdemona on her feet when Othello says, “Thou art on thy deathbed.”

These failings undo a lot of good work in the play’s first half, including a good fight scene and dollops of unexpected humor. The best bit comes when Othello and Desdemona are reunited in Cyprus. As they coo and make goo-goo eyes at each other, one of Othello’s officers (played by Bernard-Benjamin Villa) can’t suppress sidelong glances of annoyance at their cloying affection. Rather than drawing attention to this comedic interpolation, Villa keeps it close to the vest, which is what makes the scene so funny.

It’s a shame Culver didn’t hew to this instinct throughout the play. As written, Othello is a work of excess, and playing to rather than tacking away from that weakness only serves to make it seem dated. No doubt audiences in Shakespeare’s time needed things shoved down their throats. But we don’t.