An Educator Brings her Mission... 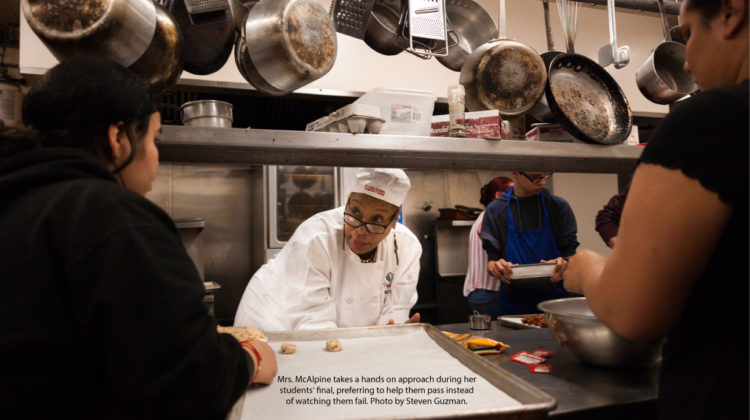 An Educator Brings her Mission to the Kitchen Table

Franki Bellhouse-Garcia never had a plan and had resigned himself to a life working the docks until Mary McAlpine helped him see his potential and change his life. As the Regional Occupational Program culinary arts instructor at Banning High School in Wilmington, McAlpine spends her days teaching teenagers the culinary arts, but more than that, teaching them life skills. Her classes provide an alternative to traditional education that prepares them for life outside of school. Although she has been teaching for more than two decades, being a teacher had never been in her plans.

McAlpine always had a passion for cooking. Having grown up in the small town of Forkland, Ala., a part of a South with a history fraught with poverty and racism, McAlpine experienced its inequities and scarcities. Families were left with few options when it came to nutrition. This helped McAlpine understand the relationship between food and health and the ways it can affect a community.“[Residents] were very low-income and there were a lot of illnesses,” McAlpine said. “They had these illnesses because there were not a lot of healthy food options available that they could afford.”

It was her understanding of this relationship that eventually helped McAlpine determine how she was going to use her passion for cooking to give back to her community.

While she briefly considered a career as a nurse, an allergy to formaldehyde ended that goal quickly. McAlpine was still set on helping her community, but needed another way of doing it. Although she loved to cook, being a chef was not something she felt was right for her at the time. After some contemplation, McAlpine shifted her goal and set forth to become a dietician.

“That was my goal and focus,” McAlpine said. “Even when I was in grad school at Long Beach State, my focus was to be a dietician and to really help my culture because I saw a lot of illnesses and diseases that were attributed to their diets.”

After moving to California in 1981,  McAlpine began working at a hospital as a dietary manager but quickly realized that perhaps it was not exactly what she wanted.

However, her hospital work did help McAlpine once again focus on the relationship between food and health.

“As a dietary manager, it allowed me to work on a case study that examined patients with diabetes,” McAlpine said. “Seeing how their health was affected by the food they ate really intrigued me.”

Recognizing her need for creative space, McAlpine left her position at the hospital. She knew she still wanted to be in the culinary world but needed time to figure out how to reach her goals in a way that allowed her to be true to herself. She began working with the Los Angeles Unified School District. She was in charge of managing cafeterias. It was a chance encounter with a Regional Occupation Program (ROP) instructor while working that changed the course of her life.

ROP is an educational program that focuses on teaching students vocational skills. After the passage of the Smith-Hughes Act in 1917, states slowly began to take the initiative of adding programs to their schools. Beginning in the late 1960s, California started incorporating this program into schools statewide. Teachers chosen to teach ROP courses must have over three years of career-based experience. McAlpine’s experience made her the perfect candidate to teach culinary skills in the ROP program. “One day when I was on my job, a gentleman from ROP began talking to me,” said McAlpine. “He told me that just from meeting me and talking to me that maybe I needed to be in ROP. He convinced me to try so I decided to apply. I got the job pretty quickly and I’ve been with them ever since.”

Once she began teaching ROP classes in culinary arts, she quickly realized that teaching and getting to connect with students came naturally. She was given an option of where to teach. McAlpine chose to teach at Banning.

“I wanted to be a little closer to where I lived. I wanted to help students with the socio-economic status that I had as a child and I thought I could best accomplish this at Banning,” McAlpine said.

In addition to being part of ROP, McAlpine is part of Banning High School’s Maritime, Agriculture, Tourism, Cuisine, and Hospitality Academy. The program provides career technical education for students to prepare them for entry-level jobs or post-secondary education in those fields. Students in her classes also have the opportunity to be involved with two culinary-based programs that McAlpine participates in: the Careers Through Culinary Arts Program and the Family, Career and Community Leaders of America program. Both programs have competitions in everything from food art to baking skills that allow students to  demonstrate their culinary skills for scholarships.

Connecting to her students is essential to teaching.

“I’m very involved,” McAlpine said. “I develop a relationship with the families because students who want to go through and compete spend a lot of time with me, so the families have to really trust me and know me. Whatever barrier I have to break through, be it a language barrier or cultural barrier, I break through for my students.”

Since she began teaching at Banning, McAlpine’s students have placed or taken part in these competitions; however, her successes with her students does not blind her to the reality that some parents are hesitant to have their children involved in culinary arts.

“A lot of times what families or your support system will do is say “you have this high GPA,” McAlpine said. “Why don’t you go become a doctor or a lawyer or some other profession? They look at being a chef as a low position, but we know today when we turn on the TV we are looking at celebrity chefs who are making a lot of money.”

However, while there are many positions available for those with culinary experience, the beginning salary is definitely not at the level that these celebrity television chefs make. McAlpine still believes it’s a worthwhile profession.

“Choosing not to go into the culinary world in favor of getting a degree does not guarantee a better salary because getting a degree no longer guarantees that you will get a job,” McAlpine said. “What matters more is where you go with your skills. What you know, what you do with it, and your motivation. If you are self-motivated, then you can succeed no matter the circumstances.”

While many would be hesitant to deal with teenagers, McAlpine credits them with the success of the program.

“Teenagers can be nice,” McAlpine said. “They listen. They want structure. Most of the students that are here want to be here, which is what makes [the program] so good.”

McAlpine’s aptitude at teaching and connecting with students has resulted in many successful cases of students attaining their goals. Perhaps her biggest success story is Franki Bellhouse-Garcia.

“When I first met her, I was scared,” Bellhouse-Garcia said. “She was very intimidating, very upfront. I actually had this fear that kept me from talking to people. Ms. Mac was my living nightmare, so I was [often] quiet in her class. But as I joined her competition, I got to know her more and realized that she is the nicest and kindest woman I’ve ever met. There is nothing she won’t do for her students. She helps every single one even if they do not want to do something with cooking, she will find them something. She’s very smart.”

McAlpine understood that what he needed was someone to support him and inspire him to believe in himself.

“I didn’t have any passions [before discovering cooking],” Bellhouse-Garcia said. “I thought I was just going to end up working at the docks. There were times where I needed practice and didn’t have a stove at home so she gave me a micro oven so that I could stay on top of it. Even when we were done with competitions, she let me keep using it so I could cook at home.”

Not only are McAlpine’s culinary skills influencing her students, but her passion for community is too. The Banning High alumnus plans to use his education to open a noodle restaurant in Wilmington where he can help promote students from Banning High.

“I want to give back to the community just like they gave to me,” Bellhouse-Garcia said.

A Beacon of Light

While winning competitions and recognition is important, McAlpine’s main focus remains her students. Time and time again, McAlpine is able to use her skills to help her students find their way.

“It’s because of my roots that I am able to do what I am doing now,” McAlpine said. “I have very strong convictions about education. I love children and I like to see my children succeed.”

As she approaches another year of educating, McAlpine’s passion has never wavered.

“Her passion for teaching students has not changed at all,” said Banning High School principal Rudy Mendoza. “There is nothing that will stop her drive to give these kids what she thinks they deserve. She has compassion and love for kids. It’s unbelievable. She’s a magnet for these kids.”