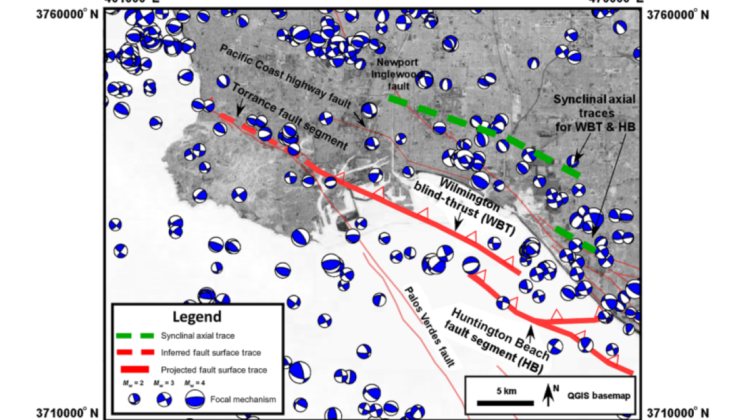 A newly-recognized fault could produce earthquakes as strong as magnitude 7 or higher according to research uncovered by Wilmington activist Jesse Marquez and introduced to the State Lands Commission at its Aug. 23 meeting. He was continuing the decade-plus process of seeking protective action to remove the public safety threat of the Rancho LPG facility, which stores more than 25 million gallons of butane and propane gas, with a blast radius of three miles.

“I discovered something new, something very scary,” he told the commissioners. Marquez was recounting the discovery in the aftermath of the recent Ridgecrest quakes. “It will be devastating.”

The research is fully described in a new paper, The Wilmington Blind-Thrust Fault: An Active Concealed Earthquake Source beneath Los Angeles, California. The fault stretches from Torrance to Huntington Beach passing directly under the two local ports. Its existence has long been known, but it was previously believed to have been inactive for more than two million years, so it’s not included in state-of-the-art earthquake hazard assessments. But the paper presents compelling new evidence that it’s “a tectonically active fault capable of generating large damaging earthquakes.”

“The data indicates that this fault was active, became inactive for a period of time, and it was reactivated within the last 500,000 years,” the paper’s lead author, Franklin Wolfe told Random Lengths News.

“The startling Wilmington Thrust Fault information received last night greatly amplifies the vulnerability of the Harbor Area in its entirety,” said San Pedro activist Janet Gunter, representing San Pedro Peninsula Homeowners United before the State Lands Commission. “Rather than continue to bury this important information, it would behoove this agency, the state, County and the City of Los Angeles to engage in a strategy that begins the process of defusing the massive bomb that currently exists in our region.”

The Nature of the Threat

In thrust faults, opposing walls move up-and-down rather than side-to-side, as in strike-slip faults. A blind-thrust fault doesn’t reach the surface, so they’re usually not recognized until after an earthquake—as happened with the 1987 Whittier Narrows or the 1994 Northridge earthquakes.

“If it were to rupture by itself, there could be a 6.3 to 6.4 [magnitude] earthquake,” Franklin said, but it could easily be stronger rupturing in tandem with other nearby faults.  “What we do in our study is to provide a wide range of possible scenarios of what could possibly happen given the models of the faults that we have mapped.”

With the Torrance and Huntington Beach thrusts both involved as well, the quake magnitude could be 6.8. Beyond that, “If the Compton Thrust and the Newport Inglewood Thrust ruptured in tandem with the system as well, this would be a 7.2 to 7.4,” Wolfe said, though he hastened to say, “The larger the magnitude, the less frequently the event would occur. The more segments [that] are involved, the less frequently it would occur.”

Magnitude alone doesn’t tell the full story, however. The 1933 Long Beach earthquake was centered offshore on the Newport-Inglewood Fault with a 6.4 magnitude, causing 115 to 120 fatalities and $40 million worth of property damage. But it’s at least possible that could be relatively tame.

“The Long Beach earthquake was a strike slip fault, and so the motion is going to potentially give a swaying effect to the buildings,” Wolfe said. “Whereas the Wilmington blind thrust is going to be giving an up-and-down motion, directly beneath the harbor, and it’s my understanding that infrastructure is built to withstand the side-to-side motion, and the swaying, it doesn’t tend to do very well in the up-and-down.”

“Given the fault’s location directly beneath the harbor, and the harbor sitting on unconsolidated soft sediment, the geometry of the fault…where all that energy is going to be localized upward… it’s likely that the fault would cause considerable damage to the sensitive infrastructure.”

This applies to refineries and storage facilities, like Rancho LPG, as well as to the ports which lie directly above the fault.

There’s a lot more research to be done, he noted. It’s possible the Wilmington fault is a splay, or branch, of the Compton fault, he said, and “one of the collaborators on this study, James Dolan, showed in some of his research that there’s multiple greater than magnitude 7 earthquakes that have occurred on this fault within the last, let’s say 10,000 years or so.”

The Northridge quake “could be an analog” for what might happen on the Wilmington Blind-Thrust Fault, Wolfe noted. “It’s a very similar type of fault, it’s located within the sedimentary basin, which may amplify the ground shaking, because soft sediments are easier to deform than the solid bedrock around it.”

How the fault came to light

Typically, faults like the San Andreas are easily identifiable from the air, making them easy to identify and study, Wolfe explained.

“A blind thrust fault is more difficult to study, typically, because the deformation above it is not localized in one place,” he said. “It’s more a distributed folding of the rocks above the fault, because that fault doesn’t actually stick out to the surface.” The Wilmington Blind-Thrust Fault was an exception, identified because of oil companies’ sonic exploration of the area, but it had always been assumed to be inactive, until relatively recently.

Because of where oil can be found, “they were only trying to image from one kilometer down like to four kilometer,” Franklin explained. “The shallowest-most rock that they were able to observe appeared to be moderately planar, compared to the clear folds that we can see in the deeper rocks.”

“It appeared that the fault had been active to fold the rocks to create the Wilmington anticline [the associated ridge-shaped fold of stratified rocks], but then at some time within the Pliocene

, the fault shut off and horizontal planar rocks were deposited, on top of that fold.”

But there was more to the story.

“Most recently, the United States Geologic Survey became very interested in trying to define the geometry of the shallowest most rocks that it has never been studied before,” Wolfe said. They used high-resolution seismic imaging, drilled new water wells and analyzed water data in order to understand the groundwater architecture and resources in the Los Angeles region.

The new data revealed signs of folding in the more recent rock layers, which could indicate reactivation of the fault, though other explanations were possible as well. The possibility was first raised about a decade ago, but conclusive evidence has only just now been published.

LA area faults as a whole

As already noted, there are multiple blind-thrust faults in the L.A. region. The Northridge Blind-Thrust Fault was only discovered because of the 1994 Northridge quake, a 6.7 magnitude quake felt as far away as Las Vegas. The Puente Hills Blind-Thrust Fault was identified in 1999 as a trio of fault segments stretching from Puente Hills near Whittier, through downtown Los Angeles to Dodger Stadium, before turning west toward Beverly Hills. While the 1987 Whittier Narrows quake first indicated its existence, the full extent wasn’t known for another 12 years.

All these faults are products of long-term movements along the San Andreas Fault, where the Pacific and North American tectonic plates meet. As a result of these movements in the Miocene [5.3 to 23 million years ago] “there were normal faults that were forming” in and around the LA Basin, including off-shore, Wolfe said. “They were being stretched and extended, due to the relative motions of these two tectonic plates.”

But during the Pliocene, which followed the Miocene, “the motion on all of these faults seems to have reversed,” he said. “So within the last four million years or so, it seems like contraction in the L.A. basin has been ongoing,” and as a result of this the change “from extension pulling the crust apart to contraction … thrust faults started forming during this time, and have been active until the present day.”

This unified picture of the local fault systems helps us better grasp the nature of the threats we face. But there’s one thing more Wolfe pointed out. After the 1987 Whittier Narrows earthquake, he said, “Legislation was put in place to not allow people to build structures right on top of fall traces.” But since then, “the identification of blind thrust faults and their unique hazards in the region” indicates that “a different way of thinking about seismic hazard is required.”

That’s precisely what Jesse Marquez and Janet Gunter were asking for from the State Lands Commission.

Four years after the Puente Hills Blind-Thrust Fault was discovered, seismologist Sue Hough told the Los Angeles Times, “This is the fault that could eat L.A.,” With this new discovery, the Wilmington Blind-Thrust Fault could do the same to the Harbor Area.