A Primer on American Labor His... 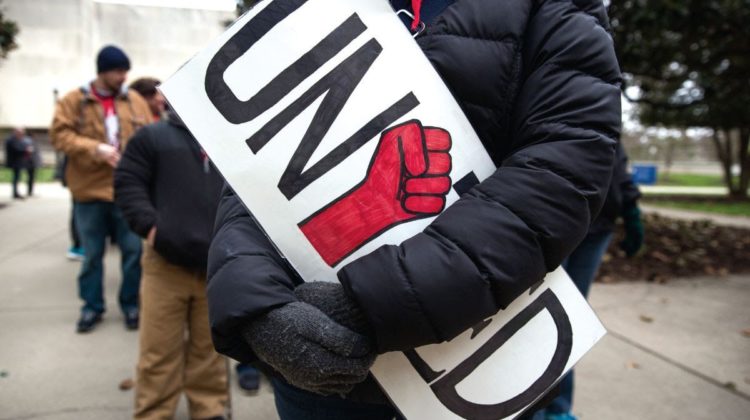 On Aug. 6, New York Times labor reporter Steven Greenhouse released Beaten Down, Worked Up: The Past, Present, and Future of American Labor, an in-depth look at working people in America and the challenges they face and how they can be re-empowered.

America has seen a decades-long decline in worker power. In a time of soaring corporate profits, anemic wages and blighted blue collar communities, the deterioration of workers power is barely discussed. Arguably, one to two generations have not fully seen the collective power that unions bring to people and don’t realize the influence they possess as workers. But some do realize it. From striking teachers to fast food employees fighting for $15 per hour pay, many workers recognize the need to take that power back.

Beaten Down, Worked Up tells the history of labor unions and worker power in America by focusing on pivotal moments that built the labor movement that gave workers a true voice and power, which lifted wages and benefits for millions of Americans. Beaten Up shouldn’t be taken as a comprehensive history. But it is certainly an excellent primer.

Greenhouse dedicated a chapter to the work of Los Angeles Alliance for a New Economy, or LAANE, a nationally recognized advocacy organization. The chapter is titled How Los Angeles Became Pro-Labor. It’s a deep look into how now-Sen. Maria Elena Durazo and her deceased husband Miguel Contreras, along with Madeline Janice, activist and director of the Central American Refugee Center started LAANE soon after the 1992 Los Angeles rebellion.

From its start LAANE provided a model for other cities with far-reaching worker empowering initiatives, helping more than 120,000 workers. LAANE has achieved some 50 major initiatives for the community and for the empowerment of Los Angeles workers in the past 25 years.

Two of LAANE’s successes include the enactment of living wage laws in the fight for the $15 per hour minimum wage in 2015 and the founding of the pioneering labor-environmental coalition that cut truck pollution by 90 percent at the ports of Los Angeles and Long Beach.

The following is an excerpt from  the latter half of How Los Angeles Became Pro-Labor. In it, Greenhouse describes LAANE’s transformation from a labor-adjunct organization to one that works closely with community and environmental groups:

Of all the worker advocacy groups in the nation, LAANE has been the most effective in allying itself with green groups to help both workers and the environment. For example, in 2005, trucks rumbled each day into the neighboring Ports of Los Angeles and Long Beach — together the nation’s largest seaport — often waiting hours to pick up goods, spewing diesel particulates and befouling neighboring communities. Angry residents and environmentalists demanded that the ports require a new generation of cleaner trucks that would cut pollution by 90 percent. All these new trucks would cost nearly $2 billion, and it was unclear who would pay for them.

LAANE joined with environmental groups to analyze the situation. Most port truck drivers couldn’t afford the more than $100,000 to buy new-generation trucks. Eighty-eight percent of the drivers were independent contractors, and although they grossed $75,000 a year on average, they netted just $29,000 after factoring in fuel, insurance, and other costs. Their pay averaged just $12 an hour.

LAANE, with strong support with L.A.’s then-mayor, Antonio Villaraigosa, teamed up with environmental groups to develop a  clean air plan that the two ports adopted in 2008. The ports required that within five years only new-generation trucks could be used. The ports levied a supplemental $35 fee on each shipping container to create a fund that provided loans and subsidies that helped companies and drivers buy new trucks. In addition, the Port of Los Angeles required trucking companies to treat their drivers as employees, not independent contractors. This meant that the trucking companies would have to pay for overtime and cover many of the truckers’ costs, including fuel and insurance. It also enabled the truckers to unionize.

By 2013, truck pollution at the ports had dropped by 90 percent. But a federal appeals court ruled that the Port of Los Angeles couldn’t require trucking companies to treat their drivers as employees — a huge blow to many drivers, who once again found themselves as low-paid independent contractors. As employees, many were earning enough to pay down the debt on their new trucks, but as contractors many were soon in default. LAANE and several lawyers gathered and presented evidence that convinced California Labor Commissioner Julie Su to rule that trucking companies had been illegally misclassifying more than 1,500 drivers as independent contractors. Those rulings increased those drivers’ pay and bargaining power (although the labor commissioner’s ruling didn’t cover all trucking companies and drivers).

As innovative as this port trucking effort was, LAANE’s campaign to improve L.A.’s waste-hauling industry was arguably more imaginative. In 2011, city officials were alarmed that the main garbage landfill in L.A. was fast approaching capacity. They were also upset that the private-sector waste haulers, who collected 77 percent of the city’s refuse from businesses and multifamily buildings, recycled merely one-fifth of what they collected. … At the time, the city’s 125 trash haulers won contracts by submitting the lowest bid (and often paying dismal wages).

After nearly two years of studying the chaotic industry, LAANE and its environmental allies put forward a far-reaching plan to bring order. Their plan called for dividing L.A. into 11 zones, with an exclusive waste-hauling franchise awarded for each zone through competitive bidding. To win a ten-year franchise, companies would have to pledge to use clean trucks, recycle a high percentage of trash, pay a living wage, assure safe working conditions, and promise not to oppose unionization. The plan was called Don’t Waste L.A.

Before going public with the plan, LAANE published a 26-page research report that examined the waste industry’s problems. “You can’t come into city hall with a half-baked idea and hope to succeed,” [Greg] Good said. For months, he and Adrian Martinez, a lawyer with the Natural Resources Defense Council, attended meetings in dozens of California communities to learn how their trash collection systems worked. “If you want to get something done, LAANE is the go-to group,” Martinez said. “They’re successful because they find areas where environmental and community groups can really align with them on environmental matters and on unjust practices that harm workers.”

Like Madeline Janice, her predecessor, Roxana Tynan, the executive director of LAANE, is a strategizer, a mobilizer and knows how to build alliances. Tynan pushes boundaries and writes smart well researched reports. She is said to have little patience for those who dismiss LAANE as leftists seeking to tear down capitalism. The organization has the support of business and developers work with them. Tynan said they have a fundamentally “pro-growth” agenda. Her message for worker advocates and their progressive allies is that one can only build power from the bottom.

“Our real message is that power gets built in place and gets built through long-standing coalitions and through leadership development,” Tynan said. “We just want to ensure that all boats are rising.”

The book can be purchased at: https://tinyurl.com/Beaten-Up-Worked-Up.