This is US: the Gig Economy 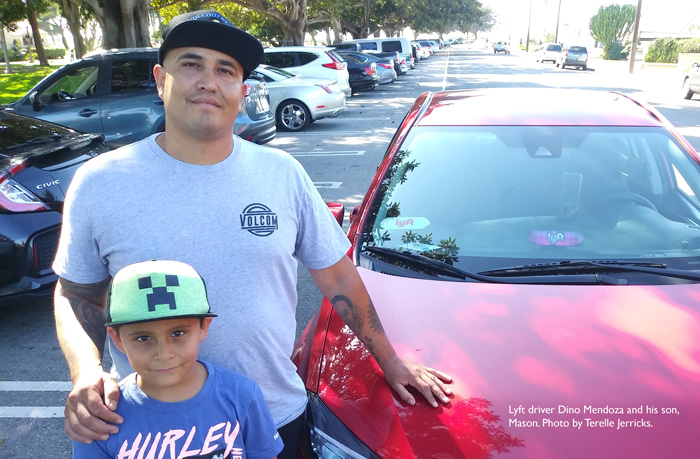 This is US: the Gig Economy

Many drivers aren’t sure what would happen if California lawmakers pass Assembly Bill 5, a bill that would codify into law the existing landmark legal ruling, Dynamex Operations West, Inc. v. Superior Court of Los Angeles, which would make it harder for companies to classify a worker as a contractor rather than an employee. It’s been reported that some drivers are worried that they would be forced to choose to work for only one app, either Uber or Lyft. Others feared that they would be forced to work a minimum number of hours, thereby taking away the work flexibility that had lured them to Uber or Lyft in the first place. “I don’t know how I feel about Lyft stealing my time, because at the end of the day, it’s up to me,” Dino Mendoza said.

As a 34-year-old Lyft driver, Mendoza also has mixed feelings about the legislation intended to help gig economy workers.

He’s seen the same emails and in-app messages as his colleagues of Lyft exhorting them to write their legislators to protect their work flexibility. Mendoza says the emails are buried somewhere deep in his inbox.

He said working for Lyft is bittersweet.

“The bitter part is that I feel like Lyft is stealing my time from my son,” Mendoza said. “He’s 8-years-old. These are considered his wonder years.”

Mendoza is a divorced father. He rents a room in San Pedro for $1,000 a month and pays $500 a month in daycare expenses for his young son, Mason. He’s been looking for an affordable place to live in the Los Angeles Harbor Area for the past several months with no luck. “The cost of living is so high that Lyft makes it possible to work when I can, but it takes a lot of time away from my son. Unfortunately, it has to be done to survive,” he said.

A typical workday for Mendoza looks like the following:

Mendoza says he tries to be in bed by midnight so that he can wake up fresh at 5 a.m. to do it all over again.

On weekends, his son is with his ex-wife, which allows him to work more hours.

“You just need to know when to drive [in order to get what you want out Lyft].” Mendoza said, reporting that the least he has earned driving for Lyft was $60 for four hours of work, or $15 an hour. But he regularly earns $25 or more an hour.

Before Lyft and Uber (Mendoza once worked for Uber) started pulling back on compensation to drivers, Mendoza said  he could easily earn $1,800 in a week — not so any more.

Mendoza admits that the cost-benefit analysis gets more complicated when he considers the out-of-pocket costs of working for Lyft — tax write-offs or not. In an average week in which he earns $1,200 he estimates that he keeps $500.

“It’s stressful working for Lyft,” he said. “People treat your personal vehicle like a taxi or public transportation.”

Mendoza said that if he didn’t clear out the empty liquor bottles, drugs and drug paraphernalia from his back seat,  he could wind up in the cross hairs of law enforcement or worse, his son could be harmed by the materials.

AB-5 does not directly address work flexibility or working for more than one app company at a time. Technically, companies could provide as much or as little flexibility in scheduling employees’ working hours as they want.

However, ride-sharing companies have argued that when companies are obligated to provide the financial overhead that comes with employment, they are motivated to exert more control over their workforce.

“Virtually all employers require their workers to have scheduled shifts, and there is not a single example of a company that offers employees the level of flexibility that Lyft drivers enjoy,” a spokesperson for Lyft said in a released statement to the technology news website, Recode.

Some labor experts have dismissed the companies’ reasoning, saying there’s no reason why employees couldn’t be granted the same flexibility they have today as contractors. The garment industry is but one example.

But classifying workers as employees would, by ride-share executives’ own admission, pose a risk to their business. According to a recent Barclays estimate, reclassifying employees would cost Uber and Lyft about $3,625 a driver, which could amount to several hundreds of millions in annual operating losses per year. That’s a substantial loss for two companies that are still struggling to turn a profit.