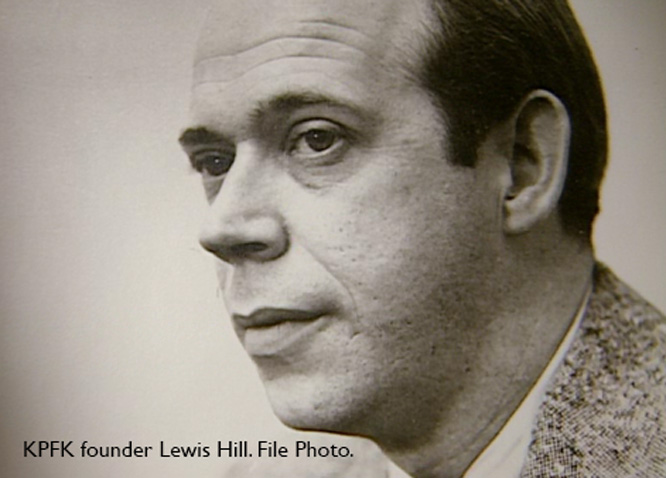 KPFK-90.7 FM at 60: Milestones on the Path of Progressive Radio

KPFK (90.7 FM) is a listener-sponsored radio station based in North Hollywood, which serves all of Southern California, and also streams 24 hours a day via the internet. It was the second of five stations in the non-commercial, listener-sponsored Pacifica Foundation network.

With its 110,000-watt main transmitter atop Mount Wilson, KPFK is one of the most powerful FM stations in the western United States. The station can be heard from the California/Mexico border to Santa Barbara to Ridgecrest/China Lake. A second 10-watt translator is licensed in Isla Vista, a census-designated place outside Santa Barbara. The transmitter for that station is located atop Gibraltar Peak, allowing its broadcast to be heard over a large portion of southern Santa Barbara County.

Lewis Hill  was a co-founder of KPFA , the first listener-supported radio station in the United States, and the Pacifica Radio network.

Hill  was born in Kansas City, Kansas on May 1, 1919. His father was an attorney who made his fortune by brokering a deal to sell an oil company to J.P. Morgan. His mother’s brother was Frank Phillips, builder of Phillips Petroleum. Hill was sent to Wentworth Military Academy in Lexington, Missouri because he was too bright for the public school. According to his widow, he “despised” his time at military school, but he completed his first two years of college there and also was the Missouri State doubles tennis champion. He then transferred to Stanford University.

While studying at Stanford in 1937, his interest in Quakerism led him to a belief in pacifism. As a conscientious objector, Hill served in Civilian Public Service during World War II. In 1945, Hill resigned from his job as a Washington D.C. correspondent and moved to Berkeley, California.

To see the schedule of regular programming and special events broadcasted on KPFK-90.7 FM, visit kpfk.org.