When Perry Mason Comes to Town... 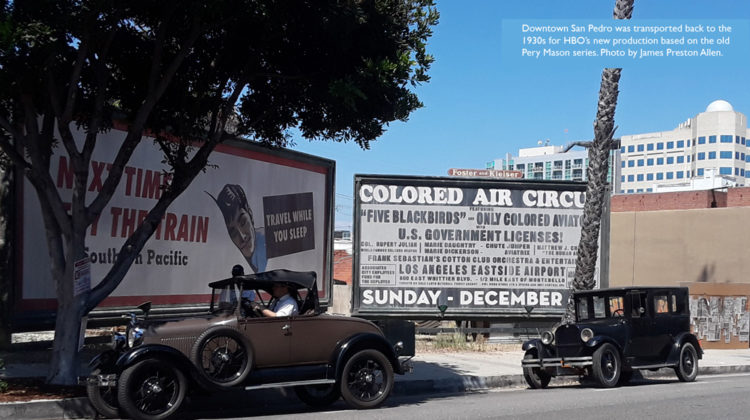 When Perry Mason Comes to Town

In the middle of August, San Pedro was the site for the filming of HBO’s prequel to the 1960s hit, Perry Mason, a limited series that follows the origins of American fiction’s legendary criminal defense lawyer. The series is set in Los Angeles circa 1932 and at least part of the backdrop used on Seventh street was made to look like South Central Los Angeles.

While most of the country was struggling to climb out of the Great Depression, the city of Angels was preparing for the Olympic Games, oil wells were being drilled in every direction and the nascent “Talking Pictures” industry was starting to take root in Hollywood which ushered in the golden age of film and television.

In more ways than one, this was also a period of transition, including huge migrations out of the Oklahoma Dust Bowl and the South, the emergence of new ideas pushing against long held prejudices, changing religious beliefs and new ways of living. During this period stories abound of everyday people selling all of their earthly possessions to charismatic religious leaders – not unusual given the explosion of storefront churches in big cities that were feeding the apparent hunger for meaning in this period of change, growth, urbanization and segregation.

It is against this backdrop that Perry Mason emerges in the new miniseries based on the short stories and novels of detective fiction writer Erle Stanley Gardner, who was a lawyer. The new series is being written by Rolin Jones and Ron Fitzgerald, who last worked together on the film, The Knifemen, and Matthew Rhys, who gained acclaim in The Americans, is to star in the title role.

In this prequel to the original Perry Mason television series, Mason is living check-to-check as a low-rent private investigator. In this period of his life, he is haunted by his wartime experiences in France and suffering the effects of a broken marriage, when he lands a kidnapping gone wrong case that leads to him exposing a fractured city as he uncovers the truth of the crime.  Strangely enough the plot sounds quite contemporary.

Perry Mason’s back story is a curious vantage point to view Los Angeles in the 1930s, a boomtown in the era of the Great Depression segregated, racist and corrupt. It was a place where migrants flocked to escape the dust bowl or the Jim Crow South and the police force was sent to the border of California to stop them from invading the Golden State. Does this sound familiar to recent events at the southern border?

The show was groundbreaking as a police procedural. Shows such as Matlock, Columbo, Murder She Wrote, the long running Law and Order and the CSI franchise, How to Get Away With Murder owe a debt to Perry Mason.

Part of the fascination of watching Perry Mason reruns was identifying or guessing what parts of 1950s-60s Los Angeles was being featured in any given episode, whether it was downtown Los Angeles, Wilshire Boulevard or the docks in San Pedro. Watching these reruns is like tapping into a collective consciousness that feature all things Los Angeles in that particular moment.

At the end of every episode, Perry got his client off the hook by finding some new piece of evidence that pointed the finger someone else and who often dramatically confessed on the witness stand. Black people, let alone other persons of color were disallowed from serving on juries involving white defendants until 1935 when  the United States Supreme Court ruled in Powell v. Alabama (1935) that criminal defendants are entitled to effective counsel and in Norris v. Alabama (1935) blacks may not be excluded systematically from jury service. But this did not stop prosecutors from eliminating black jurors through the use of peremptory challenges. Or from them not being represented in TV juries.

Nevertheless, the Perry Mason television show offered the vision that justice was possible but not often practiced, in the American legal system. The Perry Mason reboot goes a step further by recasting Paul Drake into a black police officer with a knack for detective work. This development of the character is not outside the realm of possibility in the 1930s, since there were black police officers who worked on cases in black parts of Los Angeles.

Passion for justice, love for the law and superior powers of deductive reasoning is the basis of Perry Mason’s genius. Although none of the syndicated reruns featured people of color and faith and creed were never portrayed as determinants in guilt or innocence — this is a reality that most people who were alive then would not have found foreign.

We just might wonder what if Cyntoia Brown, the woman who was  released from prison after having her sentence for murder and robbery commuted to 15 years this past month, had Perry Mason as her lawyer?

Brown, at the age of 16, was convicted of the murder and robbery of Johnny Michael Allen. Brown said that Allen had paid her $150 to have sex with him and that she feared for her life during their encounter, leading her to shoot him. Prosecutors argued that Brown killed Allen in order to rob him. Brown was found guilty and sentenced to 51 years to life. After renewed interest in her case in 2018, the governor of Tennessee commuted her original sentence to 15 years. She was released earlier this month.

Before her arrest for Allen’s murder, Brown had become a runaway teen after spending time in her state’s Department of Children’s Services between April 2001 and September 2003. She was a sex trafficking victim who fell between the cracks of the social safety net. If Brown had Perry Mason as her lawyer, or if she lived in his fictional universe, she might never have been convicted as he would have argued self defense. Such was not the case nor is it often in the way justice rarely is blind.

Just who was Erle Stanley Garner?

Gardner was born in Malden, Mass. in 1889 before he relocated to the West Coast with his family at the age of ten. Encouraged by his father to take up the law, he passed the bar at the age of 21 and settled in Oxnard, California where he became known for his spirited and creative defense of the Chinese community. His notoriety came to the attention of H.F. Orr who, in 1915, recruited Gardner to join his law firm, known today as Benton, Orr, Duval and Buckingham.

By the 1920s Gardner was spending more and more time on his second career, writing short stories for pulp magazines. Many of these tales featured plots revolving around legal problems and obscure laws.

In 1933 Gardner published his first novel:  The Case of the Velvet Claw, featuring something previously unknown to detective fiction at the time: a crime-solving lawyer. The novel’s protagonist, Perry Mason, became an instant hit and was made into a feature film of the same name in 1936. Perry Mason became a recurring character in Hollywood films through the rest of the 1930s, after Gardner left the law firm to write full time.

With the success of the Mason series, Gardner gradually reduced his contributions to the pulp magazines until the medium itself died in the 1950s. Gardner published a few short stories in Collier’s, Sports Afield and Look magazines but most of his postwar contributions were nonfiction articles on travel, Western history and forensic science.

Gardner and his first wife had separated in the early 1930s, and after her death in 1968, Gardner married Agnes Jean Bethell (1902–2002), his secretary since 1930. Perry Mason’s fictional secretary Della Street, was a composite of Jean and her two sisters, Peggy and Ruth, who also worked as secretaries for Gardner.

Gardner, last major project was the dramatized court television show, The Court of Last Resort, the concept of which was taken from his true-crime column and Edgar Award-winning 1952 book of the same name.

The Court of Last Resort sought to review, and when appropriate, reverse miscarriages of justice against criminal defendants who had been convicted because of poor legal representation, abuse, misinterpretation of forensic evidence or careless or malicious actions of police and prosecutors. The author collaborated extensively with his many friends in the forensic, legal, and investigative communities to ensure his work was on firm footing.

Gardner’s body of work as a lawyer and a writer likely inspired an untold number of people to become police officers, lawyers, and judges with the uncynical belief that the wheels of justice turns slowly, but grind exceedingly fine.