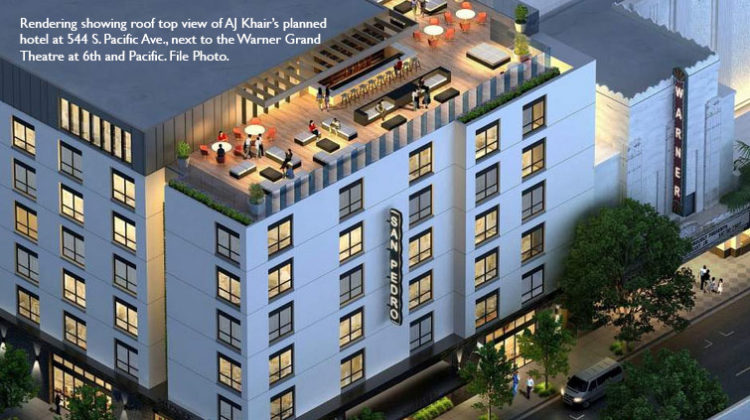 On Aug. 6 the Harbor Area Planning Commission unanimously approved a request from 544 Pacific LLC to build a hotel with 80 guest rooms on the corner of South Pacific Avenue and 6th Street, adjacent to the Warner Grand Theatre. This reversed the decision of the planning administrator.

Theodore Irving, the associate zoning administrator, previously approved 544 Pacific LLC’s permit to build the hotel, with the caveat that the company could build it with just 67 rooms instead of the requested 80.

“While the building would not be any larger with the added rooms, it would be too dense according to the municipal code,” Irving said. “The denial was a denial of the request for a zoning administrative adjustment,” Irving said. “Typically the zoning administrative adjustment is used to allow a mediation or a relief from the strict application of the municipal code in order to make a project more whole when the code itself, when it’s strictly applied, takes something away and does not allow them to have something fully.”

Irving noted that the site area allows 67 guest rooms and there’s nothing unusual about its configuration. “The request to obtain extra density is a request for additional benefits to the site,” he said. “ And these are benefits that people who comply with the code will not enjoy.”

“This is the area where we need this density, to drive more revenue to this area, to get more visitors to this area,” Kallick said.

The hotel is designed to have a restaurant on the ground floor and a rooftop bar, Kallick said. It will be seven stories tall and will have one level of underground parking. It will have a neon sign that says “San Pedro” designed like the sign on the Warner Grand Theatre.

Javier Gonzalez, a member of Central San Pedro Neighborhood Council’s land use planning and public works committee, said that he believed the project had the potential to be part of the renewal of downtown San Pedro.

“It will benefit the businesses in downtown, it will also benefit our local economy by bringing more tourism, something that is desperately needed,” Gonzalez said.

The Northwest San Pedro Neighborhood Council wrote a letter in support of the project, and Diana Nave, chairwoman of the neighborhood council’s Planning and Land Use Committee, read a portion of it at the meeting.

“This is a hotel, it’s a commercial project, it’s not multi-family housing,” Nave said. “When we talked about density for this area’s part of the plan, we were assuming we were talking about residential density. [We] never considered that this would then be applied to a hotel.”

Irving said  he is not disappointed with the board’s decision, but believes it undermines the law.

Robin Rudisill said it sets an unhealthy precedent that other projects will expect the same special treatment.

Noel Gould of the Coastal San Pedro Neighborhood Council said the developers should add more parking spaces. The hotel will be parked to code with 62 parking spaces and 20 bike spaces, but Gould said this will flood the streets with people looking for parking.

Scott Greenspan, vice president of 544 Pacific LLC, said that if they were unable to build the hotel with the full 80 units, they would have to take into serious consideration whether they would go through with the project.