The Ever Changing Tastes of Wo... 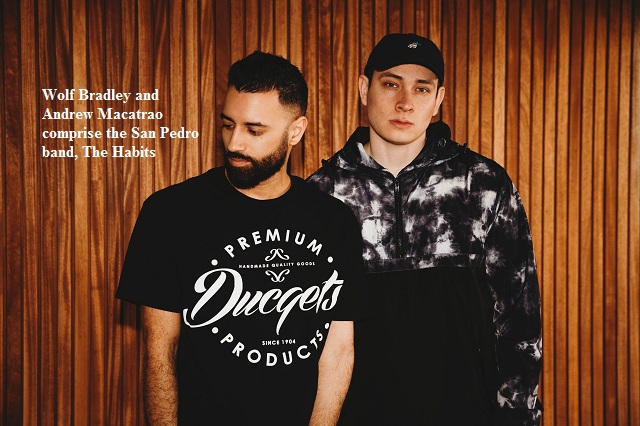 The Ever Changing Tastes of Wolf Bradley

The Harbor Area has always been home to underground artistry. San Pedro’s pop group The Habits is one example of the underground talent in the community.

I first heard about The Habits while working as a cashier at a local grocery store.

Late into a shift a customer came to pick up a cake. Being as bored as I was, I asked if they were celebrating someone’s birthday.

“Nah, my friend’s band just got their first single released to Spotify,” she replied.

I asked the band’s name during my break and I took a quick listen. Instantly, I was a fan. Just by fate, my girlfriend knew the lead singer. I messaged him and was able to go to their next show.

Millennial crowds usually get a bad rap for being on their phones the whole time at a show, but that wasn’t the case at this concert. It really seemed like everyone was deeply connected to the band. When Wolf Bradley, the lead singer, came on stage he was met with an uproar and about everyone in the crowd was singing along until the very end. The songs performed live had the same vibe as they have on tape. Granted, this is because a lot of the instrumentation is taped, only leaving the guitar and drum parts to be played live.

Their music is a modernized version of late ‘90s or 2000s pop with some garage band influence. Think 21 Pilots, Yungblud and maybe the White Stripes. These bands all have one thing in common: They tightrope on the line between alternative and mainstream appeal, which this band accomplishes. This is a contrast from Bradley’s previous influences, which were very pop-punk based. Their self-titled EP that just released this past June is a good example of their music: bouncy and energetic. Their lead single from the EP, Love You, is more or less a love song, but the instrumentation is what really gives it its diversity, with summer-y guitar licks and varied percussion.

Bradley talks about how the Harbor Area has been an influence in his music.

“I feel like everyone here has like a, ‘Fuck it! We do what we wanna do’ attitude,” he said. “I feel like we carry that attitude with us because we don’t really fit in with the scene here.”

The band’s song Callin’ You Up, recalling the struggles of a past relationship, is up to about 150,000 listens on Spotify — a staggering number for a local band.

“These aren’t just some catchy pop songs,” Bradley said. “There’s also a lot of meaning behind them …we try and make something everyone can relate to.”

The seasoned group members, Bradley and Andrew Macatrao, are making their way up ever so steadily. Bradley and Macatrao met 12 years ago, while they were attending the San Pedro Ballet School on 13th Street and Pacific Avenue.

The two weren’t always super close but their friendship grew over time. Bradley recalls various times when Macatrao would cancel when they were supposed to hang out. “I’d order a movie, some pizza, but [he] cancelled last minute.” Over time though the two got closer as they started practicing music more.

After Wolf got his first guitar at 14, the two would just casually make music within their parents’ homes and eventually got the courage to start taking it seriously. By 16, the two were established and almost done recording their first few singles. Some of their earliest band names include The Ballerhinos, Last Day Off, and 20 Eyes, before settling on The Habits. Their reason?

The group went through a big change over the past year as their pianist left to pursue his own thing. This isn’t unique to the band as they went through numerous transformations in their lifespan.

“People come and go, you can’t really help that,” Bradley said. “We know we want to do this as a living, so we just do what we can with what we have.”

The Harbor Area music scene is dominated by punk but this hasn’t caused any difficulties when winning over crowds.

“As long as we win a few people over, that’s a win in our book,” he laughed.

The band has plans for the future already, looking to release another song just before summer ends.

“I can’t really describe what it feels like to go up on stage, just connecting with people on another level is an entirely different experience,” said Bradley about finding the energy to keep going.

The Habits are just one story out of dozens of artists in the area. You can always find The Habits, as well as other bands, at your local open mic nights or venue. Bradley and Macatrao hope to eventually make a living off of music, and see a bright future for themselves.

The Habits are available on Apple Music, Spotify and SoundCloud.Check them out at https://tinyurl.com/TheHabits-Calling-You-Up