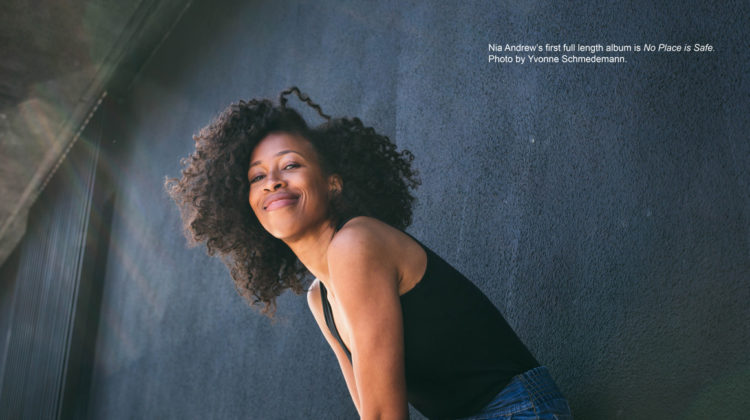 Nia Andrews calls herself a storyteller and a polymath, which she described as “A person who wears many hats fully.”

After listening to her first full-length album, No Place Is Safe, I see why. She unveiled her talents as a multi-instrumentalist, songwriter, music arranger and producer to name a few. On this magnum opus, she wore every hat with few collaborators.

RLn recently spoke to Andrews about her process and exactly what is behind that title.

“Come on, there’s got to be another name,” Andrews said describing her reaction to the title. “Is this what I’m gonna call it? Nothing else felt right.’”

Recounting the process of naming the new album she described the first two years under Trump seeming as if the world was falling apart. Truth be told, it still feels like that. Children are separated from their parents and locked in cages, immigrants, even those seeking asylum now, are turned away instead of welcomed, gun violence keeps happening as if it’s accelerating and the man in the White House stokes the fires of racism and division.

This is a time in history when Andrews said she doesn’t want to be a bystander and she wondered, what does one do to be an ally or advocate instead of being a bystander while injustice is happening and also maintain your center and “not lose your damn mind.”

“Just before people were freaking out about the [presidential] election, it [was] an unprecedented time of having so many black people being killed at the hands of the police — and being recorded [with] police getting off,” Andrews said. “It kept happening. … It almost seemed like the election was a distraction from that because it was just such a call for alarm.”

No Place Is Safe exemplifies Andrews’ consciousness and her personal growth as her talents shine on its beautiful arrangements. But the work is not subtle, it’s strong. The instrumentation draws one in. Intro’s recurrent Rhodes piano scales expand and contract like soothing breath work. Poignant violin with piano on Cleo and the King creates a cinematic story in roles of “perfectly casted love.” The Ceiling merges angst and humor while trying to cope with an overdue lover.  It’s gospel spirit meets nocturnal anxiety producing revelrous grooves with hand claps, violin, viola, piano, keys, bass and percussion.

Though Andrews grew up around music and musicians, in some ways, No Place Is Safe is also about her internal struggle as an artist. She struggled with shyness and being in the public eye versus the needs of artists to realize their expressions.  At one time she quit music, making a complete pivot into film. As a fellow in the Project Involve program for screenwriting, she worked for a director doing all of his treatments, [pitching concepts to be sold], while also writing screenplays. Andrews recounted her experience of being in a creative environment and exchanging ideas without fear that someone was going to steal and profit from them.

Of note is Andrews’ writing talent. In fact, No Place Is Safe is a collection from a creative exercise in which she wrote one song a day for a few months. Andrews has said she writes to capture a mood that leads deeper into herself.  It’s why she stays connected to her spirituality through meditation and prayer. As a result, Andrews’ writing process allows for memories and forgotten experiences — experiences she’s still processing to emerge.

Andrews sings to herself often and much of that is toning, a “sound healing practice” and tool for her. When she looks for something, people often point out that she is singing. She does it for herself saying she has felt outed by this observation in terms of her artistry. It was the rapper, Common, who got Andrews, his then-creative assistant, to come out and sing The Light in public at his show.

“It was one of those times in my coming of age where I needed a sign,” she said. “I wasn’t sure where I was going. And I think it was

that day when Common asked me to sing.”

More than a decade from that pivotal day on stage by way of Common, she still grapples with stage fright.

“I’m pouring out my heart and soul because my music is very personal,” she said.

It’s an interesting juxtaposition between Andrews’ free, happy and peaceful demeanor and some of her intense, in-depth lyrics. But she has always been unafraid to go into the depths.

“To say I’m a singer just doesn’t tell a story of who I am because I’m so many things,” Andrews said. “We’re all so nuanced. I sure as hell am … a total polymath [doing] so many things. I tell stories … through various mediums and modalities and sonically I have a lot of tools. My voice is one of them, the pen is another, instrumentation is another. How those instruments come together, how they’re arranged and produced, it’s all a story to me.”