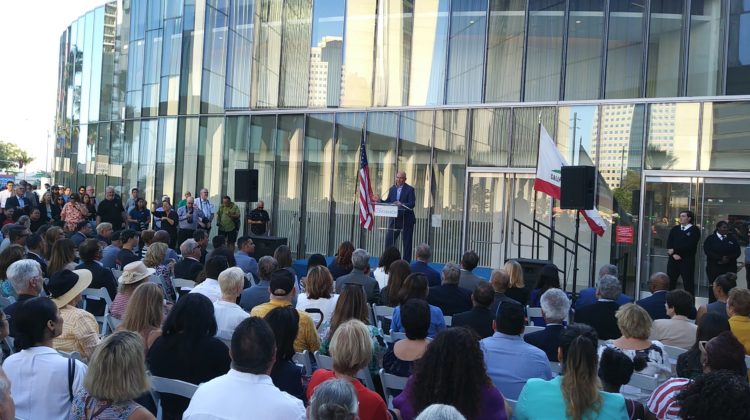 Long Beach hosted the grand opening of its new civic center and city hall in downtown July 29. A crowd of about 600 people showed up to the new town square to hear speakers and see the new complex.

The civic center houses several new municipal facilities. It includes a new city hall, new meeting facilities for the city council, the main new public library to be named for tennis icon Billie Jean King, opening in September, an administration building for the Port of Long Beach and a renewed Lincoln Park.

The complex is part of a multi-year, almost $1 billion transformation of the Long Beach Civic Center by a public-private partnership, which provides Long Beach with new municipal facilities in exchange for private developers gaining access to build housing, retail facilities and public amenities on the old civic-center land.

This project is notable in that it’s the largest public-private development of its kind on the West Coast and is expected to serve as a model for other cities in the United States. Private real estate developers agreed to build public buildings and a city park in exchange for land where they will build their own profit-making apartments, condominiums and stores.

Below are details about the new complex

First and second-floor operations will both utilize a new queuing system to provide a more streamlined service experience.