Bernie and the Daughters of th... 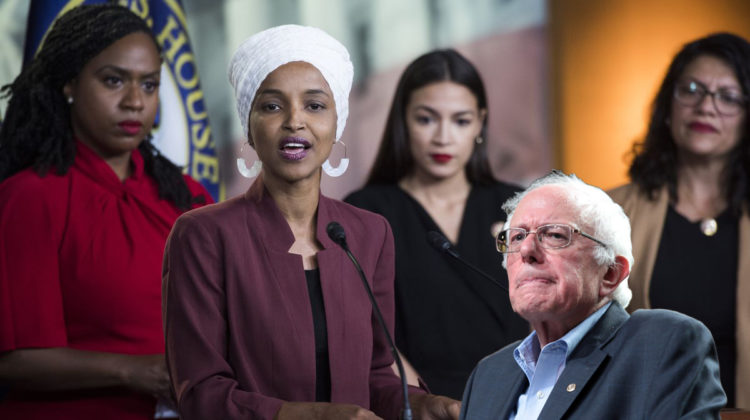 Bernie and the Daughters of the New American Revolution

As much as the mainstream media and the conservative side of the Democratic Party try to deny it, Sen. Bernie Sanders has redefined the platform on which the party and the top 10 primary candidates are running —from health care and drug prices to education and global warming, and once again, gun control. With a rash of mass shootings and scorching heat waves burning up middle America, climate change deniers and NRA supporters will have a much harder time denying Sanders and a cadre of young progressive women in congress.

NBC’s Meet the Press host, Chuck Todd, confronted Sanders with, “Why haven’t you changed your message?” Bernie’s response was, “Because nothing has changed.” Indeed, not only has nothing changed, but things have clearly gotten much worse since 2016. With the immigration crisis at the southern border and the progressive “squad” calling Trump’s detention centers “concentration camps” there is yet another media battle afoot.

Rep. Alexandria Ocasio-Cortez is emblematic of the young leadership I have been waiting for since the end of the Vietnam War. She and fellow fresh-women representatives in Congress, Rashida Tlaib, Ilhan Omar, Ayanna Pressley (aka “The Squad”), and Katie Porter are what the boomer generation have wished for: progressive, passionate, fearless and honest. They are, indeed, the promise of the future in the present. They are the political equivalent of the USA women’s soccer team: smart, confident and bold.

If Bernie Sanders is the father of this “New American Revolution,” these women are the “New Daughters” of it, except they won’t be staying home and sewing Betsy Ross flags or baking cherry pies. These women are not demurring to their senior counterparts who have forfeited the fight and whose principles are compromised. And for this they deserve the respect of every true American patriot in this nation who still believes that certain truths are self evident, that all people are created equal, that we are all endowed with certain unalienable rights.

I remember well the cautious arguments of compromise over idealism and pragmatism versus polemics from 50 years ago. Both brought us the mission to the moon as success AND an unsustainable defeat in Southeast Asia that still haunts this nation today. One still has to question the wisdom of fighting that war that was brought on by the rationalizations of the  “best and brightest minds” of that generation, as well as the lies and deceits of two administrations.

Today, like long ago, Trump’s attacks on his adversaries are all too much like Nixon’s disdain for the press with a huge helping of racist George Wallace thrown in. Singling out the “squad” and calling them a “racist group of troublemakers who are young, inexperienced and not very smart,” is a sad defense for a man who is conniving but not wise and who has absolutely no historical context or moral grounding to guide him. Too often, Trump accuses his opposition of the very things of which he, himself, is guilty — racism, inexperience and stupidity. Donald J. Trump is the personification of the tyrant that the founding fathers warned us about and it’s damn well time all of our elected officials in Congress speak out boldly and passionately in defense of all our rights and against this tyrant.

You will notice once again that the Tweeter-in-Chief always causes an uproar in the media the closer an investigation gets to revealing his taxes, what Robert Mueller actually meant in his report or when another one of his buddies gets indicted. Recently, he threatened to go to war with Iran when these things got too close. Then Trump starts calling people names, trying to sow discord and confusion. He recently tweeted, “They are pulling the once great Democrat Party far left, and were against humanitarian aid at the Border … And are now against ICE and Homeland Security. So bad for our Country!”

Trump regularly labels his political opponents in Congress as “socialist” or anti-American, people who actually take their oaths seriously. Remember the part that reads, “I will support and defend the Constitution and laws of the United States of America against all enemies, foreign and domestic.” Trump, it seems, is that domestic threat to our republic. A growing number of people he believe hasn’t entirely renounced all allegiance and fidelity to any foreign prince, potentate, state, or sovereignty. What he has done is inspire a new generation of white nationalists willing to go to war at Walmart in El Paso or the Gilroy Garlic Festival.

As for the red-baiting term “socialist,” Bernie Sanders is about as much of one as President Franklin D. Roosevelt was and he brought you Social Security.

Alexandria Ocasio-Cortez, Rashida Tlaib, Ilhan Omar, Ayanna Pressley and Katie Porter, you are the Daughters of the New American Revolution and we as a nation should honor you for your patriotic, courageous service to this nation in this time of conflict, fear and hate. One day, we will look back and call you heroines or simply heroes — it really doesn’t matter what’s politically correct as long as you get the job done and stay true to your ideals.  Keep fighting!

The revolution will not go better with Coke

The revolution will not fight the germs that cause bad breath

The revolution WILL put you in the driver’s seat

The revolution will not be televised

However, the counter revolution is being fought on twitter — JPA, 2019