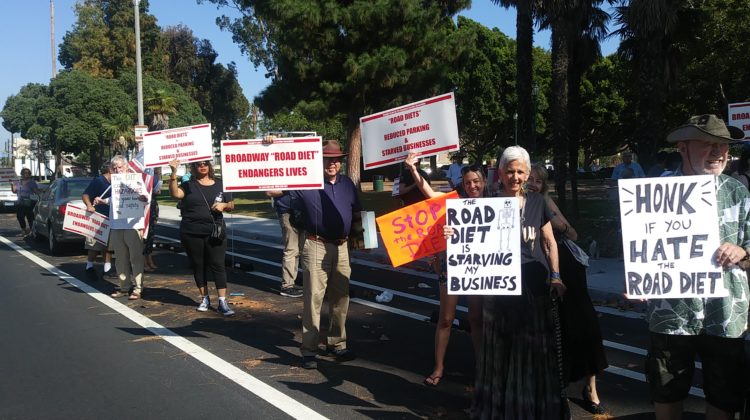 City officials are touting the Long Beach road diet a success, but their numbers are successfully confusing.

The Broadway Corridor Safety Improvements Project was completed in May 2019. Since that time, Long Beach City Hall engineering department reported collisions along the roadway from mid-April to the end of June were down 20 percent this year from the prior five-year average for those same months.

A spokesman from the Engineering Department said the primary goal of the Broadway Corridor Safety Improvement Project is to reduce speed. Their data has shown that collisions are most frequently caused by motorists and motorcyclists that drive “too fast for conditions.” And, reducing the speed at which motorists travel is essential to creating safer streets. 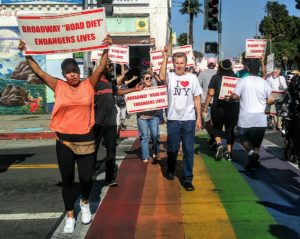 Progress is slow and confusing. Demonstrators protest, July 15, at a rally on Broadway road diet organized by Robert Fox. Photo by Diana Lejins

Collisions are down but it seems residents and businesses in the Broadway corridor have varying opinions on the new road diet. This is common with change, especially with a situation as fraught as parking in this and other areas of downtown Long Beach. So much so that on July 15,  city council candidate Robert Fox organized a demonstration against the road diet. Fox, a Broadway corridor resident is going after District 2 Councilwoman Jeannine Pearce, describing her as inattentive and unresponsive to the issue.

For her part Pearce, one week later, on July 22, requested that the city management to host a media briefing on the matter. At that briefing City Manager Pat West said that city staff would be making tweaks to the Broadway road diet’s design and that they will begin a listening tour to hear more from Broadway businesses that may result in additional changes.

“Change is hard,” Pearce said. “We encourage you to report all accidents to PD, so we can continue to collect data, because we don’t know what we don’t know. My number one goal is your safety.”

LBPD public information officer Arantxa Chavarria reported that the data released over a week ago at a briefing shows:

From mid-April to June 30, 2019 there have been 19 reported collisions on the Broadway corridor. Involving one pedestrian, one bicyclist, four DUIs and five involved parked cars.

Of the 19, only nine can be directly attributed to the East-West corridor. The remaining 10 involve vehicles traveling north or south.

If these numbers look confusing, they are, because the City Hall and LBPD numbers seem out of alignment. However, this average of 11 for the four prior years appears to be in contrast to the nine collisions in the same time period for 2019. Random Lengths News requested clarification  from the LBPD, but the spokeswoman did not respond before publication.

The Long Beach City Hall Engineering Department reported that the Safe Streets Long Beach Action Plan aims to eliminate traffic-related fatalities and serious injuries by 2026. The road diet project is aligned with this program and to meet this 2026 goal — approved by the Long Beach City Council in 2016 — the city has developed the Safe Streets LB Action Plan, which proposes a series of plans called Keystone Actions to move Long Beach towards zero traffic deaths and serious injuries.

These actions will be used to evaluate how the road diet is working, or not. As part of the project City Hall has reported they responded to community requests for increased parking by performing street work and restriping on adjacent streets – First Street, Second Street and Appleton Street, adding more than 160 new diagonal parking spaces. Additionally, city staff continues to walk the corridor to identify refinements to the design. For example, they have shortened some of the bus zones and curb markings to add more parking.

As far as increasing the total number of parking spaces along the corridor, City Hall does not have those numbers — unlike diagonal spaces, which they typically have numbers for. The parking along Broadway is generally unmarked and varies based on the length of vehicles and how closely they park next to each other.

The demonstration that Fox organized drew between 75 to 100 participants. Fox has called for reconfiguring the street with public input.